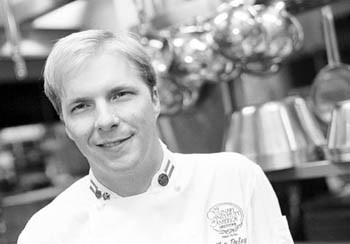 Relax, this is a cooking story about a culinarily challenged food writer in way over her head

OBVIOUSLY no notes were taken. My hands were too busy chopping, peeling, charring, slicing, and dicing. But here’s how I remember it. It was one of those great perks of the profession–a chance for an insider glimpse of Greystone, the CIA’s St. Helena campus for culinary higher education. We weren’t just going to visit the West Coast branch of the legendary Culinary Academy of America, we were actually going to make dinner in the great halls of designer-food prep. Alfred Hitchcock would have loved this monstrous estate, the former Christian Brothers winery, with its terraced herb gardens, in-house Wine Spectator restaurant, and up high on the third floor–in a space large enough to host the Olympics–a state-of-the-art kitchen where the great and would-be great chefs of the world come to take refresher courses in trends du jour.

On the day in question I and my 10 media companions (most of whom possessed serious culinary training) had already toured the cooking academy’s organic gardens, lunched too well at Tra Vigne, shopped in the 100-degree heat that coaxes the vineyards toward harvest. And this was before we arrived at 5 p.m. on the dot in the CIA’s 15,000 square feet of European ovens, hearths, and rotisseries, punctuated by granite workstations and enough stainless steel to build a Mercedes for every man, woman, and child in the Bay Area.

Restaurateur John Ash, an avuncular food guru with a mordant wit, met us with encouraging words–“Just ask me if you need anything”–a thick sheaf of recipes, and a wardrobe of regulation whites. We were all required to conform to the kitchen’s dress code. Even though it was still 99 degrees in that cavernous third-floor classroom, we had to wear long pants, long white coats, and those puffy white hats with thick, hot bands tight against our sweaty little foreheads.

It got worse. Wearing all of this gear, and wiped out from the full day of touring and eating (OK, and wine-tasting), we broke into teams and began scavenging ingredients for Ash’s ambitious recipes. We were literally running from station to station, grabbing produce, knives, mixing bowls, pans, and spices, and drinking gallons of spring water the whole time.

Ash may be an all-organic kind of guy (we were all using fabulous fresh produce from the CIA’s garden, as well as tomato products from the organic leader, Muir Glen), but he has the soul of a sadist. The recipe I was responsible for–black bean gazpacho salad–called for no fewer than 20 ingredients to be chopped, roasted, minced, pitted, seeded, drawn, and quartered. When Ash casually added, “Why don’t you double that recipe?” I considered staging a petit mal seizure. As fate would have it, I was assigned to join the only other people in the group who, like me, were culinary idiots. We were three food writers who could barely locate the working end of a toaster.

The next four hours were agony. The pressure grew to science-fiction proportions. We were cooking for trained chefs, using the most expensive equipment on the planet and, ideally, avoiding dismemberment–in the extreme heat–all in a kitchen so well organized that you couldn’t find a damn thing! Since the cooking area is literally the length of a football field, even when we did find the right knife, or more lemons, it took five minutes to get back to our assigned workspaces.

I asked God to send me in-line skates. He refused.

WHY AREN’T there more suicides in the world of chefdom? I pondered this mystery as I began grilling red, yellow, and green jalapeño and serrano peppers over an open fire, while struggling to remove jicama peel, roast four ears of corn, husk a dozen tomatillos–after toasting them–and find something with which to squeeze six stubbornly resistant limes. One by one the peppers hurled themselves off the grill into the extremely expensive gas burners. I retrieved them by means of long, pointed instruments, though my fingers were completely gunked up with sticky, charred pepper skin.

The clock was ticking.

In my delirium of peeling, seeding, and bias-cutting all those muy potente serranos, did I forget the rule about not touching your eyes while handling chile peppers? Duh! Eyes burning, tears streaming down my face, I scraped the blackened skins off 24 peppers and begged for deliverance. It arrived in the confident form of Max Duley, the kitchen’s operations manager and a man who knows his way around a wire whisk. Duley advised me on chopping cilantro in mass quantities while not letting the tomatillos burn–and uttered soothing mantras like “You’re doing fine” and “Only six more cups of cucumbers to mince.”

Was I stressed? Were the finalists on Survivors stressed?

Let’s just say that boot camp would have been a spa compared to this–and yet I could not stop. I couldn’t insist that I’d made a big mistake, put down my knife, and run away very fast from the wayward peppers and half-peeled cukes.

Thank God Ash had simmered the black beans in advance.

Others around me had slipped into that trance zone where only the hands remain functional. But unlike me, they knew what they were doing. They actually appeared to be having fun, as I struggled to keep from cutting off my fingers.

If there was an upside to this fiasco–in addition to some surprisingly edible results–it was getting to play in a kitchen that could have brought Martha Stewart to orgasm. It was beyond well stocked. All those German knives you’ve always coveted but couldn’t afford. They were there. So were Italian serving utensils, an endless supply of mixing bowls, even a pizza oven and tons of clean dish towels. It was total foodie fantasy, but by 9:45 p.m., when we actually finished cooking, we were all too tired to care about anything but the Bonterra organic wine.

Now I know why so few real cooks enjoy eating their own cooking. They’re too wasted. We sat, in stunned silence, like marathon runners whose endorphins have hit overload. I always knew that professional cooks had to have talent. Now I know they also have to be masochists. My night at the CIA was an affair to remember.

But it will not be repeated.