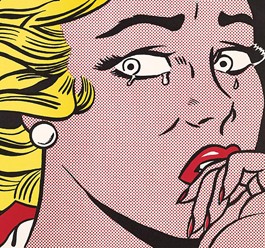 As a child, a sickly Andy Warhol spent long winters in bed, entertained by the medium of the day—comic books. Years later, when the future “prince of pop art” abandoned commercial illustration, he famously painted a can of Campbell’s tomato soup that would forever change the perception of what is considered art. Further appropriating commonplace cultural images, in 1981, Warhol returned to comics for his Myths series, using Mickey Mouse and Superman as subjects of large-scale paintings.

Stories like this inspired Schulz Museum curator Jane O’Cain as she procured art for “Pop’d from the Panel,” a group exhibition opening June 25. “Pop’d” explores how comics have influenced artists like Warhol, Wayne Thiebaud, Christo and Jean-Claude, and Roy Lichtenstein, as well as contemporary artists.

“For many of that generation, comics were their entrance into art, and that early influence rose up later in their lives,” says O’Cain, as she shares a sneak preview of a