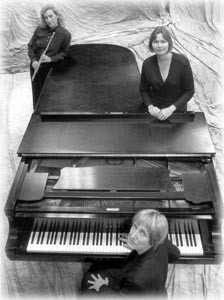 HARKEN BACK, if you will, to those gentler times of past centuries, when after-dinner entertainment might include sipping liberal amounts of port, sitting up ramrod straight on prickly horsehair cushions, and patting a white powdered wig into place–all while listening to music with the king, the queen, or any other idle nobility who might wander into the room.

An evening’s entertainment indeed, to be thinking lazily of lashing the serfs while Brahms himself sat before you, humbly playing out some little ditty that has lasted in greatness and power oh these many years. Because, of course, before Prozac and Monday Night Football we relied upon one another for entertainment, and musicians were on call to provide it.

And such music, composed to be performed by only that number of musicians that could comfortably fill a 17th- to 19th-century room already full of women wielding 8-foot-wide gowns, is named for the rooms themselves: chamber music.

“At that time,” says Petaluma classical guitarist John Stover, a former professor of music at Memphis State University, “you have to remember, musicians were servants and were treated as such. It was like, ‘Hey you, we’re having people over on Thursday. Write something.'”

Conductorless and collaborative, and as written by everyone from Bach to Bartók, chamber music is the oldest new darling of the local scene, with three ongoing chamber series (those sponsored by the Redwood Arts Council, the Russian River Chamber Music Society, and Santa Rosa Junior College) and a new one just being added at Sonoma State University.

And while too big and too lucky with gifted conductor Nan Washburn to technically be termed a chamber ensemble, there’s also the innovative programming performed by the Rohnert Park Chamber Orchestra.

Chamber music is evidently pulling a lot of strings.

Now playing at a chamber near you…

“There’s a good reason for it,” says Stover. “It’s a damn sight cheaper than a 70-person orchestra. And,” he adds, sounding more like a professor, “there’s an intimacy to that kind of music that people really enjoy. The gentleness of it appears.”

Gary McLaughlin, artistic director of the Russian River Chamber Music Society, heartily concurs. And as he’s seen this small-is-big phenomenon growing, so has his delight. “Almost all of the other art forms are going down [in popularity]: symphony, opera, ballet. People want something more intimate. And,” he adds with a small chuckle, “there seems to be something rather elitist about having a conductor . . . a king.”

Kingmaking is part of the appeal of the Redwood Arts Council’s Chamber Music in Occidental, a series that features unusual interpretations of chamber restrictions, ordinarily selling out their 140-seat church venue with an emphasis on the intimate.

For example, their first concert of the season features Chinese musician Rongchun Zhao playing the erhu–perhaps not an instrument with which Mozart was familiar.

“I don’t know anyone else who is having an erhu player,” laughs RAC president Kit Neustadter. “But what he gets out of two strings with no fret board is amazing.” Past Chamber Music in Occidental performers include the 12th-century sacred a cappella stylings of the immensely popular Anonymous 4, as well as those pop soulsters Tuck & Patti.

“I feel like I’m a trendsetter,” says Neustadter. “There are only so many days in the month, and I don’t want to do the same as anyone else.”

Preferring also not to do as others is the Classical Chamber Music Series at Sonoma State. Pioneered by pianist and SSU music faculty member Marilyn Thompson, this program aims for intimacy with an interdisciplinary focus, as Thompson incorporates members of the university’s theater and dance departments into the performances.

Selecting six musicians from the Santa Rosa and San Francisco symphonies, Thompson plans to stage the concerts at SSU’s Evert B. Person Theatre, with the accompaniment of mezzo-soprano Carrie Stevens. As the wisdom of greyer heads generally fills chamber music halls, Thompson’s hope is to attract a younger audience.

And there is hope for the young. Generally led by either the lead violinist or merely the chin signals of one musician to another, chamber music is often compared favorably to such hip, indigenous music as jazz, as each player performs a distinct part with no doubling of effect.

“Everybody is a leader,” says Russian River’s McLaughlin of the performers. “Everybody is important. It’s a much more personal and enjoyable art form. And it’s some of the greatest work ever written. There’s a level of precision that’s beyond what most orchestras are capable of,” he says, comparing symphonic ensembles to armies.