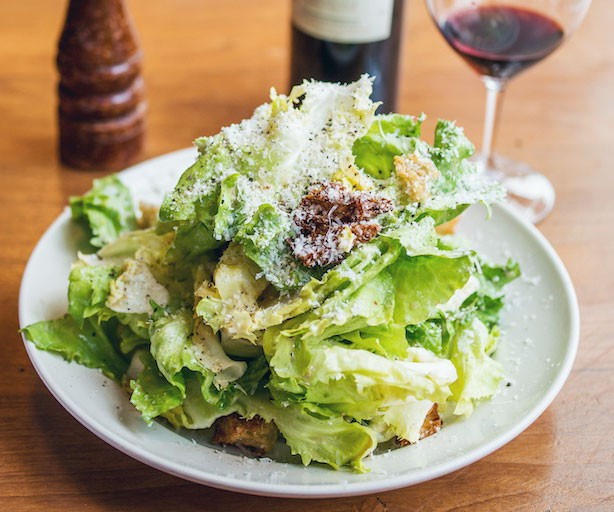 Though the caesar salad is not a classic Italian dish by any stretch, just about every restaurant has a version of it. The story goes that it was invented by Tijuana restaurateur Caesar Cardini in 1924 as an improvised dish when he was low on ingredients. It’s a borderland recipe created by an Italian immigrant, and cooks have been reinventing the dish ever since, for better or, often, worse, adding grilled chicken, mayonnaise and even fried tortilla strips. There is no “authentic” recipe since it’s been reinterpreted so many times. Apparently, the first version didn’t include anchovies.

In that tradition, Sebastopol’s Peter Lowell’s restaurant has its own take on the salad. It’s fantastic. I’ve been asking owner Lowell Sheldon for the recipe for months, and now he’s published it on the restaurant’s excellent food blog, LocalFoodMatters.org. (They’ve also got a good recipe for preserving lemons I want to try.)

For its caesar, Peter Lowell’s uses the inner leaves of escarole instead of romaine. I’ve always thought romaine was just a step above iceberg in terms of flavor, but the hearty, pleasantly bitter escarole stands up well to the bold dressing. It’s a great choice.

The vinaigrette is slightly different than most others I’ve tried in that it includes lemon juice and red wine vinegar. It also contains a bit of sugar to offset the acid. It’s rounded out with the umami-rich flavors of anchovy paste and Worcestershire sauce. And it’s got plenty of garlic.

Caesar salad recipes will continue to evolve, but I’m content to stick with this one.