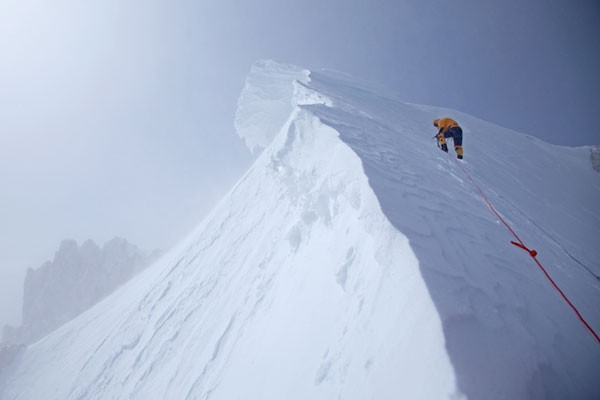 Talking with the filmmakers of 'Cold,' Banff's grand prize winner, on life, art and suffering

As the camera pans away from the glare of the rising sun, jagged white-and-blue ice peaks fill the screen. The tallest catches the first pink light of dawn. In the foreground, we see a climber encased in his red down survival spacesuit. He is walking very, very slowly, inching up a steep knife-edge ridge toward us. As the scene shifts to slow motion, we can see that he is stumbling.

Watching that scene from the film Cold at the Banff Mountain Film Festival in November, I nearly choked with dread. Ten minutes into the film, I had already come to care about this climber and his two partners, who, alone in the world’s highest wilderness, were trying to do one of the most difficult things any human has done. Their quest had become an epic metaphor, and the man at the center of the story was my new hero (or antihero).

Cold, the grand prize winner at the Banff Mountain Film Festival, which arrives in Larkspur this weekend, documents an expedition on Gasherbrum II in the Pakistani Himalayas, the first successful winter ascent of an 8,000-meter (26,246-foot) mountain by an American. It succeeds as an adventure flick, and more so as a powerfully moving self-portrait of the young Boulder-based climber and photographer Cory Richards, who shot the film, which was brilliantly directed and edited by Anson Fogel.

Marshalling a combination of artistic courage and cheerful punk-rock belligerence, these two men, along with the writer, Kelly Cordes, have created an astonishing 20-minute masterpiece that has been wowing audiences and sweeping festivals all winter long.

Cold brings the adventure documentary into new territory that seems perfectly suited to its two subjects: elite alpinism and the soul of a mountaineer. Just as the new breed of pure alpinists scorn the armies of porters and the boatloads of gear that characterize modern “siege” mountaineering (shunning even supplemental oxygen), Cold steers clear of the macho glamour that too often surrounds the adventure sports scene. It feels raw, real and truer than any outdoor film I’ve seen.

The film is almost halfway over by the time we get that first full-blown panoramic alpine shot. Prior to that, we meet Richards and his fellow climbers, Simone Moro of Italy and Denis Urubko of Kazakhstan (both of whom are superstars in mountaineer-worshipping Europe), in a series of scenes that illustrate the grueling and human-sized—rather than the heroic or grandiose—aspect of the enterprise.

We are with the men inside their dark tent, where the walls have iced over and spindrift crystals swirl about while Moro coughs incessantly. And later we’re inside a bright tent as the two veteran mountaineers engage in a comical dialogue made more charming by their quirky and creative command of the English language. But mostly, we are inside Cory Richards’ head as he battles death and demons.

“I love the mountains. Grew up in them, climbing with my dad. He gave me this. But I was such a fuckup. Until climbing.

“What the fuck am I doing here?”

As the days tick by and the men climb, the temperature drops into the low minus-40s. When they summit, Moro is curled in a ball, coughing and puking into the snow. And the real ordeal hasn’t even begun.

Talking about their film in a cafe at the Banff Centre the afternoon before the film was awarded the grand prize, Richards and Fogel seemed to be still struggling to understand this thing they had created together.

Cold‘s triumphant screening at Banff occurred fewer than nine months after the expedition it documents. Its creation was apparently a flurry of networking and partying followed by a creative marathon.

It began with an email from a friend. While still in Pakistan, Richards had uploaded some raw footage to a blog maintained by the North Face, the expedition’s sponsor. That could very well have been the end of it; Richards was there primarily as a still photographer to document the expedition, and the video footage was bonus. But the posts blew up, drawing upwards of 30,000 views. Julie Kennedy, founder of Climbing magazine and the 5 Point Film Festival, saw some footage of a particularly riveting moment of grief and terror, and forwarded a link to Fogel.

‘”There’s something incredible here,'” Fogel recalls thinking. “But immediately I thought, ‘This needs to be something different.’ Because—I’m not a mountaineering filmmaker; I just want to make films about the human condition. I saw these clips and was just immediately like, ‘Wow, there’s something really true and real and essential going on there.’ And kind of dark, which appeals to me too.”

When the two men met, they quickly determined that this thing was going to happen.

“A film can only be made if there’s lots of trust between the filmmaker and the subject,” Fogel says. So he was blunt: “I said, ‘You’re going to have to bare your soul onscreen. And it’s not going to make you look like a hero.'”

That was just fine with Richards, who, incidentally, has since been named a 2012 Explorer of the Year by National Geographic. “I’m always horrified when I go climbing,” he says. “I spend the entire two months scared. You go through icefall and see all these huge pieces of ice that came down since the last time you were there. And you know that it could happen again at any second.

“You’re exhausted. You’re dehydrated. You’ve got nothing left so you do something stupid. Or you’re just too tired to do something smart. Like—on your down suit, there are these little eyelets that you fasten your mitten to so you won’t lose it. And you forget to fasten it. Then you reach down to tie your boot or something, and your mitten falls out of your coat where you stuffed it and it blows away. You’re probably going to die.

“It’s fucking terrifying. And I really believe all alpinists experience that doubt and fear, and the experience of working through it. And you leave base camp knowing, ‘This could be it. This might be it.’ But you try not to think of it on that frontal level.”

Richards says the film managed to portray what he loves about alpinism: “When it’s not about getting to the top, but about climbing. The soul of climbing. When you’re pushed to a place where you’re having to look into why you’re doing it.”

Fogel, whose production company, Forge Motion Pictures, produces high-end TV commercials as well as adventure films, had invited his friend Kelly Cordes, an alpinist who writes for Patagonia’s blog, to join him and Richards in Carbondale, Colo.

“We spent a day and half there, sitting at my house talking and drinking tequila,” Fogel says. “And that was essentially the interview. We talked about what we thought the film should be and decided that it was going to be pretty weird. And we knew that was risky.”

Again, that was mother’s milk for Richards, who apparently spent his adolescence at war with the world.

After starting high school in Boulder two years early, Richards says, he “got screwed up by the social imbalance” and dropped out at 14.

“I hated authority,” he says. “I was a little shit and I didn’t listen to anybody. Anybody who said I had to do something, I was like, ‘No, I won’t do it.’ I was such a junk show that my parents basically threw me out of the house.”

He spent the next couple of years couch-surfing and barely avoiding the street. “In that time,” he says, “I think I developed an ability and an aptitude to suffer.”

Bottoming Out at 8k

Richards’ ability to abide suffering is evident from the first frame of Cold to the last. But it is the veteran Simone Moro, a longtime hero of Richards, who is clearly in the worst kind of hurt.

We learn in an early scene that the trio has decided to take advantage of a two-day break from winter storms to reach the peak. That means breaking camp before they’ve been able to fully acclimate to the altitude. And it means racing the weather up the mountain.

“We were going at a pace that was sort of a gamble,” Richards concedes, then adds, “a very big gamble.”

For Moro, the leader of the expedition, the result was a bad altitude cough, a condition that alpinists frequently face.

“He’d get up in the morning and cough a lot,” Richards recalls, “and he was coughing blood. His lungs were just raw. He suffers more than anybody.”

Richards addresses the situation matter-of-factly in the film: “In the morning, Simone pukes, and we all piss so dark it looks like blood. The storm rages harder. We pack up our gear and work our way down.”

For Fogel, the ordeal came later. Having gotten all of the raw footage from Richards, he had to race to get it produced in time for showing at the 5 Point Festival, which takes place in his hometown.

“I logged all the video in three 16-hour days,” he says, groaning from the memory. He then had less than two months to cut and mix the whole thing.

Sitting in Banff six months later, before Cold won the biggest of its string of awards, both men are adamant that the other deserves the lion’s share of the credit for its success.

Richards is proudest that Moro, his friend and onetime idol, likes the finished product: “Simone said, ‘It’s the first time I’ve ever seen an honest movie about mountaineering.'”