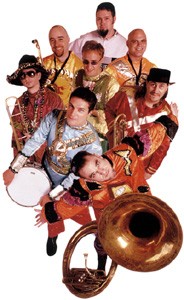 That Funky Monkey: Brass Monkey bangs a gong on April 5 at Sweetwater.

How can you not love a band that plays a song called “Drugged and Beat Up,” a sassy second-line strut that reels drunkenly with the rumbling rhythms and feel-good vibe of a Mardis Gras celebration? The song, which can be heard on Brass Monkey’s 2001 debut CD Live in Time and Space, is a staple at this popular brass band’s live shows, along with such standards as “When the Saints Go Marchin’ In” and “Do Wah Diddy Diddy” and pumped-up covers of Led Zeppelin.

For the past couple of years, Brass Monkey –a nine-member brass and percussion ensemble fashioned after the rollicking New Orleans bands that traditionally played at the Crescent City’s social clubs and funerals–has been building a considerable following through shows at Bimbo’s 365 Club and the Elbo Room.

Of late, Brass Monkey, featuring Sonoma County trombonist Adam Theis, have been making headway into the North Bay music scene with shows at the Mystic Theatre, and stints at the Falkirk Cultural Center in San Rafael and the first annual KRSH/Luther Burbank Center Rhythm and Roots Festival.

Brass Monkey makes their Marin club debut on Saturday April 5 at Sweetwater in Mill Valley. Suffice to say, the band will be raising the roof at that intimate saloon.

Formed in 1999 to play a Fat Tuesday party, Brass Monkey is the brainchild of tuba man Jon Birdsong (who has performed with Beck and Victoria Williams) and drummer Kevin Stevens. The band’s high-octane, highly danceable music–a punkier version of the fabled Dirty Dozen Brass Band–has become a hit thanks to its wild, barely tamed nature.

These days, the band includes an eclectic mix of musicians who have performed with the likes of the Barnum and Bailey Circus, Santana, KC and the Sunshine Band, Pharoah Sanders, the Glenn Miller Orchestra, Cannonball, the Marcus Shelby Orchestra, Polkacide, Casino Royale, and the New Monty Show.

The Radiators–whose Colorado-by-way-of-New-Orleans jams have been listed as a major influence by Phish, the Spin Doctors, Widespread Panic, and a host of others–perform Thursday and Friday, April 3 and 4, at 19 Broadway in Fairfax. Tickets are $23 each day. Showtime is 9pm. Call 415.485.0375 for details.