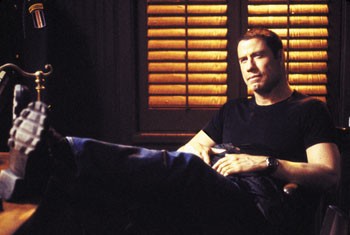 Icon Status: John Travolta’s 31 films have made him the 20th biggest movie star of all time.

An American icon reflects on his status

It’s Thursday, Feb. 18, 2003–Travolta’s 49th consecutive celebration of his own birth–and the big day has been a butt-kickingly busy one for the energetic birthday boy. Since early morning, the one-time TV Sweat Hog has been doing back-to-back interviews, working against the clock to promote his new movie–John McTiernan’s sneaky, military-themed whodunnit Basic–before he’s due on a movie set in Baltimore to film Touchstone’s big-budget fire-fighting epic Ladder 49 with Joaquin Phoenix and Robert Patrick.

Though he’s been rushing from appointment to appointment up and down the state of California, Travolta is the very picture of calm as he ambles into a San Francisco meeting room clad in black jeans, black T-shirt, close-cropped hair, and a smile big enough to land a jet plane on. Looking fit and trim, Travolta is in a playful, even philosophical mood, trotting out words like “frequencies” and “subcommunications” and “levels of complication” while picking and teasing at his quarter-century as a certified, shape-shifting American icon.

And John Travolta is an icon.

From the moment he walked down the street with a couple of paint cans in the opening of Saturday Night Fever, coerced Olivia Newton John into dressing up nasty in Grease, and rode that mechanical bull in Urban Cowboy, Travolta has fused himself into the culture. He survived several dark years appearing in talking-baby flicks and poorly conceived dramas (anyone remember Moment by Moment?), then pulled off a stunning, career-saving resurrection with Pulp Fiction, playing a heroin-addicted hit man alongside Samuel Jackson.

His fortunes revived, Travolta followed Pulp Fiction with an awe-inspiring stampede of a dozen films, most of them reasonably good: Get Shorty, Phenomenon, A Civil Action, Primary Colors, Battlefield Earth (OK, OK–we’re joking about the last one being good). In spite of the occasional misfire, if you look at box-office results, Travolta currently ranks as the 20th biggest movie star of all time. His 31 movies have earned a total of nearly $2 billion at the box office, an average of $60,583,274 per film, outperforming overall such powerhouses as Robert De Niro and Arnold Schwarzenegger. Not bad when you consider that many of his fellow ’70s-era icons such as Burt Reynolds and James Caan have all but disappeared, buried beneath the weight of their own legends.

“I’ve been thinking about this a lot lately,” Travolta says. “The icon thing, in some ways, has benefited me while it may have hurt others.” With Pulp Fiction (a film he jokingly calls “a two-hour-and-45-minute art film”) Travolta was playing against expectations, and it was a joy to watch. “Without the iconic baggage that I had going into Pulp Fiction,” he says, “it wouldn’t have been the thing that it was. It helped the film rise to a new communication of pop culture.”

With a laugh, he adds, “People were probably commenting on that at the time, but it only dawned on me recently.”

In Basic–set during a torrential hurricane on a U.S. Army base in Panama–Travolta plays Tom Hardy, a shady Army Ranger turned DEA agent investigating the disappearance of bad-ass sergeant Nathan West (Samuel Jackson), who was apparently killed, along with several of his Special Forces trainees, during a routine training exercise. While some viewers may not be able to follow the convolutions of the plot–think of it as The Usual Suspects on amphetamines, and in the rain–Travolta liked the script with its twists and turns and surprises.

Of course, the opportunity to reteam with Samuel Jackson was another of the project’s enticements. Unfortunately, since the action in Basic cuts back and forth between Hardy’s investigation and flashbacks involving Sergeant West and his Rangers, there isn’t a lot of union in this reunion. Even so, Travolta believes their alternating performances meshed well, since they share a similar rhythm as actors.

“There is an effortlessness to us together, which I always appreciate,” Travolta says. “There’s a frequency that we both tune into that’s different from a lot of actors, a chemistry that is difficult to explain–but happens to be a fact.”

In preparing to play an Army Ranger, Travolta trained with members of the 75th Ranger regiment at Hunter Army Air Field in Columbia, Ga. Though not mandatory–he’s played soldiers in several of his films–Travolta says he wanted to earn the Ranger tattoo he shows off in the film.

“It was awesome, training with those guys,” he nods. “They were very generous. But there was a poignancy to the experience as well, because the next week they were off to the Middle East. It’s one thing to go out and train with them, where it’s all movielike and it’s all fake–the guns are real and the grenades are real, but the targets are these pop up things, and it’s cool and it reminds you of Hollywood. But then they’re all packing up their bags to get on a plane to the Middle East, and you go, ‘Oh my God! This is what they’re actually going to do in maybe four or five days from now.’ They’re sweet guys, and I don’t know if they’ll be coming back.”

Asked what plans he has for his future, what roles he imagines that he’d like to play, his grin returns.

“My future lies in the imagination of writers,” Travolta laughs. “If you’d said to me, 20 years ago, ‘You’re going to play a heroin-addict hit man, then a president of the United States, then a lawyer, then a DEA agent, then a fireman–I never would have come up with that plan. If I ever slowed down enough to ask what kind of role I want to play, I feel like I’d miss out on something.

Basic opens Friday, March 28, at theaters throughout the Bay Area.