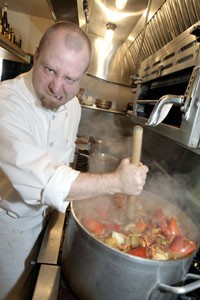 Oh, the hazy lore of Louisiana, of eccentric redneck Cajun folks and their love of pork products and hot sauce; of fatty Paul Prudhomme and his assertion that there are over 50 types of roux; of tragic French Quarter brothels and Anne Rice vampires; of rowdy, drunk sorority girls flashing their tits to get Mardi Gras beads tossed their way. It’s all been written, filmed, drawn, and sung. And eaten, over and over again: gumbo and crawfish étouffée and jambalaya and boudin and beignets and cheap, pale gold beer in cans.

There’s not much in Northern California that evokes sleepy drawls and zydeco stomps, making restaurants that peddle Cajun and Creole cuisine an anomaly. Mudbugs Cafe in Mill Valley is rapidly gaining a following by making the smart move of keeping the Louisiana influence on the menu and not the setting. The food is authentic enough soBig Easy traditionalists will not scream bloody murder upon seeing their barbecued shrimp or sipping their Cajun martinis.

Mudbugs opened last August in the downtown space once occupied by the Avenue Grill. It is owner Scott Fearon’s first go at primary proprietorship, although he previously invested in a number of Bay Area restaurants.

The first thing we noticed about Mudbugs was the valet parking. The second thing we noticed was that although Mudbugs has valet parking, it’s still a very casual and welcoming place. There’s a slightly cramped indoor dining area, as well as an enclosed outdoor patio. The decor is dark and stylish without being overbearingly hip. The bar was hopping by 7pm, but Mudbugs is also very kid-friendly; we noted an equal ratio of swinging-single types to families with young kids in tow, creating a great, everyone-belongs atmosphere.

We started with the Louisiana crab cakes ($10), two plump cakes atop a radish slaw with a Creole tomato-mustard coulis that was more like a French remoulade. The tart, crisp slaw and the coulis were terrific, but the crab cakes–fried to perfection–had a gummy, bready interior whose texture was more that of croquette than crab.

We split an arugula salad with toasted pumpkin seeds, Pt. Reyes blue cheese, an apple-vanilla vinaigrette, and a small fan of crisp Granny Smith apple slices. The bite of the baby arugula stood up to the crumbles of pungent cheese, and the vinaigrette was well-balanced.

Everyone that night was leaning toward the Cajun side, so we all ordered entrées from the box on the menu that read “Traditional Favorites”–e.g., jambalaya, a sort of anything-goes festival of meat, seafood, vegetables, and rice (much like its Iberian distant cousin, paella).

The other half of the menu presented less heavy, more California-style cuisine with a few Louisiana touches to ground it, such as seafood pasta and a cider-cured grilled pork chops with mashed sweet potatoes and rosemary biscuits. You won’t be finding smoked salmon jambalaya or Mediterranean lamb gumbo or any such fusion-happy foolishness on chef
Mike Jewell’s menu.

For lay people, it’s moderately confusing to tell the difference between jambalaya and étouffée, since both are piles of rice ‘n’ stuff. Mudbugs’ jambalaya ($13) featured meaty morsels of tasso, andouille, and chicken all smothered in tomatoes, onions, and peppers. It was heavy-duty but divine.

Étouffée derives its name from the French étouffer, which means “to smother or suffocate.” In Mudbugs’ case ($18), crawfish and rock shrimp are the subjects of the suffocation via a dark roux; it’s all served over “Southern rice,” which was pale orange and vaguely tomatoey like Spanish rice.

I tried the gumbo ($7 for a small bowl). With gumbo, it’s either right or wrong; though the stew has many variations, there is a gumbo thing. A gumbo without the gumbo thing is as easy to identify as a rubbery low-fat scone. Mudbugs’ gumbo has the thing. Its flavor was redolent of a quality dark, no-shortcuts roux, and its tidbits of fish, crawfish, crab, shrimp, oysters, and okra were not cooked to death in some steam table. In other words, the stew was stewed but not obliterated. Though my order was a small one, it was filling enough for a dinner entrée.

All of the above dishes were spicy in a flavorful way, but the kitchen at Mudbugs keeps the heat side of spicy on the mild end. I’m slightly shocked that they don’t offer hot sauce on the tables, but then again, we didn’t ask, though our server, who was amazingly on top of it, probably would have obliged. When Mr. Bir du Jour mentioned his love of the hot kind of spicy to our server, she offered to relay this information to the kitchen, who’d “spice up” his voodoo shrimp ($16) for him.

The voodoo shrimp is a takeoff on barbecued shrimp, which used to be on their appetizer menu, according to our waitress. But Mudbugs’ chef toyed around with it, adding creamy grits as the starch and crowning the shrimp with a few fried oysters. New Orleans­style barbecued shrimp is not normally spicy-hot. New Orleans barbecue shrimp are, in fact, not even barbecued; they’re baked in a ton of butter that’s spiked with Worcestershire sauce. Typically, the shrimp are cooked unpeeled, so the diners pluck greasy shrimp from a communal pan and make a wonderful, savory mess peeling shrimp and sopping up the fallout with a stack of napkins.

Voodoo shrimp were the big hit of the night. The spiced-up sauce melded with the soft grits perfectly, and the shrimp (already peeled, alas) were steamy and tender. Mr. Bir du Jour, who lives in mortal fear of all that is slimy, even enjoyed his tasty fried oysters. My only complaint is that New Orleans barbecue shrimp is best served with hunks of crusty white bread to soak up the sauce. Though our waitress kept us stocked with tender and cakey sweet cornbread throughout our dinner, it was not the same.

Amazingly, our stomachs–so swelled with rice ‘n’ stuff–had room enough for dessert. Creole bread pudding and bite-sized beignets with cappuccino dipping sauce sounded delightful, but we went with the banana cream dream ($6), which was like a refined banana cream pie, layering dainty slices of ripe banana with whipped cream, sponge cake, and banana cream on a graham cracker crumb base. While it was tasty, I was in my heart wishing for the more gloppy, white-trash joys of banana pudding.

The wine list at Mudbugs was quite impressive, with a good variety of food-friendly selections, both domestic and imported. However, we ignored it. I’m of the persuasion that this kind of food loves a good pilsner. So why, then did we all order Pyramid hefeweizen? Because it was so damned good, that’s why, embodying the floral aroma and full, crisp body of a textbook hefeweizen. I got a little silly after putting back a hurricane, one of those famous New Orleans cocktails. It’s sticky-sweet with passion fruit juice and grenadine, but sneaky-blotto with Bacardi 151.

There are a few Louisiana-inspired restaurants up and down the North Bay (Catahoula in Calistoga and GTO’s Seafood House in Sebastopol come to mind), but Mudbugs’ menu seems to be the most Louisiana-centric of them all. It’s a glorious thing. Instead of messing around trying to evoke Spanish moss and Mardi Gras all over the place, Mudbug’s keeps its interior simple and natural.

My dad spent some formative teenage years in Louisiana. It’s my understanding that that’s where he first mastered the practice of underage drinking. The man has zero tolerance for bullshit, a leather tongue, and he–the most un-Northern California fellow I know–would go nuts for this place. It’s a rare establishment that could score the Original Mr. Bir stamp of approval, but I’m glad to say that the appeal of Mudbugs Cafe easily extends beyond my dad.