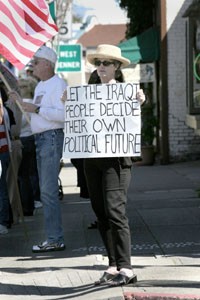 Picket Line: Peaceful protests have been going on in Sebastopol for months.

Protesters of all stripes evoke ire

When local high school student Sierra Aizer-Keck and her friend were protesting the war in Iraq during the antiwar protest on March 20, they decided to join in by blocking an intersection in Santa Rosa. They linked hands with other protesters in front of a car waiting to go straight through the light. The man in the car put his foot on the accelerator and drove straight at them. The girls were thrown onto the hood of his car and rode for several yards before the man finally stopped. The girls got off the car unharmed, and the man drove away.

“He meant to do it,” says Aizer-Keck. “We weren’t aware he was going to accelerate. We weren’t hurt, so we didn’t do anything about it.”

Before nearly running the girls over, the man driving the car told them that he supported peace, but he was late for work.

On March 20, 50 protesters were arrested in downtown Santa Rosa after hours of snarling traffic and causing havoc. Though there have been few other incidents in Sonoma County, all over the Bay Area protesters continue to use more aggressive tactics such as blocking intersections, staging sit-ins and die-ins, and creating other disturbances.

Many rallies and protests, whether anti- or pro-war, are now tinged with an air of anxiety as if they could erupt at any moment. Some people are wondering whether, in the case of the antiwar movement, the aggressive tactics hurt the peace movement more than they help it, while others feel that it’s important to jolt people into realizing that business as usual no longer applies.

Most protesters realize they are inconveniencing people with their tactics, but many feel that aggressive dissent is an important tool for getting their voices heard.

“I think the protesters are doing a great job,” says Santa Rosa resident Sherman, who, like many people interviewed about the protests, didn’t want his last name used. “When Martin Luther King marched, there was a tirade against it; when women marched for suffrage, people were against it. You gotta do what you gotta do to create change.”

Protesters feel that a little inconvenience is nothing compared to what the war is doing to Iraq. By demonstrating, they are asking how can we just go about out lives like nothing is wrong when we are causing so much violence somewhere else?

“I regret that some people are inconvenienced,” says Patrick Burke, one of the protesters arrested in Santa Rosa. “But it does strike me as ridiculous that someone could be concerned about their schedules being interrupted when we’re blowing up people in Iraq. It seems almost comically selfish.”

Though all kinds of nonviolent protest are encouraged by the Peace and Justice Center of Sonoma County, an umbrella group that has organized dozens of antiwar protests, the organization draws the line at any kind of violence. They contend that the vast majority of protesters are peaceful, especially locally.

But others see it differently. Some are calling the protests like the one on March 20 violent, or at least provoking violence.

“I just don’t get how they can claim peace with violence,” says Dianna Murphy, who has organized pro-troop rallies in Healdsburg. “I resent the fact that here we are on high-terror alert, and our police officers have to pay attention to protesters instead of possible threats.”

Whether it’s fair or not, the perception that some peace protesters are resorting to violence and hindering innocent people from going about their daily lives may be turning some against the antiwar movement.

“I think the protests are great, but I’m not really keen on some of the aggressive tactics being used,” says Santa Rosa resident Jason. “It may make people less willing to listen to them.”

For some people, at least, this seems to be the case. Karin, a Santa Rosa resident, was initially on the fence about the war, but has since grown angry with the antiwar movement.

“I’m just sick of it,” she says. “I commute to San Francisco, and I’m tired of having my car stopped, slowed, and redirected because of protesters. The sympathy I initially had for their cause is gone. It’s one thing to hold peaceful demonstrations, but random groups stopping cars and making pests of themselves is just annoying.”

But the protests–both for and against the war–are unlikely to change people’s minds. The pro-war protest in Santa Rosa on March 22 may not have been violent, but the naked aggression of the revving cars and people screaming at passersby was unlikely to turn a peacenik’s head the other way. The Peace and Justice Center is not worried that the peace protests will turn anyone against the movement.

“I really doubt that anyone who would have to sit in their car for 20 minutes would be pro-war because of that,” says director Elizabeth Stinson. “I would argue that anyone who is stopped at a light because of a protester and turns pro-war had a tendency to support the war in the first place.”