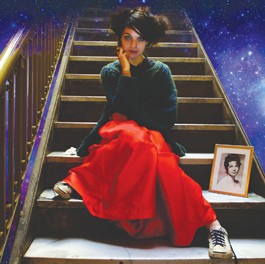 Folk chanteuse Jesca Hoop follows her path from the hills of West County to the canyons of L.A.

The last time I saw Jesca Hoop was five years ago, when we ran into each other at the Central Library in downtown Santa Rosa. She said she was planning to move to New York. She didn’t. Instead, a downscaled version of the fabled “small-town girl makes the big time” story beckoned Hoop to L.A., and now, four years later, the soft-spoken, dark-haired musician has a promising debut album, Kismet, coming out on Sept. 18.

North Bay audiences may recall Hoop from Majesty’s Monkey, the breathtaking folk duo she and Kirana Peyton formed in the late 1990s. Though sparse on instrumentation, Majesty’s Monkey performances were high on drama; a show could include multiple costume changes or props used as percussion instruments. But the stunning interplay of Peyton and Hoop’s vocals–at turns sultry, gritty and childlike–always wove a powerful spell.

The essence of Hoop’s appeal from those days is very much alive in her current material; her music is more about a place than a genre. Hoop brings alive an era that never existed but is eerily familiar. To call Hoop a singer-songwriter would not be inaccurate, but her songs are more like little puzzles that, upon multiple listens, open up to reveal different solutions.

Kismet is the result of Hoop’s years navigating the music industry in L.A. Part of the reason she landed there can be traced back to a demo. Nic Harcourt, the DJ on KCRW’s influential Morning Becomes Eclectic show, had been playing Hoop’s “Seed of Wonder,” and listeners noticed.

Hoop was living in her van in West County at the time. “Nic called me up and said people had been calling in and they wanted to know more about me. Shortly after that, the song went to the No. 1 spot on their five most requested songs.” “Seed of Wonder” stayed in the top spot for eight weeks, a station record.

Though Hoop received offers from record labels shortly after arriving in L.A., it took three years before she found an arrangement she was satisfied with, singing with 3 Entertainment, a boutique label of Columbia (“A little company inside this big old beast,” she says).

The emotional purity of Hoop’s songs (coupled with her press photos, which display a fabulous sense of granny’s attic trunk meets 1960s Sunset Strip) can impress a sense of naiveté upon a listener. In a review of Kismet, New York magazine described Hoop as “precocious”–but at 32, she is hardly a hapless urchin. She’s very savvy about channeling a sense of character in her music and her onstage persona, about reeling some songs in while letting others run wild.

Though she is fond of incorporating offbeat instruments and arrangements, Hoop’s most distinctive trait is how she uses her own voice as an instrument, periodically abandoning a traditional lyrical narrative and letting words melt into chants or gospel-tinged inflections. Her phrasing can take surprising turns, turning a song inside out and back again in one fell swoop, as it does in “Summertime,” Kismet’s bittersweet opening track.

Hoop grew up in a Mormon family in Sonoma County, and singing together was an everyday part of her life. Hoop’s parents split, and she grew away from the church, exploring a world that had been previously off-limits. Though she always kept music a part of her life, Hoop pursued a number of career paths. “I didn’t start working in [music] as a profession until I was 28,” she says. “Until then, I did everything, filtering through different interests. I was a farmer for a while, I was a construction worker, I worked in service a lot, I worked with autistic people, I was a surveyor, I was a wilderness guide–the list goes on and on.”

After spells living in Arizona and Wyoming, Hoop returned to Sonoma County, eventually forming Majesty’s Monkey. She got a job working in West County with the family of Tom Waits and his wife and collaborator, Kathleen Brennan. Hoop spent five years with them, but until a few years ago, she stayed mum about that aspect of her life. “I was always so quiet about it because I never wanted to exploit that relationship. Eventually, I let my story be my story and let the world do what it does.” But Hoop is quick to point out the support and guidance her former employers have shared with her. “It was very serendipitous. I made my decision to make a living as an artist at the very same moment the opportunity came up to work with them.”

This summer, Hoop garnered some new fans when she toured as the opening act for the symphonic pop band the Polyphonic Spree. She quickly realized that holding her own as a solo act opening for a gigantic ensemble of two dozen members has its own challenges. “I had no idea what I was in for,” she says. “The first night I played alone, and I had never played for 2,000 people alone. My sound when I’m by myself is very intimate, so I couldn’t hold the audience. But then I learned how. Every moment on that stage I was very carefully crafting the atmosphere in that room. You’re in a pool with these people, in a body together. And if you want to connect, you can’t just sing your songs to them.”

In L.A., Hoop has found kindred spirits in the old-timey duo the Ditty Bops, with whom she frequently performs. “I met them a few years ago. They’ll sit in on my set, and I’ll sit in on theirs.” And Hoop remains close to her Majesty’s Monkey co-conspirator Kirana Peyton, who still lives in Sonoma County and performs under the moniker Black Bird Stitches. “Her music is wonderful, as always. She’ll come down here every once in a while and collaborate with me.” If the stars align in all the right places, the two may even do a Sonoma County show.

Hoop says moving to the big, smoggy city down south hasn’t influenced her artistic outlook so much as it has her career outlook. “It’s changed drastically the way I approach music as a living and music as a lifestyle. It’s never been a hobby, but making music for a living hasn’t always been a lifestyle.” Though I’d be delighted to run into Jesca Hoop at the library again someday, at this point it seems highly unlikely. But that’s fine. The more music Jesca Hoop makes, the better off we’ll all be.