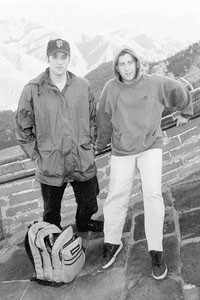 Brad Carson has the typical problems of an average college student. His car is on the fritz, he’s juggling theater courses and a job in Sebastopol, and he’s got a tired look in his eyes from staying up late to write a paper.

But unlike his classmates at Sonoma State University, Carson also now has an arrest record in China.

The 20-year-old college junior was one of 35 foreigners (including six Americans) arrested on Nov. 20 for staging a human rights demonstration in Beijing’s Tiananmen Square, the infamous site of a pro-democracy rally in 1989 that ended in the violent death of an unknown number of student protesters.

Carson and his companions were protesting the Chinese government’s violent crackdown on Falun Gong, a Buddhist-like spiritual movement. The protesters–all Falun Gong practitioners–posed as tourists for the demonstration, faking out the Chinese cops who always patrol Tiananmen Square by staging a group photo and then suddenly sitting down and unfurling a banner that read “Truthfulness, Compassion, and Tolerance”–the three main principles of Falun Gong.

Carson says he dropped into a double lotus position, but he didn’t have to wait long for police to respond.

“We sat there for a couple of seconds, and then police vans started surrounding us,” he explains. “[The police] started to pull us into the vans, and that’s when they started beating people. . . . Some girls from Australia were holding up a banner, and they kicked one girl to the ground and started dragging her by her hair.”

Carson was not injured.

A nearby cameraman running a live video feed sent footage of the protest to Europe, and the demonstration was soon major news around the world. “Ten minutes after it happened, it was already on television,” Carson says.

China outlawed Falun Gong as an “evil cult” back in 1999. Since then, tens of thousands of adherents have been sent to prisons and mental hospitals. About 300 have died in custody, according to Falun Gong spokespersons.

Carson and his companions fared much better by comparison. Police took their passports and questioned them. The protesters were held in police custody for more than 30 hours, given a warning for disrupting public order, and then deported. “They brought us to the airport and forced us onto a flight to Vancouver,” Carson explains.

Demonstrations by foreigners are rare in China, which has one of the worst human rights reputations in the world. But Carson, who began practicing Falun Gong a year and a half ago, says his faith kept him from feeling too much fear.

“My purpose wasn’t to go there and get beat, to be a martyr,” Carson says. “My purpose was to tell the police what’s going on. Most of these guys don’t know people are being sent to psychiatric hospitals or crazy work camps. . . . They don’t know that 80-year-old women get beaten to death.

“We were aware of the possible danger,” he continues. “But when I see injustice, when I know good people are dying for someone else’s political gain, I feel like I have to do everything I can to try to stop that. And this was one thing I could do.”

Given the ongoing violence in the Middle East and the climate of fear here in the United States, can Jews and Muslims have a constructive dialogue? We’ll find out on Monday, Dec. 3, when the Jewish Community Agency of Sonoma County holds “Children of Abraham,” a discussion between Rabbi Alan Lew, the spiritual leader of Congregation Beth Shalom in San Francisco, and Iftekhar Hai, director of the United Muslims of America. The event begins at 7:30 p.m. at Sonoma State University’s Cooperage Building, 1801 E. Cotati Ave., Rohnert Park. For details, call 707/526-5538.