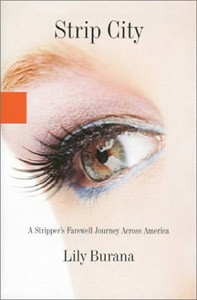 An exotic dancer takes a farewell tour in ‘Strip City’

According to Lily Burana, strip bars are all about creating permissive space, “a place where I can wear spandex with impunity,” as the stripper-princess explained at a recent reading of her new memoir. “Connection without consequence.”

But Burana saves herself from domesticity by inventing an impediment: before planning the wedding, she’ll tour the country alone, working as a stripper in as many bars as possible, dedicating herself to soliciting the male gaze and revisiting the wildness of an unexamined youth. A final fling on the strip circuit is necessary to Burana’s pursuit of self-knowledge–at least, that’s what she tells readers and the cowboy prince who waits patiently back home.

The difference between pursuit and flight, seeking and escaping, is negligible. Either way, the outside appearance is the same: constant motion, autonomy, intuition, and indulgence. Both justify a road trip in service of highly personal goals.

To her credit, Burana states those goals up front: “I want to fall in love, but I don’t want my life to be subsumed. My independence is the key to my sanity. . . . I’ve seen countless smart, inspired women slip under their mates’ feet . . . and I’m scared of that happening to me.”

Taking a cue from Mae West–her precursor in the brainiac-tart trade–Burana is respectful of marriage as an institution, but she’s not necessarily ready to be institutionalized. The real story here becomes an inverted fairy tale, gracefully shedding the presumption that every woman out of high school is tired of traversing the world alone.

As she considers marriage, Burana optimistically writes, “I almost had to fetishize home life, approaching it as either a weird experiment or a role-playing game. . . . But inside the irony. . .is a little silvery burble of joy at the realization that I can be fully adult and still be me. I’m learning that what seemed like an ongoing struggle between freedom and domesticity was really just a style conflict, and I’m better off having a solid home base than living untethered and spastic in the vain pursuit of edge.”

The book considers that solid home base only briefly, mostly drawing on Burana’s untethered movements. It’s a roving, intellectual bachelorette party, a good time sprinkled with a few weary days, a glimpse of possible “stripper damage,” the psychological toll of the pursuits. It’s also a broad look at all the men Burana could be engaged to, but isn’t, from Alaska to Texas, Florida to California.

Stripping as we know it today is heir to the burlesque tradition. The original burlesque performances were brought to Puritan America by a troupe of English women in the 1800s who worked with an all-female cast and crew. The burlesque stage thrived on bawdy bedroom tales; women scandalized puritanical crowds by making light of marriage, sex, fidelity, and venereal disease.

Then, in the 1900s, burlesque degenerated into striptease–titillation without social commentary. The dancer was relegated to muse rather than artist. With Strip City, Burana bridges the gap between dancer as muse, or object, and burlesque performer as outspoken social critic.

She writes: “The real scandal in my working as a stripper is that I can’t dance. . . . When I was in grade school, I took an afterschool course that offered instruction in all the dance steps from the movie Grease, and I struggled in vain to learn a basic cha-cha.” The exotic dancer becomes as lovely and nonexotic as the girl next door.

Now Burana has moved from stripping tour to book tour. The cowboy and the wedding, she tells her crowd–that resolution of happily ever after–is called off.