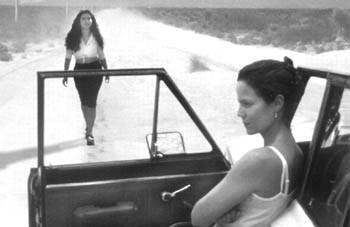 ‘Without a Trace’ is an enchanting but tough road movie

Many critics who have seen Sin Dejar Huella (Without a Trace) compare it to Thelma and Louise. But the comparison is unfair: director Maria Novaro has delivered a much better movie than Thelma and Louise, that supposed feminist classic, with its shaky sense of working-class life, its slumming big-name actresses, and its finale dripping with old-school masochism.

Without a Trace is an adventure tracing the length of Mexico, but it’s also an engaging, joking film about the prevailing conditions there. Maybe it’s not as tormented as the social-realist films you expect to cross the border, but neither is it blind to the plight of Mexico.

There are two heroines. One is a Juarez single mom, fleeing life on the border. Aurelia (Tiare Scanda), a friendly but tough girl with a taste for beer, is moving to Cancún. She’s leaving behind a no-good boyfriend in the drug trade, work in the maquiladora factories, and the still-uncaught serial killer suspected of the deaths of countless local women.

At a roadside diner, Aurelia picks up a woman bumming a ride. Traveling under the name Ana (Aitana Sanchez-Gijon), she’s a fancy, Spain-educated woman with a Castilian accent. The two head south, keeping their secrets.

Aurelia doesn’t mention that she’s lifted her boyfriend’s stash of drugs and money to help pay for the relocation. Ana is also being dogged. A federale named Mendizabal has trumped up charges against her for selling fake pre-Columbian artifacts to Yanqui museums.

Jesus Ochoa, who reaches Wayne Newton levels of ickiness, plays the cop. He wears snakeskin boots and boot-shaped sideburns; he has a bulging belly that he likes to enhance with a big silver belt buckle, skin-tight cowboy shirts, and, of course, bribes.

As the two women and their pursuers head for the resorts, the Caribbean coast is photographed in luscious wide-screen 35 mm. The coast is paradise, yes, but it’s always seen warts and all, with small-town garages, muddy streets, boisterous stray-dog packs, pro-Zapatista graffiti, and the petrochemical plant here and there.

The soundtrack music builds the atmosphere: defiant ranchero protest songs in the north, plaintive Vera Cruz harps in the interior, and Yucatán string bands when the women arrive in the tropical south.

Director Novaro, who also did the dance-hall romance picture Danzon, slows down the film when the women arrive on an antique plantation that’s been recycled into a hammock-hotel. The movie stalls there. Novaro refuses to provide a time line for the adventure–the running gag is that she cuts away whenever we’re supposed to find out the date.

Maybe objecting to the slow pace in this plantation segment is like being a North American fretting about schedules when south of the border. Without a Trace lingers because it’s passionate about the road south: the people, the land, and the public art. Indeed, the film is practically a companion piece to Helen Escobar’s diverting picture book, Mexican Monuments: Strange Encounters. Like Escobar, Novaro is very fond of Mexico’s unique public statuary.

Note that the adventure turns briefly bloody, but never sadistic. The blood is used as an object lesson. Women like Aurelia may never spill blood, but they have to clean up a lot of it.

Without a Trace is at the Rafael Film Center only for a week, unfortunately. Sanchez-Gijon’s “cute little bandit face” (as Mendizabal says)–not to mention what an old-time advertising hack might call Tiare Scanda’s “scanda-lous” body–should have been enough to get distribution for Without a Trace. And the studios are angling for a Latin audience, too–they’re quite pious on that count. Yet Without a Trace didn’t get a distributor–and look, in the name of God and Griffith, at what does!