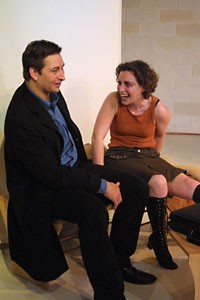 Deception is the rule as lovers get ‘Closer’ at AT

Looking for a holiday heart warmer about life, love, and the tender joys of emotional intimacy? Want something that will inspire you to pull your significant other under the mistletoe for a big, wet kiss?

“Kind is dull. Kind will kill you,” one character tells another, and then goes on to prove that cruelty can also be pretty lethal.

Now on stage in an Actors Theatre production directed by Argo Thompson, Patrick Marber’s Closer is a play about relationships that could put the most starry-eyed romantic off the sweet stuff for good.

With only four characters–two men, two women–you’d think there would be some limit to the amount of lying, cheating, and general bad behavior that could go on.

And yet, this is not a simple sex comedy or a soap opera. We’re not at Melrose Place or on Temptation Island. In Closer, relationships do matter. They just don’t work. Ever.

“I know what men want,” explains Alice (the charmingly energetic Danielle Levin), a stripper with a big secret who, as another character says, possesses the “moronic beauty of youth.”

Turns out men want an impossible bundle of contradictions, a woman who doesn’t and can’t exist, an ideal–any ideal, almost–rather than quotidian reality. And women aren’t far behind in the delusion department.

The play opens with Alice artfully seducing the older Dan (J. Eric Cook) even as he describes his dead-end job as an obituary writer. Dan’s work consists of whitewashing the lives of his deceased subjects: “He valued his privacy” means the dead man was gay, “He enjoyed his privacy” means he was a flaming queen, and so on.

That theme continues: Gay or straight, deception seems to be an integral, inextricable part of romance and sex. “What’s so great about the truth?” Dan exclaims. “Try lying for a change. It’s the currency of the world.”

Not that any of these characters really need to be urged to deception as they couple, uncouple, and couple again in a new combination. And when honesty does rear its head, it wrecks relationships; as we learn from the play’s other couple.

A working-class bloke turned wealthy dermatologist named Larry (Dodds Delzell) discovers that his wife, an American photographer named Anna (Beverly Bartels), is having an affair. “Thank you for your honesty,” Larry says. “Now fuck off and die, you fucked-up slag.”

If your raunch alarm is going off, then be warned: Closer gets much rougher than that in both word and deed. Indeed, cruel jibes and some (pretty funny) sexual humor are the order of the day (“You’re a man,” Anna says. “You’d come if the tooth fairy winked at you”).

And yet, the audience has to care about these characters for their self-inflicted predicaments–packed with ironies and hypocrisies–to be poignant as well as humorous. It’s fortunate, then, that the excellent cast of this AT production manages to find the heart in Marber’s play.

Beverly Bartels is good at being bad at lying, and J. Eric Cook manages just the right combination of ferocity and plaintiveness as he moves from deceiver to deceived and back again. Dodds Delzell is especially good as the up-and-coming doctor with a taste for strippers and prostitutes. Delzell’s expressive face conveys more with a twitch of the eyebrow than some actors can communicate with their whole bodies.

Closer will appeal to anyone looking for some hard truths about romantic relationships. But leave the mistletoe at home–around this play, it’s a loaded weapon.