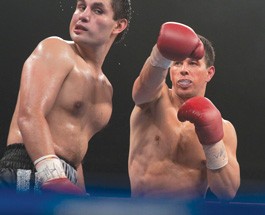 'The Fighter' a brilliant working-class ode

Prestige-film season is the graveyard of the good, solid three-star movie. That makes chances for acclaim tougher for The Fighter, with its title so similar to The Wrestler. David O. Russell’s account of pugilists Micky Ward and Dicky Eklund is more than worthwhile, though. It’s juicy, touchingly acted and rich with atmosphere.

The story takes place in the 1990s, in Kerouac’s hometown of Lowell, Mass. As always, serious location work reduces the need for a lot of explanatory dialogue. The Fighter begins with a parade of sorts; followed by cameras, the two boxers go for a walk through the town, shaking hands and high-fiving the passersby. One disgruntled local tosses a cup of water at them from his second-story window, and with that, the film slips into a groove of believability.

Road-crew laborer and striving boxer Micky Ward (Mark Wahlberg) has been training all his life with his elder half-sibling, Dicky Eklund (Christian Bale). Early on, we see the two together on a couch, talking to the camera in what seems to be a documentary about the brothers’ comeback. Dicky’s great claim to fame is knocking out Sugar Ray Leonard (the smooth Leonard plays himself in a cameo), and he’s ready to remind any listener of that bout.

Micky is in a career lull as a “stepping-stone” fighter, used as a boxer for other boxers to leapfrog over. He’s divorced with a kid; his ex-wife, still hostile, has a restraining order against him. One evening, Micky meets a weary bartender, Charlene (Amy Adams), a University of Rhode Island dropout with aspirations for a better life.

Charlene is tough enough to fight off Ward’s overprotective family, a gaggle of seven high-haired, sharp-nailed sisters who look like they could take down a heavyweight or two themselves. The mom of this scary brood is the chain-smoking Alice (Melissa Leo in another fine, sandpapery performance); all put pressure on Micky to keep Dicky as his trainer. There’s just one little problem with the elder half-brother’s work: he’s a hopeless crack addict.

Wahlberg, born 34 miles away from Lowell and also from a family of nine, couldn’t have been better cast. Bale has to jump around; this is not his milieu, or his accent, and his acting is a bit more flamboyant. Not to say that Bale’s Dicky isn’t invigorating to watch in spots, but when people say a train wreck is fascinating, they usually mean that part right before the train collides. Bale is a smoking, ruined locomotive from the get-go.

Russell handles Dicky’s turning point, his recovery, with an interestingly antique method: double-exposure-like images of his bout with Leonard flicker above his bed as he sweats out the crack cocaine. There are only so many ways to shoot a boxing movie, let alone a boxing scene. Russell avoids Raging Bull&–isms by filming straightforwardly, like a documentary cameraman, showing us the science of prizefighting—the dodging and dancing more than the slamming fists.

Inevitably, there is that visual necessity: the slow-mo, sweat-splashing punch to the jaw, a shot recently derided in Jackass 3D as “the Rocky.” As usual in a boxer’s biopic, the height of the arm’s arc, the narrowness of the victories and even the size of the opponents are exaggerated. (It’s already notorious on the internet that Mike Mungin had fewer than 10 pounds on Ward, not 20 as it’s stated here.) Yet the pleasures of The Fighter come in its well-done performances and well-filled-in backgrounds. If the facts are slightly fast and loose, so, blessedly, is Russell’s direction.