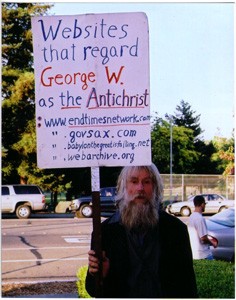 ‘End Times’
Craig Davis, who works as a Buckelew Programs’ independent-living-skills counselor helping the disabled homeless transition to housing, took this photo of an unidentified man while waiting in line to see ‘Fahrenheit 9/11′ at the Rialto Lakeside Cinemas. The man, evidently rallying a cause close to theatergoers’ hearts, only allowed Davis to take the shot after ascertaining that Davis wasn’t from Homeland Security.

This was an experiment well worth trying! We set out a call to non-professional photographers some weeks ago, asking you to submit images that you felt best described the North Bay. Almost 100 of you responded, including eight-year-old Vaughn R. Higgenbotham, whose appreciation of garbage cans and warning signs has ensured that we¹ll never look at those objects the same way again.

Remember, we cautioned, “gorgeous” isn’t the same thing as “beautiful.” We weren’t asking for pretty pictures, though we certainly received many, some of which you’ll see on the following pages. Rather, we were looking for the disparate eyes of the North Bay to help us record a short, living, snapshot of the area we share.

It appears that a new tradition has been founded! We hope that you enjoy this refection of our good fortune in inhabiting such a profoundly vibrant area with such a diversity of peoples. But most of all–we wish each and every one of us peace, joy, good health and great love as we journey together ’round the sun toward another New Year.

Former Hidden Valley School principal Mike McGuire took this shot east of Glen Ellen on Highway 12 just this fall. When we contacted him, we were told that McGuire, who recently retired, was ‘in a meeting.’ In fact, he was taking a piano lesson. To the good life!

And the Livin’ Is Easy
Sandra Stark’s ‘Summer Porch on the Russian River in Guerneville’ captures that lazy yellow liquid of a summer 4pm so well.

‘Greetings From the Edge’
Tim Hollingshead and his wife, Judy, moved up to the town of Mendocino a few years ago. Tim, a retired power-generation specialist (‘I used to make electricity,’ he explains enigmatically), sent this image out to friends as a procrastinator’s Chinese New Year greeting. ‘I wanted people to see that we’re living on the edge of the world now,’ he explains.

‘Silverado’
Ann Trinca, gallery manager for the Di Rosa Preserve and editor of the zine ‘Pearl Necklace,’ took this shot of an abandoned Napa chicken shack right behind her apartment with a Holga camera she got for Christmas. ‘It’s a really cheap German camera,’ she explains , ‘known for making odd effects because it’s plastic.’ Trinca is intrigued by the ‘forgotten’ places that Napa still harbors.

‘Tafoni #2 Salt Pt.’
Finishing up her MFCC license, Petaluma resident Mari Stefonetti is particularly interested in the form, texture and color of the soft coastal rock in Sonoma County’s northern reaches. ‘I look at it as another world,’ Stefonetti says. ‘The stone formations remind me of ruins.’

Bullet-Poofed Glass
Cloverdale court reporter Tina Hannon visited Alcatraz for the first time as part of a family reunion trip in 2002. There, she found this window with a full-barreled view.

‘Sonoma Creek, Sugarloaf Ridge’
Philip Copenhaver, who describes himself as ‘old enough to know better,’ is back in school to become a construction manager, supporting himself by working part-time at the Shutterbug camera store. He hopes to make photography a fiscal part of his life, but in the meantime is content to explore all the ‘wild places’ in the North Bay within 30 minutes of civilization.

‘New Year’s Day, 2004’
Cotati contractor Nik Catalina took this shot last Jan. 1 of the eastern hills near where the Crane Canyon and Bennett Valley roads run away from Cotati.