.Blue in the Face 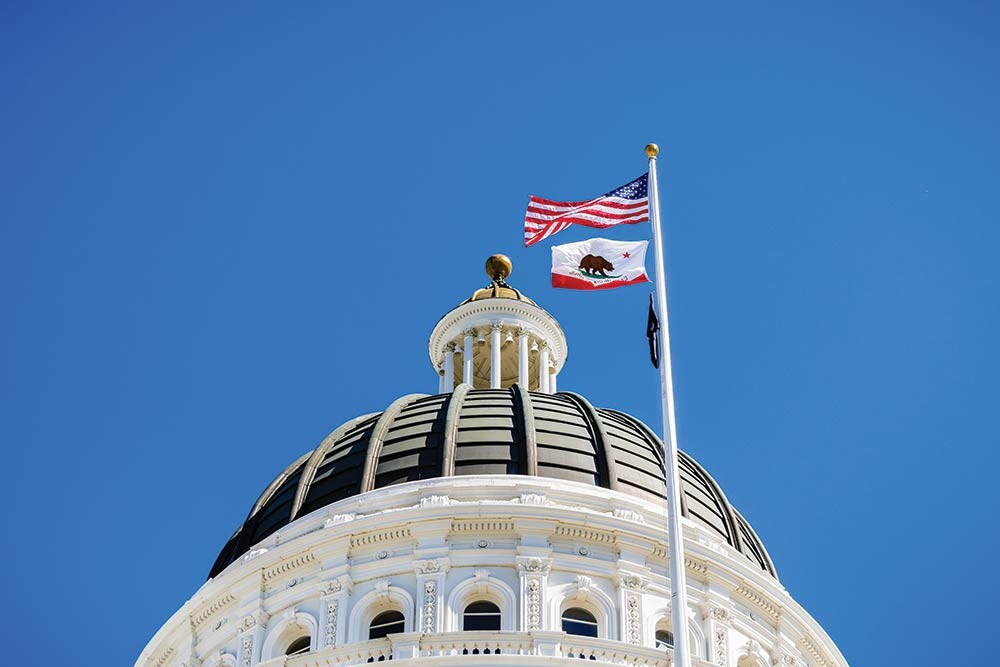 A House Divided? The state party is rudderless, says one progressive critic—even as it is all-powerful in Sacramento

If the past several years are any indication, sparks will fly at the California Democratic Party convention this weekend in San Francisco.

Attendees of the gathering of Democrats—second in size only to the national convention—will bump shoulders with 14 announced presidential candidates, elect a new chair for the state party and vote on a variety of resolutions from Democratic clubs around the state.

But, as 2020 approaches with 24 candidates vying for the party’s presidential nomination, the larger debate over the direction of the Democratic Party is pungently acute in the North Bay, where even a pro-impeachment liberal environmentalist like Jared Huffman is viewed by some progressive party activists as a corporate Democrat, Joe Biden is accused of being a Republican and Bernie bumper stickers are as common on the road as traffic jams.

Conventions are always wide open and messy affairs, since the many factions of the party are all under one roof. But given the “Trumpian” fallout from the departure of accused serial groper and former Chair of the California Democratic Party Eric Bauman late last year—this year could be a doozy.

Recent state conventions have highlighted the moderate-progressive divide in the Democratic Party across the country—even as the state is basically a one-party state with a supermajority in Sacramento that’s gaining steam under Gavin Newsom. Still, the party will now have to deal with an additional layer of divide as a handful of the candidates for party chair are explicitly running as a rebuke against Bauman.

At the 2017 state convention, Bauman narrowly won election as party chair over his African-American opponent, Kimberly Ellis. She’s running against six other candidates this year. Most of them highlight their activist-progressive bona fides in campaign literature and pledge to move the party beyond the Bauman stain. In November 2018, Bauman stepped down as chair after party employees and activists accused him of sexual harassment for inappropriate comments and physical contact with staffers.

If no candidate wins 50 percent of the vote on Saturday, a second vote will be held on Sunday morning to pick a party chair.

“The priority of this convention is the election of a state chair,” says Pat Sabo, the chair of the Sonoma County Democratic Central Committee. “That will give us a better idea of where the party is going into the [convention].”

In March, former vice president Joe Biden bragged that he had “the most progressive record of any candidate running” for president. The line irked members of the “Sanders wing” of the party, who don’t consider Biden one of their own. Then again, Sanders isn’t even a Democrat. Marin County progressive activist and author Normon Solomon penned a column that month that said Biden “might as well be a Republican.”

While it’s true that all politics is local—locally, Democrats really don’t like President Trump and want their elected officials to do something about it. Sonoma County’s Alice Chan, an elected Democratic Party delegate from Assembly District 10, said whether or not to impeach the president has been an increasingly divisive issue in the party in recent months.

Climate change is another issue of great interest to local Democrats, who give no eco-quarter when it comes to Huffman. At the local level, Chan disagreed with Huffman’s decision to join House Speaker Nancy Pelosi’s House Select Committee on the Climate Crisis, but likes that he’s gone after Trump via impeachment.

“[Pelosi] hamstrung the committee by depriving it of the powers routinely given to congressional committees: the power to issue subpoenas and write legislation,” Chan wrote in an op-ed in the Bohemian earlier this year.

“If we are truly facing “the greatest moral, economic and environmental imperative of our time”—and we certainly are—why hasn’t Huffman spoken up about the powerlessness of this committee?” Chan continued. For that matter, why hasn’t centrist Democrat Mike Thompson?

Chan says she’s proud that Huffman had recently publicly disagreed with Pelosi’s opposition to efforts to impeach Trump. Huffman is one of about a dozen congressmen supporting impeachment proceedings against the president. Thompson is not one of them.

As the party’s been working to overcome the Bauman debacle, Sabo continues to believe that most disagreements within the party are over how to achieve goals shared among all Democrats.

“We have more in common than we think, but we might want to get there differently,” she says.

Recent skirmishes over universal healthcare, a policy included on the California Democratic Party platform, are an example of one divide within the party, with progressives criticizing elected officials over a lack of progress toward what’s presumed to be a shared goal on the state Democratic platform.

The Democrats currently hold all eight statewide executive offices along with a supermajority in the legislature. It’s not like they can blame Republicans for standing in their way.

In June 2017, Assembly Speaker Anthony Rendon pulled the Healthy California Act, a proposed universal healthcare bill, from consideration, arguing that it was “woefully incomplete upon reaching the Assembly for a vote. His decision sparked protests from the bill’s backers, which included the California Nurses Association.

Several months later, progressive Democrats in Humboldt County passed a motion by 16-11 that blasted Assemblyman Jim Wood for his role in the bill’s failure, and for “ignoring the clear will of the Democratic Party.”

Wood responded that he was not working in opposition to the bill, but that more groundwork needed to be done “to make the goals of this bill a reality.” Another attempt at universal healthcare was considered and shelved this year. Wood told reporters that it was still premature to push for a California single-payer universal healthcare system.

Attempts to guide the state Democratic party from the inside often come down to invoking over the party’s lesser-known rules and procedures. This fact came to a head in the North Bay at several public, but little-advertised elections, for state party delegates last year.

There are three ways one can serve as one of the roughly 3,000 delegates sent to the Democratic National Convention: serve as a member of a county central committee; be appointed by a state-level elected official; or win a seat in open, but little-advertised elections in each assembly district every other year.

The open elections, known as Assembly District Election Meetings (ADEM) have historically been viewed as one way for everyday Democrats to gain votes at the state convention without much investment beyond campaigning for the seat locally. That dynamic shifted somewhat this year when elected officials started to endorse slates of delegate candidates.

For example, in District 2, a sprawling district that stretches from Marin County to the Oregon border, Wood and Sen. Mike McGuire endorsed the California Rise Together slate. The slate included elected office holders and party members predominantly from Sonoma County. An opposing slate, the Progressive Labor Slate, fielded candidates from up and down the North Coast.

The decision by the elected officials to endorse candidates in the open election—a new practice, according to multiple local party members interviewed—struck some progressives as an effort by elected leaders to win sympathetic delegates in a category usually not controlled by them.

“If they wanted to serve as a delegate, they could have just asked their assemblymember for an appointment,” says Chan.

“Assembly members are members of the Democratic Party and they are allowed by the party bylaws to participate in the ADEM elections in the same manner as any other engaged and committed registered Democrat,” Wong wrote.

The state party’s bylaws don’t weigh in on the role of money in the ADEM elections. While candidates for public office are required to report financial contributions and expenses of their campaigns, the party isn’t beholden to those campaign-finance rules. The California Democratic Party didn’t respond to an inquiry about rules regarding financial disclosures in the district elections in time for the Bohemian’s deadline.

Sabo, the chair of the county central committee, called the practice of putting money behind slates “a slippery slope.”

“I think that money could have been better spent in [Sonoma County] rather than attacking each other,” Sabo said.

Despite the prominence of the electeds-endorsed slate members, the Progressive slate won 12 of 14 seats in the recent elections. How that translates this weekend remains to be seen, but local party officials are optimistic that, if nothing else, the party convention presents a chance for the state party to move beyond the Bauman debacle.

Mary Watts, a Rise Together candidate from Santa Rosa, was elected to serve on the state party’s executive board as representative for District 2. She ran for Santa Rosa City Council last year as a working parent and renter in one of the nation’s priciest markets—and lost.

Watts said she hopes that a new party chair can help mend some of the party’s culture revealed, in part, by the unhealthy culture under Bauman’s leadership.

“We need to acknowledge that we have had faults and that we want to make changes,” she says.

Rather than categorize party members as “progressive” or “moderate,” Watts says she tends to consider a party members’ stance on different issues.

“The bigger issue is that everyone can go into a room and focus on common goals,” says Watts. All eyes are on 2020 and she hopes the state party can help lead the national party to take back the White House and the U.S. Senate in 2020.

David Hildebrand, a candidate for northern chair of the Progressive Caucus, who got involved in electoral politics as a result of the Sanders campaign, believes the state party is not acting quickly enough on major issues such as climate change and universal healthcare. He decided that pushing the state party to the left from the inside would be quicker than building a viable third party in time for 2020. He’s hoping for a positive result this weekend.

“This election is going to be a bellwether for the direction the party is moving,” Hildebrand predicted. “The person in charge of the party has to be that speaker pushing the issues and the platform In the past the [moderate] chairs have not done that because they don’t need to.”

Helen Sizemore, an elected delegate in Assembly District 2 hopes that a new chair will provide unifying leadership for a state party that Sizemore sees as adrift—yet seemingly all-powerful at once.

“I think the party is a ship without a rudder,” says Sizemore. The election, she hopes, will start to set state Democrats on a new course.