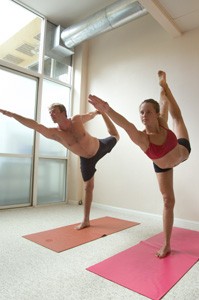 Frankly, the problem with Bikram yoga is that it just hasn’t been marketed right. Seriously–Bikram yoga? Who the hell’s Bikram? Oh yeah, Bikram Choudhury. Isn’t he the Bentley-driving, Beverly Hills villa-owning dude who sued people for copying his idea to do yoga in a hot room? Granted, he was dealing with people who were using his name and an identical series of identical poses at identical temperatures in an identically configured room, but still . . . lawsuits? Not very yogilike.

Many people don’t know this, but Bikram yoga is actually the black sheep of yoga practices. Whenever I find myself sipping chai and chatting with a group of yogis, as soon as I confess my love for Bikram, the conversation pauses, as if I’ve just told a group of Christians that, funnily enough, Satanism has me feeling better than I’ve felt in years.

Not that Bikram yoga has anything to do with Satanism, but the classes are pretty much hot as hell. While you stretch and compress your way through twin sets of 26 poses in 90 minutes, the room cooks at about 105 to 110 degrees, with humidity at about 40 percent. Enthusiasts claim that the various poses, combined with the heat, improve flexibility; enhance concentration; reduce fat pockets under the buttocks; correct posture; stimulate proper functioning of the pancreas, kidneys and liver; normalize hydrochloric acid levels in the stomach; help conditions of constipation, diabetes, colitis, low blood pressure, gout, appendicitis, spondylitis and menstrual disorders; and of course unify mind and body.

I am a borderline case) doesn’t really help, because hippies have been touting the cure-all potential of yoga since the ’60s, and all I got was this lousy tie-dyed T-shirt.

Incredible Bendable: Bikram practitioners reach for the stars with everything they’ve got.

With proper marketing, Bikram yoga could be perceived as totally badass. Choudhury and his wife were both yoga champions in India, and while I have no idea what that means exactly (perhaps their breathing was way calmer than everyone else’s?), the champion factor could be played up. They could travel around the country hosting impromptu “yoga-offs” in their heated van, schooling cocky upstarts with the most amazing Dandayamana Bibhaktapada Paschimottanasana poses you’ve ever seen, representin’ I-N-D-I-A to the fullest.

At schools they visit, the couple could wear cool yoga superhero costumes, create a spinoff Yoga Power cartoon and engineer a cross-promotional tie-in with health-food stores (think Happy Meals with tempeh instead of beef) that would totally entice the next generation of yogis into the sweaty fold.

And it seems the Happy Meal metaphor isn’t far off. The Economist magazine recently wrote that “Bikram Choudhury is trying to do to yoga what McDonald’s did to food,” by normalizing and franchising his particular brand of yoga. He requires certified Bikram instructors to train with him at Bikram’s Yoga College of India (which was founded in 1974 and which is curiously located in Los Angeles), set up their studios in a similar manner and use preapproved scripts in class.

Some kickboxing loyalists I know shun yoga because they think it’s boring. And when people who enjoy boxing without an opponent think something’s boring, they’re probably right.

Except that in this case, they’re wrong. Bikram yoga may or may not unify mind and body, but it’s definitely a vigorous workout that even grunting, pumped-up gymboes could love. By the time I flopped on to my back after my first Ustrasana, or Camel pose, my body felt like it was melting into the floor while my heart tried its hardest to beat its way out of my chest. As I headed out to the car afterward, I felt like what drug users might call “high as a kite,” and what non-drug users might call “probably something like being high as a kite.”

As the intense effects wore off, I felt giddy and caffeinated. Consistent practice dissolved desk-job-related back and neck tweakage, as well as 10 extra pounds around the gut and ass regions. If I had a cool spandex yoga superhero outfit, I would have looked way better in it after a month of Bikram yoga. Not that it’s all fun and games. Some of the poses feel like they were stolen straight from the pages of The Complete Idiot’s Guide to Self-Inflicted Torture. Being somewhat sweat-prone by nature, I’m usually soaked by the second pose. Round about pose seven, Tuladandasana, or Balancing Stick, you can actually hear the sound of sweat sprinkling my sodden towel. Perspiring so profusely can be embarrassing when the people around me are twice as deep into the pose and hardly breaking a sweat. Or worse yet, they’re not sweating at all; they are serenely, effortlessly glistening.

But oftentimes, the people around me are dripping just as much as I am, our combined sweat tapping out the sound of human rain. I sweat so much I have to actively hydrate before and after practice, or else I wake up the next morning feeling slightly hung over, with bleary, dried-out eyes and an insatiable thirst for Gatorade (who will hopefully–and generously–sponsor this sentence). Some doctors and yogis of a different, less xtreme ilk say the heat is bad for pregnant women and can lead to overstretching and clinical dehydration in the rest of us, criticism that only makes the sport seem more awesomely hardcore.

The only real bummer for me is that I have to schedule my meals around my yoga, because a Happy Meal in the gullet really gets in the way of a good stretch. I hope Bikram’s next step is to franchise a healthy fast-food chain. Only then will the masses, over the course of a hurried lunch break, finally be able to unify mind, body and gullet.

Is it possible that there is no Bikram-certified hot spot in either Marin or Napa counties? We could barely find the one. Ah well, no sweat. Here are a handful in Sonoma County for those perspiring for more: