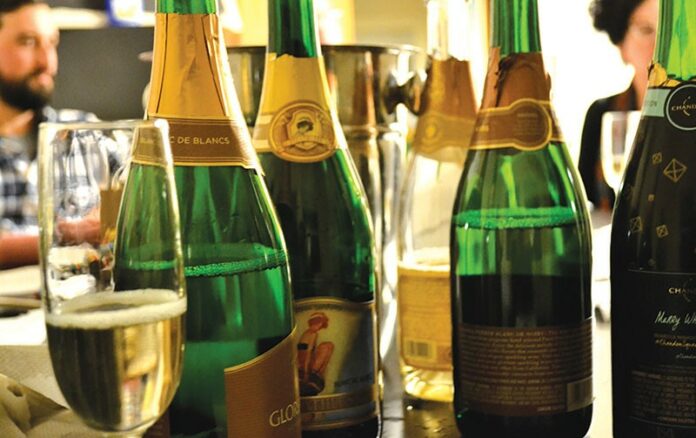 Toasting the top sparkling wines of 2016

Anyone who can’t get enough of the pop and whoosh sound of sparkling wine (what we call domestic wines made in the Champagne style) being opened should arrange for a tour of a sparkling bottling line. Bam! bam! bam! go the bottles, as a machine cracks steel caps off them one after the other. Splat! splat! splat! go the plugs of yeast against the Plexiglas enclosure. Yesteryear’s yeast, having worked hard and seen better days, then fallen into slumber in a comfortable curve in the bottle, is ejected by roiling pressure built up over time.

Next, that old yeast is replaced with a small dose of reserve wine and sugar. In brut sparkling wine, it’s just enough to balance the high acidity and effervescence of the sparkling wine, and should taste sweet. Now topped with a proper cork, cage and fancy hat of foil, the sparkling wine is crystal clear, haunted only by the essence of yeast in its characteristic aroma, transforming mere fresh fruit and fizz into something worth contemplating and celebrating.

The theme for this year’s Bohemian holiday sparkling wine roundup was simple: to find the favorite, the best by consensus in a blind tasting (bottles were wrapped in foil—and yes, Stett, the foil was recycled) of the fizzy stuff, mostly from established local producers, and mostly easily found by last minute party-going shoppers on the shelves of better markets.

It was simple, until I mucked it up with a few more categories: “Fancy,” “Midnight Toasting,” “Brunch” and, even more confusing, “Friendly.”

Domaine Chandon Étoile Carneros Brut ($40) This otherwise steely and austere wine, flavored with the sharp fruit of apples marinated in lemon juice, also shows rich aromas of toasted almonds. A fine, balanced wine for toasting, I said, but on balance, Bohemians scored it tops, some of them finding the most evocative phrases to describe it: “the lover,” it’s an “up all night” wine that “would go well with eggs” in the morning. Take it under advisement. ★★★★

Iron Horse 2012 Ocean Reserve Green Valley of Russian River Valley Blanc de Blancs ($50) Tart, lean and salty, even before this wine’s oceanic ambitions were revealed, the Iron Horse Reserve smells only faintly of toast and buttery richness, like a shortbread cookie that’s just come home after years at sea. For each bottle purchased, Iron Horse gives $4 to National Geographic’s Ocean Initiative to protect marine areas—not a bad move if you want to continue pairing this fantastic fizz with seafood. Although only four tasters were still reporting at the end of the tasting, the lightweights having become distracted or bowed out, this serious sparkler enjoyed one of the best consensus approvals. Over several past vintages, this bottling has become my reliable favorite of Iron Horse’s offerings—make no mistake, it’s much more than just another bubbly with a charitable label. ★★★★½

Schramsberg 2012 North Coast Blanc de Noirs ($41) A five-star wine in my book, but not everybody agreed. Like toasty crust on a lemon cream pie, the aroma suggests sweet dessert, but fine carbonation and zippy acidity scours the palate, leaving a lingering notion of sparking apple cider—the non-alcoholic alternative to champagne kind—and baked golden apple. If you don’t already know about Schramsberg, it’s a very safe bet for a “fancy” bottle of North Coast sparkling wine that anyone will love. OK, not everyone. ★★★★

Breathless North Coast Blanc de Noirs ($30) Wood spice and clove on the nose, a pinch of yeast and a hint of wet plaster that reminds me of some single malts, with a barley-alcohol overtone to the melon rind and grapefruit juiciness. Toasting wine. ★★★½

Korbel California Brut ($13.99) Korbel does a fantastic job for the price. This is the kind of all-around pleasing sparkler that wine critics might describe as “surprisingly complex,” trying to walk back the high score they gave a domestic wine in a lineup of more expensive bottles. Lean, lemony and balanced with shouts out from yeast and lemon cream, this reliable sparkling wine should never be overlooked for its ubiquity. ★★★★

Iron Horse 2012 Classic Vintage Brut ($44) From estate vineyards in the cool Green Valley of Russian River Valley appellation, this fizz was slow to lose its sulfury aroma, ending up hinting at Tom and Jerry cocktail, with a tart, lychee fruit finish. ★★★★

Iron Horse 2012 Green Valley of Russian River Valley Brut X ($50) Steel biscuit: it’s not a band you might have seen at the Phoenix in the ’90s, it’s the aroma descriptor this slightly toasty but austere wine brings to my mind. And its juicy white grapefruit flavor brings brunch to mind. ★★★½

Gloria Ferrer 2007 Royal Cuvée Carneros Brut ($37) A fine, but not socks-knocking-off vintage of this extra-aged wine. The usual complement of shortbread
cookie, warm pillow and grilled sourdough inform the aroma,
while a light infusion of red berries, as in a sparkling water, and tangy citrus brighten up a teeny bit sweet finish. ★★★

Breathless North Coast Blanc de Blancs Brut ($29) Steely, with notes of apple and marshmallow, a lingering sweetness, scoury acidity and medium to large bubbles. Citrus and candied pineapple with a dusting of old yeast keeps it interesting. This was my favorite of a recent lineup of Breathless wines. Toast! ★★★★

Breathless North Coast Brut ($25) Everybody, including Robert Parker, has noted that this brut is almost a rosé, with its pinkish hue. A platinum-strawberry blonde, red fruited sparkler with tangy red fruit flavor, this earned the comments “baby shower wine,” “heartbreak” and “chick movie night” from some Bohemians. You get the idea—a fun, can’t-go-wrong bubbly. ★★★

THE BETTER WITH ORANGE JUICE MIXERS

Gloria Ferrer Carneros Blanc de Noirs ($22) Hard to say why this didn’t win more fans, with its initially complex, vintage aroma, but some thought it turned
quickly flat and sour, with a bitter aftertaste. ★★½

Domaine Chandon Rebecca Minkoff Limited Edition California Brut ($24) On the plus side, this could take the place of a budget Prosecco, but most tasters found this sulfurous wine, showing notes of sea foam, egg white and Sweetarts, to be superficially foamy but fall flat, without a lot of flavor payoff. The packaging conceit of these bottles, one in black, the other white, is a partnership with a designer of ladies’ handbags, whose apparently hotly coveted motif is essentially an “X” in a box. For some, this might be another plus; to others it may look phone-in and vapid. Try in bubbly-based cocktails. ★★½