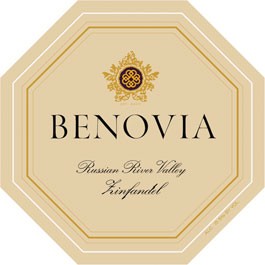 A brand-new winery that dates from the turn of the century still doesn’t sound right, does it? It’s not the fault of the winery; I blame the century. While sipping at the local whiskey bar, I met some folks already intoxicated by just one beguiling glass of Benovia Zinfandel. Benovia—I could swear I’ve heard that name before. A few days later, hearing of my tasting plans, another acolyte exclaimed, “Ooh, have you had their Zinfandel?”

Just west of suburban Santa Rosa is an area of gently undulating hills in the middle of a valley. Surrounded first by an acre of neat gravel, then vineyards and finally ringed by coastal hills and the Mayacamas mountains is a big, brown barn. I swear I’ve seen this barn before. “DeLoach” pops in to my mind, as if whispered by an elf. Sure enough, our hostess says that the facility was originally built by DeLoach Winery before being sold to Joe Anderson and Mary Dewane. The story so far: these Arizonans found themselves keen on winemaking after profitable careers in the healthcare sector, partnering with winemaker Mike Sullivan to found Benovia in 2005.

Before imbibing, we take a looksee at the estate’s Martaella Vineyard, which includes a recent addition that I also swear I’ve seen before. Rows spaced just four feet apart, enough steel to build a Liberty Ship—it’s déjà vu all over again. Yes, confirms our guide, a certain renowned “Dr. Dirt” is assisting Benovia in its quest to grow even finer grapes to add to its already acclaimed portfolio of Chardonnay, Pinot Noir and Russian River Zinfandel, the classic Burgundian-Sonoma triumvirate. What, heard that one before? Sounds like our visit last week to Hartford Family Winery, winemaker Sullivan’s previous digs.

Tasting is in the barrel room, nothing fussy, although an outbuilding is slated for hospitality purposes in the future. The 2008 Sonoma Mountain Chardonnay ($32) had high-toned oak notes, cracker, warm buttered toast and a sweet viscosity, while the 2008 La Pommeraie Chardonnay ($48) seemed perfumed with Golden Delicious apple skin that upstaged the stave and the pat—lively and crisper on the finish. Dark in fruit aromas, the 2008 Sonoma Coast Pinot Noir ($45) rewarded the palate with fresh cherry; heady with bay leaf and anise, the 2007 Savoy Vineyard Pinot Noir ($55) plunged into darker flavors of plush plum and black cherry, with a long but puckery fruit-tannin finish. As for the much-lauded Zinfandel, it’s all sold-out, but still on the menu at Willi’s Wine Bar. I wish I could say that enjoying a bottle with Willi’s filet mignon sliders was all too familiar to me.