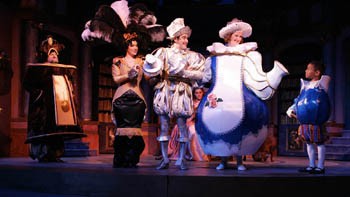 ‘Beauty and the Beast’

Santa Rosa’s Summer Repertory Theatre seems to have fallen under a magic spell.

With the opening of Walt Disney’s Beauty and the Beast, the first of five new productions in Summer Repertory Theatre’s 2005 season, the company’s creative team have assembled what is surely the finest-voiced SRT musical cast in recent memory. In the past, certain SRT musicals have suffered when lead parts were given to actors who weren’t necessarily born to sing. Not so with Beauty and the Beast. With a few minor exceptions, this is a full-throated cast, led by Jessica Crouch as Belle; C. J. Dion, a stage presence to burn as Belle’s crudely malevolent suitor Gaston; and a vocally magnificent Martin Giannini as the slender but soulful Beast.

Beauty and the Beast is a remarkably high-profile show, based as it is on a beloved animated classic that was itself based on a timeless fairy tale few can claim not to know. When Disney’s Oscar-nominated masterpiece was first taken to Broadway in 1994 as a full-scale musical, there were plenty of cynics (myself included) who assumed the show would be some cobbled-together Broadway version of a “Disney on Ice” spectacle, with gymnasts in theme-park costumes leaping about to a pre-recorded soundtrack. Boy, was I wrong!

The creative team that adapted Beauty from screen to stage maintained the clever, handcrafted charm of the original, tinkering with the story slightly so it makes sense with live actors, while piling on an appropriate amount of Broadway dazzle and flash. It has run on Broadway for 10 years and has played in every major theater city in the world, only now becoming available for college and semiprofessional companies. Summer Repertory Theatre, in fact, is the very first junior college program to ever be granted performance rights to the show.

Beauty and the Beast opens with two narrators giving the Beast’s backstory. A spoiled-rotten prince once insulted a prickly enchantress, who promptly turned him into a furry, fangy monster-man and all of his servants into household appliances. It’s a flashy, eye-popping start to a show that is packed with flashy, eye-popping effects: gorgeous scenery that often resembles the pen-and-ink drawings of an illustrated storybook; a trio of scary, spectral wolves with glowing eyes; and in the Beast’s enchanted castle, animated statues, feisty candle-holders shaped like human arms, a pair of acrobatic Oriental rugs, an impatient dinner table and a brilliant, walking, man-chair that itself received a round of applause when making its entrance on opening night.

Crouch, as Belle–a smart young woman condemned through an act of self-sacrifice to spend her life in the Beast’s domain–sings and plays all the right notes, convincingly moving from innocence to fear to anger to compassion to love. The various enchanted servant-objects are uniformly excellent, especially William McNeil, Matt Steiner, Deanna Cordano and Sarah Ragan, respectively, as Cogsworth the clock-butler, Lumierre the candlestick-chef, Mrs. Potts the teapot-housekeeper and Babette the feather-duster maid.

I could quibble with a few details, but beyond a few microphone issues that slightly marred the Beast’s big entrance and some sub-par trumpeting in an otherwise fine orchestra, I enjoyed the show so much I can no longer remember what most of my quibbles were.

Those familiar with the movie will surely recognize the songs: the smartly staged opening number, the French opera-inspired ensemble piece “Belle”; the splashy “Be Our Guest”; the optimistic “Something There”; and the sentimental ballad “Beauty and the Beast.” The stage version throws in several additional songs, the most noteworthy of which is the Beast’s achingly gorgeous lament “If I Can’t Love Her.” When Giannini sings this showstopper late in the second act, in an impressively full, rich and emotive pitch-perfect baritone, any concern that he is not physically intimidating enough to be a convincing monster suddenly melts away, and in that moment he fully becomes the Beast.

By then, this production of the famous fable has already proven itself to be one of the best shows to ever transform the stage of SRT. I intend to see it again later this summer. I only hope that, magically, there will be tickets left.