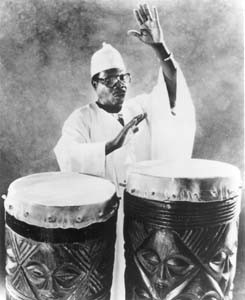 RHYTHM is the soul of life,” Babatunde Olatunji likes to remind those not in the know-zone. For his massive impact on the sound of music worldwide, this percussionist is widely recognized as the djahlibah of African percussion playing, the undisputed African drumming master. “Apart from the human voice, the drum is the next best instrument that, because of its evocative power, can bring more people together,” he says.

“It is a unifying force.”

Though jazz legend John Coltrane was his most noted student, the Nigerian’s admirers are legion, especially among musicians. Over the past 40 years, he has worked with a long list of improvisational music movers and shakers, including saxophonist Sonny Rollins, trumpet player Freddie Hubbard, drummer and bandleader Max Roach, and jazz flautist Yusef Lateef, among others.

But today, the irrepressible 71-year-old percussionist has other things on his mind. “I just got back from South Africa,” says Olatunji, his sonorous voice belying his enthusiasm, during a phone call from the Esalen Institute in Big Sur, where he teaches advanced drumming seminars. “I’m putting together something called Voices of Africa, which is a non-profit literacy project that can address this rampant problem of illiteracy.

“We cannot wait on the political leaders any longer to tackle this situation.”

On a continent where illiteracy can run as high as 85 percent, Olatunji has enlisted the help of a few friends to draw attention to this crisis. He recently met with newly repatriated South African singer Miriam Makeba, Afro-pop legend Manu Dbango, jazz and pop trumpeter Hugh Masakela, jazz pianist Abdulla Ibrahaim, and others, laying plans for corporate sponsorship of a world concert tour to raise millions of dollars over the next seven years in an effort to provide free education for every child in Africa.

“We’re going to make sure every child goes to school,” he says. “I’m tired of criticizing political leaders. Now it’s time to ask, What can we do for Africa?”

This isn’t the first time Olatunji has set out to conquer a formidable obstacle. In 1959, the then-unknown percussionist became the first African musician to hit the U.S. pop charts, all with a contagious blend of African beats and ostinato Yoruba chanting. His ebullient Drums of Passion (Columbia)–a milestone release on a par with Miles Davis’ Kind of Blue and Dave Brubeck’s Take Five–became a landmark, a percussion exploration unlike any American audiences had ever known. Here drums were liberated from their metronomic duty, music critic Mark Keating wrote last year, as servants to the melody. These drums were tonal, projecting harmony as well as rhythm.

“It’s a universal message–that’s what it is,” Olatunji says when asked to explain why Americans at the tail end of the Eisenhower era responded to his exotic sound. “I was able to bring it to them, but they were waiting for it–people were ripe for it. After all, Americans love to travel, and America being the kind of society that it is, everybody gets a chance to get listened to.

“If you have something worthwhile to say, it will be embraced–it will be welcomed.”

Olatunji got his 15 minutes of fame and used it for good purpose. He appeared on the Tonight Show and other TV programs, and used his earnings to fund a pivotal African cultural center in Harlem. In the process, Olatunji blazed a path for the world-beat explosion that followed; without Drums of Passion, there might never have been Paul Simon’s Graceland or David Byrne’s Rei Momo.

At a chance encounter at a Long Island high school with Olatunji–who after the success of Drums of Passion and a subsequent stint at the 1964-65 New York World’s Fair had begun lecturing at New York public schools–a then-teenage Mickey Hart, the Grateful Dead’s future percussionist, decided to become a drummer.

Hart later got a chance to return the favor. In 1985, Hart invited Olatunji–who had been without a record deal for 10 years–to sit in with the Grateful Dead at a New Year’s Eve show at the Oakland Coliseum. Hart later brought Olatunji into the studio to record with Carlos Santana, Airto Moreira, and others.

Olatunji later conceived of the Planet Drum tour in which Hart showcased many of the world’s top drumming masters, including Olatunji and Hamza El Din of Sudan. Olatunji also chalked up some impressive stage and screen credits, composing the score for Lorraine Hansberry’s A Raisin in the Sun and later collaborating on the soundtrack of Spike Lee’s She’s Gotta have It. More recently, Olatunji earned a Grammy Award nomination for last year’s Love Drum Talk (Chesky), a collection of drum-propelled love songs.

But it is onstage that Olatunji really shines. “That is the happiest moment of my life,” he says breathlessly. “Of everything I do, it is the most uplifting. I feel at home. I feel … accomplished. The joy, the happiness–I’m sharing the moment I’m onstage. I give all that I know, all that I can express. I am lifted far beyond what you can imagine.”