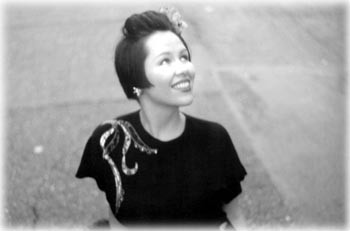 Red Hot: Lavay Smith cooks up a mess of fun with her Red Hot Skillet Lickers when they clean up the beach Sept. 6 at the Russian River Jazz Festival.

WITH A FULL SUMMER of fresh air out-and-abouting under the belt, coming to the indoor side of things is easy-peasy with such an array of intellectual and artistic spark in store. Below we offer our highly arbitrary guide for falling into the arts this autumn, from Labor Day to Thanksgiving.

Copperfield’s Fall Events
Political animals with half her exposure have been lost to the jaws of the jungle, but Angela Alioto keeps on swinging. Alioto reads from her new book Sept. 17 at the Petaluma store (140 Kentucky St.; 762-0563). Frances Mayes, the San Francisco State University writing professor and poet who has written an enchanting memoir about making a new home for herself in Italy, reads at the Montgomery Village store Sept. 30 ((2316 Montgomery Drive; 578-8938). On Oct. 7, in Sebastopol, poet Dana Gioia reads from his work and shares his thoughts on the role of poetry in our culture (138 N. Main St.; 823-2618). Sexpert Susie Bright makes an appearance in Montgomery Village Oct. 8 with Best American Erotica, the anthology series she has edited with great success for several years. Oct. 15 brings Lynn Freed to the same store, where she will read from her fictional memoir The Mirror, the tale of an independent woman emigrating to South Africa after the Great War.

Celebrate Rohnert Park
Past years have included bed races and the strangely named “Diaper Derby”–there’s truly nothing like undignified games to really bring a community together. This year Rohnert Park sticks with the basics: art shows, a parade, a community talent show, and live music, with performers including Phil’s Harmonic Orchestra, Blusion, Mark Mclay and the Dust Devils, and the Ken Winett Jazz Ensemble, Sept. 18-21. We can’t even keep track of all the good stuff, so call 522-9800.

Sebast O’pol
You should have learned by now to keep an eye out for this once-a-year spelling, which signals the approach of the locally famous Celtic Festival. Now in its third year, the Celtic Festival features three stages of music, along with workshops and dance, Sept. 19-20. Friday night features Martin Hayes, Dennis Cahill, and Andy Irvine; Saturday finds Alasdair Fraser and Skyedance headlining with Andy Stewart, Gerry O’Beirne, and others. Both events at Analy High School (6950 Analy Ave.). Saturday proper finds workshops, fiddling, Highland games, and such artists as the Old Blind Dogs, Croabh Rua, and Connie Dover, ongoing from 10 a.m. to 6 p.m. at the Sebastopol Community Center (390 Morris St.) Tickets are $5-$25. 829-7067 or 823-1511.

Art for Life
More than 200 works of art will be exhibited and, we hope, sold at the 10th annual art auction organized by Face to Face/ Sonoma County AIDS Network. Over the years, Art for Life events have raised nearly half a million dollars for Sonoma County AIDS services. The exhibit is free and open to the public Sept. 24-26; entry to the auction Saturday, Sept. 27, is $39 (the equivalent of three hours of in-home care). Friedman Center, 4676 Mayette Ave., Santa Rosa. 544-1581.

Carmen
It just ain’t an arts season without a glimpse at one of opera’s most compelling female characters. Thank goodness for Western Opera Theater, the touring company of the San Francisco Opera Center, which brings Bizet’s grand-scale, fully staged classic Carmen to the Main Theatre of the Luther Burbank Center Oct. 2. Supertitles in English will be projected above the stage for the French-impaired. Tickets are $20-$30. 546-3600.

Spreckels Center
The 1997-98 season opens Oct. 2 with the Pacific Alliance Stage Company’s Lend Me a Tenor, a romantic comic opera about the biggest night in the history of the Cleveland Grand Opera Company. On Oct. 25-26, the Rohnert Park Chamber Orchestra presents “Long Ago but Not Forgotten: Homages, Impressions, and Memories.” Bobby Hutcherson, who was awarded the title of “World’s Best Vibest” in the International Jazz Critics Poll, brings his marimba magic Nov. 1. The Festival of Harps returns Nov. 8, offering yet again a wide range of styles and music for devotees to revel in. Spreckels Performing Arts Center, 5409 Snyder Lane, Rohnert Park. Ticket prices vary. 584-1700 .

Comedy Competition
The annual San Francisco International Stand-Up Comedy Competition has a national reputation for revealing the foremost comedy starts of tomorrow, with Robin Williams, Ellen DeGeneres, and satirist Will Durst on the alumni list. The semi-finals are back in Santa Rosa this year on Oct. 3 at the Luther Burbank Center, 50 Mark West Springs Road. Tickets are $19.50-$22.50. 546-3600.

MOMIX
Combining dance with illusionary props and enigmatic lighting, the MOMIX group has danced its way into the cold, tiny hearts of critics over the last 15 years. The troupe springs the goods upon the Marin Center with its performance of “Baseball,” an elegaic tribute to this most American of sports Oct. 3. Avenue of the Flags, San Rafael. Tickets are $18-$28. 415/472-3500.

Sonoma County Harvest Fair
Abundance abounds at the annual celebration of the fruits of fall, held Oct. 3-5. For some, the highlight may be the opportunity to taste winning wines from a concourse of hundreds of local varietals. Others may find the World Championship Grape Stomp more to their liking. And don’t forget to line your stomach with winning entries in the professional and amateur food divisions. Sonoma County Fairgrounds, 1350 Bennett Valley Road, Santa Rosa. Admission is $2-$4. 545-4203.

Los Lobos
Rolling Stone calls them “America’s Greatest Band.” Decide for yourself at the upcoming Santa Rosa appearance of the funky, Tex-Mex rock band that has been steadily gaining fans for over two decades. Dancing is firmly encouraged at this gig. Jorge Santana opens the show Oct. 4. Luther Burbank Center, 50 Mark West Springs Road. Tickets are $22.50. 546-3600.

Santa Rosa Symphony
The West Coast premiere of “Shivaree,” by composer-in-residence Kenneth Frazelle, kicks off the 1997-98 season Oct. 11-13, along with variations and interludes by Dohnányi and Britten. Guest conductor and violinist Marin Alsop joins the symphony Nov. 22-24 for Dvorak’s “New World” Symphony and two jazz-infused works from David Balakrishnan and Paul Schoenfield. Tickets for single performances are $12-$30. 546-8742.

Arts and Lectures
Santa Rosa Junior College continues its fine series of free, noontime glimpses of intellectual well-being, bringing scholars from all walks to discuss their passions. Among the highlights are Elanle Moore’s lecture on “Aboriginal Visions: The Cave Art of Baja California” (Oct. 13); in the Petaluma Center, classical guitarist John Stover gives a recital and lecture on “The History of the Guitar” (later on Oct.13); and poet Marjorie Agosin reads from her collection Tapestries of Hope, Threads of Love (Nov. 3). 1501 Mendocino Ave., Santa Rosa. 527-4372.

Paul Taylor Dance Company
Receiving critical acclaim wherever it goes, this troupe has performed in more than 400 cities all over the world since it was founded 42 years ago. Now Sonoma County residents can experience Paul Taylor’s genius in this rare performance at the Luther Burbank Center Oct. 14. 50 Mark West Springs Road, Santa Rosa. Tickets are $12.50-$30. 546-3600.

Dar Williams
One of contemporary folk’s newest and most original songwriters, Williams captures the spirit of her folk heroes with graceful lyrics, a supple voice, and an impeccable sense of melody. Opening the show is singer/songwriter/former seminarian Richard Shindell. Oct. 16 at Luther Burbank Center, 50 Mark West Springs Road, Santa Rosa. Tickets are $16.50. 546-3600.

California Small Works Show
Unlike in so many other arenas, small counts in this collection, where all the participating pieces are no larger than 12″x12″x12″. Now in its ninth year, the show features the works of more than 100 artists Oct. 15 through Dec. 21 at the California Museum of Art, opening with a reception Oct. 17. Ship entries before Sept. 21 or hand-deliver Sept. 27-28. 50 Mark West Springs Road, Santa Rosa. 527-0297.

Self-portrait With Shower Curtain and Tattoo: Aubri Lane is among the artists exhibiting at this year’s ARTrails open-studio event.

ARTrails
Over 100 artists invite visitors into their Sonoma County studios, giving the public a unique opportunity to meet with artists in their natural habitats–just like “Wild America,” only a lot less bloody. Two weekends, Oct. 18-19 and 25-26; attend the preview exhibition at the Sonoma County Museum Oct. 10. 579-2787.

John Lee Hooker
Hooker is one of the last living members of that generation of artists who spread the music of the Mississippi Delta north, influencing virtually all of rock ‘n’ roll. Opening for the blues legend is the rolling Duke Robillard from Roomful of Blues; Hooker’s daughter Zakiya will also be joining in for this evening devoted to the original blues. Oct. 18 at the Luther Burbank Center, 50 Mark West Springs Road, Santa Rosa. Tickets are $25. 546-3600.

Mystical Arts of Tibet
Buddhist lamas perform their exquisite monastic dances and multiphonic singing ( hitting two notes at once; don’t try this at home) in a sacred production for world healing. The Drepung Loseling monks have received official sanction for their efforts from the Dalai Lama himself. Oct. 22 at the Luther Burbank Center, 50 Mark West Springs Road, Santa Rosa. Tickets are $11.50-$17.50. 546-3600.

Carol Burnett
Get intimate with one of America’s most popular comic actors. The audience sets the agenda for an evening of conversation with this always funny woman. Oct. 30 at Luther Burbank Center, 50 Mark West Springs Road, Santa Rosa. $35-$55. 546-3600.

Ani DiFranco
Truly a self-made star, DiFranco began releasing her own albums on her Righteous Babe label at the age of 18. Now she’s one of the country’s most successful (completely) independent musicians; the praise just doesn’t stop for her soul-ragged, alt-folk stuff. Come dance in front of the stage! Nov. 1 at Luther Burbank Center, 50 Mark West Springs Road, Santa Rosa. 546-3600.

Cesaria Evora
The critically acclaimed Cape Verde singer graces the stage at the Luther Burbank Center with a voice like Bessie Smith’s and a style like no one else’s. Catch this Grammy nominee in her Sonoma County debut. Nov. 10 at Luther Burbank Center, 50 Mark West Springs Road, Santa Rosa. Tickets are $20-$25. 546-3600.

Mini Nutcracker
The ever-innovative Redwood Empire Ballet deconstructs The Nutcracker, offering a narrated and danced exploration of that ballet’s beginnings, with an emphasis on how choreography has variously interpreted this tale. Ballet director Steffon Long ends the performance by having his dancers present his own interpretation, entitled “The Ballet Formerly Known as The Nutcracker.” Sounds like a prince of a show. Nov. 10 at the Spreckels Performing Arts Center, 5409 Snyder Lane, Rohnert Park. Call for prices. 584-1700.