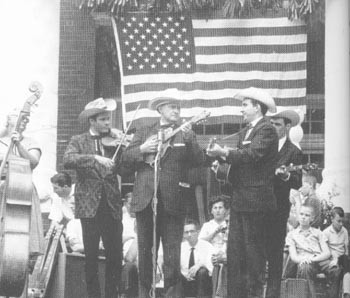 America’s love affair with roots music is heating up. This on-again, off-again romance–which most recently saw the O Brother, Where Art Thou? soundtrack rocket onto the pop charts–is likely to get a fresh start with the airing this week of the PBS four-part documentary American Roots Music (with a companion book and CD box set on the shelves this week as well), which traces the roots of rock by exploring a century of blues, folk, gospel, Tex-Mex, Cajun, zydeco, Native American, and country music.

This infatuation rises in the national psyche every once in a while–witness the 1960s plundering of blues giants by the British rock bands, the blockbuster success of Robert Cray’s 1986 smash hit “Smoking Gun,” the enduring hillbilly hipsterism of Dwight Yoakam, or Moby’s gospel-inflected electronica–all leading the mainstream media to trumpet the resurgence of roots music.

These days, American roots music enjoys a comfortable niche. There’s a legion of celebrated underground acts (including such autumnal singer/songwriters as Gillian Welch, Lucinda Williams, Julie Miller, and Iris Dement); numerous indie record labels, both big and small (Rounder, Bloodshot, Vanguard, et al.); a struggling radio format (Americana); a handful of magazines (No Depression, Living Blues); and now, after a century of commercial neglect, canonization in a PBS documentary bristling with rare film clips, interview footage, and a glorious music that personifies the ethnic and social diversity of the nation.

Now we’ll see if America really was cozying up to the old-timey music of O Brother (the soundtrack of which sold more than 2 million copies), or if it was just George Clooney’s comedic parody as one of the fabled Soggy Bottom Boys that won their hearts.

The four-CD set (a single disc of highlights also is available) showcases eight uniquely American musical forms. It contains single CDs dedicated to country and blues, respectively; a third disc split between gospel and folk; and a fourth CD devoted to Cajun/zydeco, Tejano, and Native American artists. There also is a 56-page booklet with an essay by Robert Santelli, a timeline, lots of photos, and artist biographies.

And there’s so much to love here: the high, lonesome wail of bluegrass pioneer Bill Monroe; the blistering harmonica solo of James Cotton, the inspiring power of gospel great Mahalia Jackson, the foot-stomping zeal of zydeco king Clifton Chenier.

Among the other highlights are a rare version of blues great Son House’s “Death Letter Blues,” a previously unreleased rendition of the radical chic Weavers’ (with folkies Pete Seeger and Ronnie Gilbert) “So Long, It’s Been Good to Know Yuh,” a vibrant “Ossun Two-Step” by Cajun journeyman Steve Riley and the Mamou Playboys, and a rockin’ “Sorry Boy” from Tex-Mex star Flaco Jimenez.

Of course, purists will argue that the box set barely scratches the surface of the vast repertoire, and they’d be correct. But as a sampler for enthusiasts (the 68-song collection has several new recordings and numerous rare tracks taken from archival film sources) or a primer for novices, this small sampling of seminal music is an important overview of what documentary film series director Jim Brown has called “our country’s most important cultural force.”