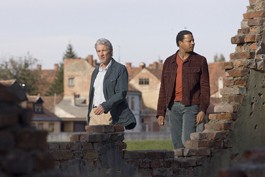 Speaking of TV news, Garrison Keillor once said, “You could learn more about the world if you just drank gin out of the bottle.” This is particularly descriptive of the 60-second bursts of international conflict offered by the networks. The “if it bleeds, it leads” style brings on reliable emotions: horror, despair and gratitude for the relative peace of one’s living room.

The Hunting Party, writer and director Richard Shepard’s follow-up to his evil comedy The Matador, focuses on the personal suffering of an American reporter still in Sarajevo. Simon (Richard Gere) disgraced himself live on national TV and has disappeared into badly paid freelance work. Years pass and Simon’s former cameraman and partner, Duck (Terrence Howard), turns up with novice reporter Benjamin (Jesse Eisenberg) for a quick shot in Sarajevo to document the fifth anniversary of the end of the war.

Simon tracks Duck down. Though he has no money and a drinking problem, he also has a half-brained plan to interview the internationally wanted fugitive who helped engineer Balkan genocide. The killer (Ljubomir Kerekes), known as the Fox, is a Serbian nationalist hiding in the mountains, where he is protected by loyal, homicidal followers. The three journalists head off into the Serbian wilderness. Halfway up the mountains, Simon reveals the true scope of his mission. It isn’t just to get the Fox’s side of the story, but to drag him back to justice.

A few drinks are necessary to catch up with Simon, and with the movie. It’s an alcohol-rich story, and it plays all the drunken emotions from false bravado to weeping nostalgia to blurted-out, offensive lines of dialogue. Not that there’s anything wrong with that. There’s a long streak of movies that go with too much wine, from John Ford’s Westerns to The Big Lebowski. What’s less likable is the way The Hunting Party tries to link the drunken self-indulgence of a once slick reporter with the suffering of the people he’s covering.

Yet The Hunting Party has something: a deliberate rattiness, a deep lack of worry about committing offense. There hasn’t been a movie quite this raucous about the war between the press and the dark, conspiratorial side of U.S. policy since Oliver Stone’s Salvador.

The Hunting Party is a fictionalized adaptation of Scott K. Anderson’s “What I Did on My Summer Vacation” article for Esquire. The fictionalized stuff is obvious, such as the night meeting with some Dietrich of the Balkans who runs the local mafia; it’s Diane Kruger, and she gets to make a juicily-accented threat: “Nyot even Gyod can hyelp you.” The story of the U.N.’s haplessness rings true, and the true-life failures are novel, as when NATO published an 1-800 we-tip number you couldn’t dial from anywhere but the United States.

Just as Shepard brought out the caddish side of Pierce Brosnan that wasn’t often a part of Bond films, Shepherd also manages to wake up Richard Gere. Gere has been a placid, gray bore for years, so abstracted by his inner peace that you practically wanted to shake him. But he’s avid here. It’s a real change to see him behave as what they used to call a heel. Unfortunately, the genuinely exciting actor Terrence Howard (Hustle and Flow) slouches through the buddy role, idly picking at a guitar.

The upbeat finale of this wildly uneven movie looks like the perfect example of the kind of American simplemindedness Shepard is trying to denounce. (And the film’s title-card comment at the end about bin Laden is infuriatingly smug.) Shepard is obviously far smarter than the ordinary director, but his nerviness fails him. The film takes regular turns into the kind of cuteness that can make network news a worse central-nervous depressant than hard alcohol.