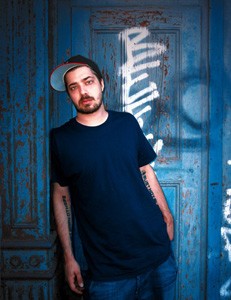 Kiltered: Aesop Rock generally rhymes as though there’s a long hook attached to the side of his mouth.

Aesop Rock speaks the speech trippingly on the tongue

Usually when I overhear people complain about hip-hop, it makes me want to puke. But the old-timer I met the other day had an interesting point to make. “To me, that’s not music,” he said. “It’s more like giving a speech with a drum.”

I thought it was a great explanation–you know, a speech. A speech has respect, dignity or, at the very least, validity.

Yet unlike a proposal by a senate majority leader, for example, there is very rarely a transcript available for hip-hop songs. Only a small percentage of hip-hop albums contain printed lyrics, and it’s easy to understand why: a libretto would be an unnecessary exercise in reiterating the blatant. When a car pulls up playing a hip-hop track, it’s probable that you’ll be able to make out every crystalline word.

Unless, that is, the car is blaring Aesop Rock, in which case you should (1) consider yourself lucky and (2) listen hard.

Aesop Rock springs from a teeming well of highly individual hip-hop artists, and in the past five years that well has been overflowing from coast to coast. Its pioneers are alternately labeled “personal hip-hop” (Atmosphere); “backpack hip-hop” (the Bay Area Anticon collective); “hip-hop straight from the fuckin’ underground” (usually some kid in his bedroom with a laptop); or even the painful “emo-hop,” which I swear I heard someone once brandish in reference to Sage Francis.

These labels provide a traceable lineage throughout our repeated musical history. Look back to the 1970s, when rock and roll, at the restless age of about 25 or so, got weird. Hip-hop is about the same age, and while the mainstream remains as bloated as ever, it’s getting a little strange on the independent scene: Anticon’s stuff is like overwrought acid rock; Atmosphere’s sort of a self-absorbed glam rocker at this point; the kids in their bedrooms are spearheading a punk-rock movement; and Sage Francis is a one-man prog band, relying on cutting-edge distractions to hide his murky points.

Aesop Rock has no ’70s comparison, and if he’s got a label, he’s given it to himself with his hard-earned literary moniker. When his lyrics are decipherable, they’re brilliant, but he generally rhymes as if there’s a long hook attached to the side of his mouth which someone in the wings is tugging at random. Thus, the dense writing for which he is famous has long been the subject of meticulous fan debate.

With the release of Fast Cars, Danger, Fire and Knives (Def Jux), the Brooklyn native has laid all lyric debates to rest, as accompanying the seven-song EP is an incredible 88-page lyric book spanning his entire recorded output so far (and justifying the $16.98 list price).

Most printed hip-hop lyrics, no matter how impressive they sound on record, unavoidably appear shallow and trite on paper. Aesop Rock’s words, however, read like the creatively pieced-together nightmares of a thesaurus on methamphetamines. Let’s flip open the book and grab a random sample: “Sensationally seismograph stabbing away on stone tablet to sketch a grouchy future. I drifted out the main spelunking unit with watered-down sample of cancelled development, courtesy America.”

Aesop Rock’s more cohesive moments center around his landmark album Labor Days, which spins tales loosely woven around the American working week. I saw him at a small club in San Francisco around this time, and onstage, distracted and disheveled, he looked like he hadn’t worked a day in his life. The lyric book, however, proves that Aesop Rock has an intriguing view of the 9-to-5 grind.

Now I find I have been wrong all along. According to the official transcript, mankind’s collective “sulk” is the result of “one angry Zeus fist blistering cult pulp in bulk.”

And even though it doesn’t make much difference, it’s still good to know.