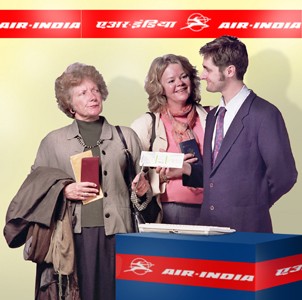 Terrence McNally’s A Perfect Ganesh, like much of the work presented lately by Pacific Alliance Stage Company (Proof, Dancing at Lughnasa, The Drawer Boy), is the kind of theatrical piece I think of as an “onion play.” In traditional narrative structures–the non-onion variety–a play’s dramatic momentum is based on mounting tension as each scene becomes the foundation for the next, with the whole thing leading in linear fashion toward some logical climax. Onion plays, however, are strategically stratified mechanisms, where much or all of the drama is derived from the gradual peeling back of layers, rather than the escalating collision of plot points.

In the opening scenes of A Perfect Ganesh, directed by Hector Correa, we are allowed to make certain assumptions about the primary characters–in this case, two women embarking on a two-week excursion to India–and as soon as we have jumped to the expected conclusions about who these women are and what they are about, everything changes and changes again as layer after layer of emotional skin is stripped away, revealing the little truths that are hidden beneath each woman’s carefully constructed surface.

The women–brittle, judgmental Margaret and wounded, soul-sickened Katharine–are each seeking healing in India, though each for different reasons and each in a different way. The facade that Katharine (a marvelous Kate Brickley) shows to the world is that of a chipper and optimistic, spiritually attuned and loving woman, but she is literally haunted by a horrifying family tragedy that has left her plagued by guilt, desperate to find someone to blame and powerfully attracted to mystical remedies for her bruised soul.

Katharine seeks solace in everything from relaxation tapes to strange fantasies of psychic absolution earned only by kissing a leper, as she says, “full on the lips.” She is the kind of person whose apparent benevolence and generosity is a front, a desperate attempt to cover up years and years of aching neediness. She wants to be a better person, but is less certain how to be good and kind than she is about how to appear good and kind. In attempting to abandon certain prejudices, she has really only swapped them for others.

Brickley plays all this colliding and collapsing emotion with breathtaking grace, peeling back the layers of her character to reveal the gradually emerging person that we in the audience can see, but she cannot. In India, Katherine will find much of what she is looking for, and plenty she is not.

Margaret appears to be Katherine’s complete opposite. Played with astonishing credibility by Phoebe Moyer, Margaret is the kind of person most people dislike at first sight. Angry, combative and contemptuously bigoted, Margaret, unlike Katherine, is not seeking a spiritual catharsis and would clearly not welcome one if it came along. She has come to India to see the Taj Mahal, believing that it will put her life in some sort of perspective. It does, of course, but by then India has worked its magic on her against her will, stripping away those pesky layers to reveal a frightened, world-weary individual who may be a good deal wiser than we or she suspected.

As Katherine and Margaret come face to face with assorted travelers, American expatriates, Indian locals and each other, the story becomes increasingly dreamlike and occasionally unpleasant, but always mesmerizing. The excellent four-actor cast is balanced by a shape-shifting, accent-swapping Joseph Parks, who takes on a whole parade of small male character roles: Katherine’s husband, her dead son, an oddball flight attendant, a desperately ill American tourist, a cynical tour guide and a practical leper.

All of this Sturm und Drang is narrated, and occasionally intervened with, by the benevolent, elephant-headed Hindu god Ganesh, a deity with a penchant for taking the form of various people in order to lend a kindly ear, to offer a bit of otherworldly advice or just to observe the actions of the mysterious mortals. Played gracefully by Michael Barr, with a sweet blend of compassionate concern and merry amusement, Ganesh is the glue that holds this onion together, and the elegant force that gracefully, unforgettably pulls it all apart.