If you're an immigrant, at least Uncle Sam wants you 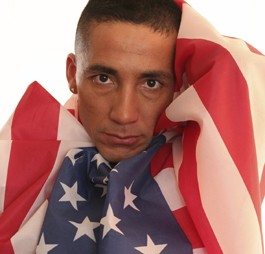 Wrapped in It: Armed forces recruitment is increasingly focused on the Latino community, luring young soldiers with the promise of citizenship for them and their families.

Jesus was an easy mark for the recruiter. A boy who fantasized that by joining the powerful, heroic U.S. Marines, Jesus thought he could help his own country fight drug lords. He gave the recruiter his address and phone number in Mexico, and the recruiter called him twice a week for the next two years until he had talked Jesus into convincing his parents to move to California.

Fernando and Rose Suarez sold their home and their laundry business and immigrated with their children. Jesus enrolled at a high school known for academic achievement. But the recruiter wanted him to transfer to a school for problem teenagers, since its requirements for graduation were lower and Jesus would be able to finish sooner. He was 17-and-a-half when he graduated from that school, still too young to enlist on his own, so his father co-signed the enlistment form, as the military requires for underage recruits.

Three years later, at the age of 20, his body was torn apart in Iraq by an American-made fragmentation grenade during the first week of the invasion. In the Pentagon’s official Iraq casualty database, his death is number 74.

In the Iraq war, citizenship is being used as a recruiting tool aimed specifically at young immigrants, who are told that by enlisting they will be able to quickly get citizenship for themselves (sometimes true; it depends on what the Immigration and Customs Enforcement branch of the Department of Homeland Security finds) and their entire families (not true; each family member has to go through a separate application process). Nevertheless, with the political pressures on Latino families growing daily under this administration, many young Latinos are unable to resist the offer, which immigrants’ rights activists see as blatant exploitation of a vulnerable population.

Jesus, like the large majority of new military recruits, was signed up through the Delayed Entry Program (DEP), which operates in high schools, GED programs and home-schooling networks across the nation. The well-crafted messages on the DEP website have been in development ever since the draft ended and the all-volunteer military was initiated after Vietnam. The DEP’s persuasion campaigns originally targeted black teenagers with the message that military service equaled jobs that promised fair treatment regardless of race. Recruiters were able to easily meet their quotas until the early ’80s, when enlistment rates of young African Americans began to decline and the rates for Latinos began to rise for reasons the military did not understand.

Over the next decade, the military commissioned a number of studies on the relationship between race and ethnicity and the “propensity to enlist.” As Latinos became a more important source of recruits, the Pentagon hired market research firms to design advertising campaigns that addressed the issues they care most about: family pride, education and citizenship.

Today, the Navy, Marine Corps and Air Force recruitment campaigns focus largely on education and benefits to families. The Army’s campaign, created by Cartel Impacto, a cutting-edge firm from San Antonio, uses the firm’s proprietary “barrio anthropology” and grassroots “viral and guerrilla marketing” techniques to “go deep into the neighborhoods and barrios” in order to tell Latino families how the military can help them have the kind of life they want in America.

These marketing campaigns support the work of recruiters who, as mandated by the No Child Left Behind Act, must have free access to students in every one of the country’s public schools. Recruiters operating in high schools try to get children as young as 14 to sign up for the military’s DEP, which allows them to finish high school before going on active duty.

Under the program, these young “men and women,” as recruiters are trained to call them, are targeted, tested, gifted, video-gamed, recruitment-faired and career-counseled into enlisting before they turn 18. They are also paid $2,000 for every friend they talk into signing up with them and, until recently, were paid $50 for every name they brought in to a recruiter.

In addition to cash, students who help recruiters to enlist their friends are promoted to a higher military rank, from Private E-1 to Private E-2, even before they are out of high school. Private E-1’s are paid $1,301 a month, while E-2’s earn $1,458 per month. Further, getting a second high-scoring friend or two more low-scoring friends to enlist earns the student another promotion, to Private E-3, and kicks the entry pay up to $1,534 per month.

Another way DEPs can earn extra money is to volunteer for hazardous duty. Students who sign up to be in a combat unit or dismantle explosives or handle toxic chemicals get an additional $150 per month on top of their basic pay. Volunteering for hazardous duty, however, is a relative concept. Since DEP recruits do not, by definition, have a college education, there are few other military occupations open to them.

With the greatest need in this war being combat soldiers—so much so that even highly trained Air Force personnel are being sent to work with Army ground troop units—the chances of any DEP recruit getting out of combat duty and its attendant hazards are slim. The implications of these conditions for young immigrants can be deadly.

The Department of Defense’s casualty database doesn’t publicly break down the dead and injured by ethnic group, but a tally of Latino surnames found that between Jan. 10 and July 1, 2007, 20 percent of the 174 young people ages 18 to 21 who died were likely to have been Latino. With the intensification of DEP recruiting efforts in largely Latino high schools since the invasion began, this is no surprise.

How many of these young Latino recruits are illegal immigrants? “Nobody knows,” says Flavia Jimenez, an immigration policy analyst at the National Council of La Raza. “But what we do know is that recruiters may not be up to speed on everybody’s legal status. We also know that a significant number of [illegals] have died in Iraq.” The recruitment of illegal immigrants is particularly intense in Los Angeles, where 75 percent of high school students are Latino.

“A lot of our students are undocumented,” says Arlene Inouye, a teacher at Garfield High School in East Los Angeles, “and it’s common knowledge that recruiters offer green cards.” Inouye is the coordinator and founder of the Coalition Against Militarism in Our Schools, a counter-recruitment organization that educates teenagers about deceptive recruiting practices. “The practice is pretty widespread all over the nation,” she says, “especially in California and Texas. The recruiters tell them, ‘You’ll be helping your family.'”

Inouye referred me to Salvador Garcia, a student whose father had been deported and who had been approached by a recruiter when he was a freshman (he is now a senior). Garcia says the recruiter told him, “If you need papers, come and fight for us and we can get you some, and then you’ll never have to mess with immigration.” When Garcia told the recruiter that he was born in this country, the recruiter responded, “Do you have anybody in your family that needs a green card, needs papers?” Garcia told him that his father, who had entered the country illegally from Mexico, had recently been deported. “If you join the military you can get your father back,” the recruiter reportedly said. “It’s not a problem. We can get him his papers, and nobody will ever bother him again.”

Garcia says he almost signed the enlistment form right then, but says he was stopped by the realization of “how it’s all connected—the war and Mexico and immigration.” He is now active in the counter-recruitment movement.

Despite the mounting evidence of these recruitment practices, the Pentagon denies that illegal immigrants are in the military. “If there are any,” says Pentagon spokesman Joseph Burlas, “then they have fraudulently enlisted, and when they’re caught, they are discharged.”

An illegal immigrant serving in Iraq, Jose Gutierrez was one of the first members of the U.S. armed forces to die during the invasion. Gutierrez had made his way to this country from Guatemala in 1996, at the age of 15, to escape the violence perpetrated by the death squads, only to be killed in Iraq by friendly fire. When the Pentagon announced his death, it came in the form of a carefully managed PR campaign that included a posthumous award of citizenship for Gutierrez, presumably to show that if an illegal immigrant manages to enlist and make it to Iraq, he will be rewarded.

However, Gutierrez remains the only illegal alien on the U.S. casualty rolls whose real place of birth is listed, while others who die are reported to be from Boston or Los Angeles, or wherever a recruiter finds them. In New York City, according to counter-recruitment activist Melida Arredondo, whose young stepson was killed in Iraq, DEP recruiters instruct illegal immigrants to write “New York City” as their “home of record address” on the enlistment form, and to write “pending” for their Social Security number.

Why is all of this happening, when the enlistment and expedited naturalization of illegal immigrants serving in the armed forces is specifically authorized in U.S. law? An executive order signed by President Bush on July 3, 2002, provided for the “expedited naturalization for aliens and noncitizen nationals serving in an active-duty status in the Armed Forces of the United States during the period of the war against terrorists of global reach.”

Under this order, any noncitizen in the military can apply for expedited citizenship on his first day of active duty. Not only is this order still in effect, but it has been codified in the National Defense Authorization Act 2006. With the law so clear on this issue, the treatment of illegal immigrants in the military is difficult to understand.

Stock notes that a section of the 2006 Immigration and Nationalization Law locates the naturalization of immigrants serving in Iraq firmly in the tradition of naturalizations during wars dating back to WW I. During these wars, citizenship was granted solely on the basis of three years of honorable service or honorable discharge.

“Recruiters trying to fill slots have historically pressed vulnerable people into service,” says Dan Kesselbrenner, director of the National Immigration Project, a program of the National Lawyers Guild. “But for some people, it’s the only way they are ever going to get citizenship.”

What recruiters do not tell their targets, however, is that the military itself has no authority to grant citizenship. It forwards their citizenship applications to ICE, which will then scrutinize them and their entire families for up to a year.

Recruiters also do not tell their targets that citizenship can be denied for the very same past criminal offenses that the military may have overlooked when admitting them—such as being in the country illegally. Nor do they tell recruits that citizenship can be denied for any kind of dishonorable behavior, which includes refusing to participate in combat.

The Comprehensive Immigration Reform Bill, which failed to pass the Senate in June, proposed to give legal permanent residency to any “alien who has served . . . for at least two years and, if discharged, has received an honorable discharge.” In other words, illegal immigrants have been in the military all along, and the government was getting ready to admit it. With the bill’s defeat, they will be forced to remain hidden, and the sacrifices they have made for this country will continue to go unacknowledged.

Next ArticleEssay: Jam as Muse