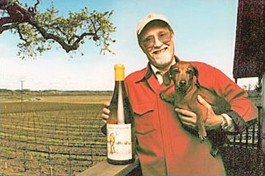 Last Tuesday evening, at the start of the weekly summertime concert in the Plaza, series producer Dan Zastrow took the stage to make a sad announcement, informing the large crowd that “Dr. Toad”–Robert “Todd” Williams, founder of the influential Toad Hollow Winery in Healdsburg—had passed away that morning. Leading the gathering in a toast to Williams, Zastrow quoted Williams’ friend Mark McMullen, saying, “Todd only yelled at the people he loved . . . and Todd loved everybody.”

Williams had struggled with heart problems for several years, and he’d been ill in recent months, but his passing still hit his friends and fans hard. Known for his oversized personality and penchant for telling wild stories, the big and bearded Williams (older brother of actor Robin Williams), founded Toad Hollow with winemaker Rodney Strong in 1993, tirelessly promoting not just his own award-winning wines, but the notion of affordable wines for nonpretentious wine drinkers. Notably whimsical (all of his wine labels featured odd names and paintings of toads doing curious things), he was the P. T. Barnum of wine, bringing a deliberate sense of fun to an industry too often seen as stuffy and snobbish.

“The thing about Todd Williams,” says McMullen a few days after Williams’ death, “is that he was always outside the box. He lived there, outside that box, thumbing his nose at pretentiousness. And he was a very nice guy. Anyone who talked to Todd for 10 minutes walked away believing that Todd was their new best friend—and a lot of times it was true. He was that kind of guy. He was a big man with a big heart, with great big arms that could hug a whole group of people all at once.”

Adds Erik Thorsen, Toad Hollow’s controller and Williams’ longtime friend, “Todd got into this business after years of having owned bars and restaurants all over the world, because he felt that too many people were intimidated by wine. Todd believed that wine should a part of people’s everyday lives, not just something that was celebratory. He wanted people to know they could have a glass of wine with a bowl of chili at home in front of the television or with a grilled cheese sandwich. He believed that wine should be fun, and he made it fun by spreading the message that the rules were not important. If you like red wine with your fish, have red wine with your fish, and enjoy it. That was Todd’s thing: wine is to be enjoyed, it’s not some exotic ritual for rich people.

“On a personal level,” he adds, “I will miss Todd’s stories. Whether they were true or not, I don’t even care. He was a great storyteller. He lived an amazing life, and in the same way he loved sharing his wines with the masses, he loved sharing his life with everyone he met.”

There will be a public celebration of Todd Williams’ life on Saturday, Aug. 25, from 2pm to 5pm, at Richards Grove and Sara Lee Vineyards, 3575 Slusser Road, Windsor. All are welcome.