Full details on the inside-out flower plus a Sondra Bernstein recipe. 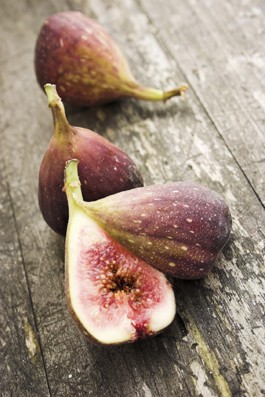 Fecund: Who’s betting that Eve actually ate a fig, not an apple?

There is no fruit quite like the sweet and silky fig. In addition to being an inside-out flower (really, look it up), it’s got such an intractable link to the deepest chasms of written history that it seems only proper, at the very least, to remove your hat when this fruit is brought through the door. In nearly every fable from the Old World, there seems to be a basket of figs somewhere in the room, and in who knows how many novels, a ripe fig on a branch signifies some tired sexual metaphor. Fanatics tout figs as gems of the garden and idols of the kitchen, and many a chef-cum-author has pondered the fig’s romantic place in Mediterranean Europe, where extinct gods, religious prophets and great athletes all supposedly relished this uncomely fruit.

Magnates in the fig biz assert that figs are more popular than ever, but it’s no demand that California can’t handle. The orchards of Fresno, Madera and several other hot-tempered counties produce 100 percent of the nation’s dried figs and 98 percent of those sold fresh. Officials with the California Fig Advisory Board (CFAB) in Fresno report that fresh fig consumption has increased by 60 percent in the last five years, as American consumers gain interest in eating the same foods that the heart-healthy, wine-guzzling societies of Mediterranean Europe enjoy.

At the same time, however, we are steadily uprooting California’s fig orchards. In the 1990s, over 20,000 acres of figs grew in commercial groves, mostly in the San Joaquin Valley. Today, less than 10,000 acres remain. Most of the lost orchards have been sacrificed to housing tracts, while others have been converted to such crops as almonds and pistachios. To combat this crisis, CFAB is waging a fig-appreciation campaign, weighted by the annual Fig Fest. An outdoor gathering of chefs, growers, foodies and fig fanatics, the festival was held Aug. 11—yep, you missed it—in Fresno. Just as well.

Ah, Fresno. Sadly, much of this city festers where fig trees once grew. In fact, a large region of northern Fresno is called Fig Garden, where 600,000 fig trees once produced vast crop loads.

“In the last 10 years, we’ve lost the last of the inner-city fig gardens,” says Felix Muzquiz, who organized this year’s Fig Fest with the help of CFAB and Slow Food USA. “But a lot of people are beginning to appreciate that figs really are a unique heritage of Fresno that we need to celebrate.”

The vast majority of the state’s figs are dried. Only the scantest fraction is sold fresh—so few, in fact, that CFAB doesn’t even bother keeping harvest records. But that’s changing, and many authorities believe that fresh figs represent the future of the industry. They go for a better per-pound price than the dried ones and can be produced on a greater scale. Richard Matoian, manager of CFAB, says that while fig orchards continue to vanish, the conversion of dried fig groves to fresh has balanced the decline.

“When I look at our acreage,” he says, “I see it going down, but the production level is remaining steady.”

Fresh figs are not an easy path to fortune. The logistics of harvesting and distributing such a soft fruit can be a nightmare of time, money and economics. Eric Sorensen, a distributor in Pompano Beach who works with luxury-food-service clients, came west for the Fig Fest to have a face-to-face chat with the men and women who manage the industry. Many of the figs he receives, says Sorensen, are not ripe.

“A lot of the figs we get are substandard, but they’re a mountain of potential, and they’ve got to be picked ripe.”

Figs arrive in two crops annually, the first in June, then a larger one in August that runs late into the fall. During the winter and spring off-season, figs are rarely, if ever, shipped in from the Southern Hemisphere. “Figs may be the very last seasonal commodity,” Matoian says.

Yet California ranchers, through such natural means as altering the schedules of pruning, watering and fertilizing, have recently harvested figs as early as mid-May and as late as mid-January. Matoian expects that in coming years, consumers will find fresh California figs as early, or as late, as April.

“Everything else you can just ship in from other areas, and I feel really good that our own local growers are finding ways to extend their own season without relying on outside regions.”

Young orchards of fig saplings grow sporadically throughout the Central Valley, and it is unlikely that the California industry will ever perish completely. Regardless, residents of the North Bay need not rely on the Central Valley for their figs. The local climate is ideal for producing most varieties, and there is no place like your own backyard for producing the highest quality organic figs available. In fact, many unusual and rare varieties that are not produced commercially can be had no other way than by growing them yourself.

The rare and beautiful tiger-striped Panache, green with white vertical stripes outside and raspberry-red flesh inside, is considered by many to be the most delicious. It and other unusual figs can be acquired from such specialty garden centers as the Wolfskill Experimental Orchards in Winters, which provides those interested with cuttings of any of 275 fig tree varieties. Planted in a pot of rich soil, six-inch “fig twigs” snipped during the dormant winter months will sprout leaves in spring and produce fruit in as little as three years.

And finally, if you covet the fig tree of your neighbor, covet no more. Instead, just ask for permission to take a twig snipping next January. Powder the stub end with a common root fertilizer and plug it into the ground. Your little world will soon become a better, figgier place.

6 figs, grilled and cut in sixths

Place warm water in bowl and sprinkle yeast and sugar over the top. Allow mixture to begin to foam. In a food processor, work together all ingredients except 2 teaspoons of oil. Dough may require more water or flour. Work dough until it forms a smooth ball.

In a bowl at least twice the size of the dough, coat the inside with the remaining olive oil. Place dough in bowl, roll with oil and cover with a damp towel. Place in a warm area and allow dough to double in size (about 1 1/2 hours). Punch dough down, recover and let rest for an additional 30 minutes.

Preheat oven to 500 degrees. Divide dough in to two pieces and roll out each piece on lightly floured surface to 1/4 inch to 1/2 inch thick. Sprinkle pan with semolina flour and set dough on it. Cover evenly with ingredients placing cheese on last. Bake until brown for approximately 10 minutes.

Reprinted by permission from The Girl & the Fig Cookbook

Next ArticleEssay: Jam as Muse