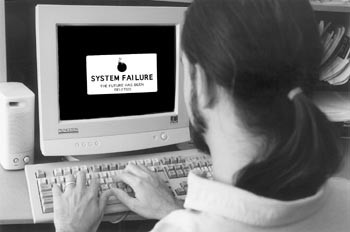 While the clock ticks, Y2K activists work to strengthen our communities

BY THE TIME midnight arrives on Dec. 31 of this year, a mere 47 weeks or so from now, a lot of folks will be so tired of hearing the term “Y2K” that they’ll stay home with the blankets up over their heads, either to avoid any further mention of the Next Millennium or out of fear that, once the clock strikes 12, all hell will commence to break loose. The much-discussed Y2K Bug–that bothersome technical snafu that may or may not cause a hundred million computers to mistake the last two digits of the year 2000 for the last two digits of the year 1900–has raised serious concerns in all quadrants of society, with predictions of massive electrical blackouts that may last for weeks or months, and shortages of everything from water and food to available public services such as the police and fire departments.

While certain all-knowing, acronym-addicted extremists are calling it TEOTWAWKI (The End of the World As We Know It)–and others merely roll their eyes, shake their heads, and staunchly insist that nothing bad could possibly happen (nothing more apocalyptic than a few off-line ATMs at any rate)–there are still others who are carefully taking the middle road.

When asked what is likely to occur when the big 00 glides onto the digital calendars of the world’s all-important computer systems, these latter individuals will firmly reply, “We don’t know,” a reassuringly sensible response.

“It’s true,” states Shepherd Bliss, a north county organic farmer, author, and longtime social activist. “We don’t know what’s going to happen. So, many of us are following the slogan ‘Prepare for the worst, and hope for the best.’

“Beyond that,” he adds with an easygoing chuckle, “we really can’t make any predictions.”

While computer experts and engineers are racing the clock to fix the problem–rewriting the codes over and over to teach the machines to read four-digit dates–an incredibly motivated, spectacularly well-organized grassroots movement has shifted into its own high gear. Not knowing what’s to come, they are, as Bliss states, preparing for the worst.

This preparation includes following your basic disaster-readiness protocol: stockpiling canned and dehydrated foods, batteries, battery-operated lamps, blankets, sleeping bags, food, gasoline–and plenty of water, enough to allow each family member one gallon per day for however many days one anticipates we’ll be without public utilities. This could be a matter of hours or days or–as some especially cautious folk insist–the utilities might no longer function at all. Some of those who own their own property and don’t already have a well are investing in the cost of having one drilled.

But at the heart of the movement is the notion that, should a full-scale disaster occur–be it Y2K or and earthquake or other natural disaster–the best way to stay safe and well cared for is to make sure that the entire community is safe and well cared for. Stressing the positive side of a situation that might otherwise scare the wits out of everyone, these Y2K activists are working to create nothing less than a widespread sense of interdependent community.

“The advantage of prudent planning, which is the path I am taking, is that it builds community along the way,” says Bliss. “The two courses we must avoid are denial–that’s where most people are, and will be for a while–and fear. The logical alternative is prudent planning. It doesn’t matter if it’s Y2K or an earthquake or any other natural disaster. If we prepare ourselves, and build a sense of community, we’ll be ready for anything that happens.”

To that end, Y2K forums are being held across the nation with several already held in the county and more in the works. Support groups are being formed in neighborhoods, apartment complexes, city blocks, and rambling rows of farmhouses. Websites have sprung up listing preparations that can be made and giving information on how to pressure city and county officials to take the Y2K threat seriously. Everyone from the Red Cross to the Utne Reader has published a Y2K survival manual. Some neighborhoods have already started community gardens and have organized lists of all local residents, including the addresses of doctors and neighbors trained in CPR. While still building momentum, the response has been phenomenal.

People of all classes and income levels, all belief systems and political persuasions, have been filling the seats at the increasingly common Y2K forums.

A few weeks ago, the residents of Boulder, Colo., held their first public Y2K forum, and 700 people showed up. In Sonoma County, groups have been meeting for months. There are now monthly meetings in Sebastopol, Petaluma, Santa Rosa, Graton, and Forestville, with others being added all the time. The city of Santa Rosa, in part to quell rising public concerns, will be holding a Y2K forum on Feb. 18, at 7:30pm, at the Santa Rosa Veterans Building, where representatives of PG&E, Pacific Bell, Sonoma County safety agencies, and others will be answering questions.

The first countywide Y2K action day–in which participating families deliberately shut down all electricity, gas, and water in their homes for 26 hours of practice without them–was held last weekend. A number of community churches, most notably Grace Fellowship in Santa Rosa, have joined the Y2K effort, providing space for preparation meetings and information centers.

SPEAKING OF churches, though much noise has been made of the way certain fundamentalist church groups have embraced Y2K as proof of the impending apocalyptic end of the world–as foretold in the Bible’s frightening book of Revelations–members of Sonoma County’s Y2K community are quick to point out that no such Armageddonish gloom and doom have been introduced into the group’s safety-first ideology. In fact, there seems to be none of the pumped-up, clench-toothed brand of survivalism one might readily assume was at the core of such a movement.

“I’ve not met a survivalist or a doomsdayer since I got involved,” insists one active contributor to a local Y2K website. “These people all got plugged into Y2K as an opportunity to build more resilient communities and to create strong human connections we’ve lost over time.”

Echoing a guarded uncertainty that Y2K will turn out to be all that big a problem after all, the writer adds, “Nobody knows. So the most prudent thing is to prepare ourselves.”

Fred Beeler of Sebastopol has been preparing for months now. His online checklist of necessary Y2K provisions has become a much-prized, much-quoted mainstay of the Y2K community. He’s helped numerous neighborhood Y2K groups set up shop, and was handpicked to create Grace Fellowship’s Y2K Resource Center, where a Y2K hotline (526-1926) is maintained, training sessions take place, and all manner of handouts and literature are made available.

“People are really starting to band together,” says Beeler. “People are scared, so rather than sitting there like a deer in the headlights, we should be doing something positive, and doing it together.”

One of the more striking aspects of the local Y2K community’s efforts is the prevailing attitude of positivity that is being promoted as an alternative to fear. To hear some of these people speak, one would think they were looking forward to having the industrialized world come crashing down.

“I think Y2K is a blessing, a gift,” agrees Bliss. “It’s what some people have been praying for. We’ve been on a collision course with nature on this planet. There’s been such a violation of the earth, so if we lose the tools of that violation, we can rebuild along saner lines.”

Even so, its clear that a full-scale return to a no-industrial, agrarian society is viewed as merely the icing on the cake. The real appeal of Y2K is not what might happen then, but what is happening now.

“We are getting to know our neighbors again,” affirms Bliss. “We are banding together and learning from each other, sharing our strengths and preparing for the unseen. It’s what communities once did without question. What we are witnessing is the beginning of a movement, possibly the most significant social movement since the civil rights and women’s movements.

“I’ve never been more excited,” he admits. “I’m looking forward to the year ahead of us. I’ve lived through a lot, and seen a lot during my life, but 1999 is already turning out to be the most exciting year of my life.”