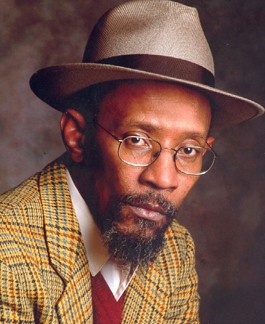 Words to Groove By

Most know Linton Kwesi Johnson from his decades of seminal dub reggae, but the Jamaican-British poet hopes his spoken-word tour, which comes to Mill Valley’s 142 Throckmorton Theatre April 24, enlightens the masses to his music’s true origins. “I began as a poet, and all of my reggae recordings began live as poems,” he says from a tour stop in New York recently. “I thought it was about time I reassert my credentials as a poet.”

Mi Revalueshanary Fren, Johnson’s first paperback poetry collection released domestically, is a perfect introduction—or reintroduction—to his forceful gift for language. The book spans four decades of powerful words, from his classic chronicle of the hard immigrant life “Inglan Is a Bitch” to 2000’s “BG,” in memoriam of Bernie Grant, one of the first British parliament members from the Caribbean. Along with its accompanying A Cappella Live CD, the compilation conveys the inherent musicality of his language with a rich, commanding timbre. “The music itself is organic to the poetry,” he says. “It actually comes out of the rhythms of the poetry.”

The inclusion of some of his best-known songs offers proof, as in “New Craas Massakah,” a piercing account of the 1981 racist arson fire that killed 13 black residents of Southeast London and the police cover-up that followed. Absent the swaying backbeat of the original 1983 recording, his words become more fervent without sacrificing the infectious rhythm. Even in conversation, Johnson effortlessly creates poetry: “I’m coming from an oral tradition,” he says, “I’m writing for the page, as well as for the stage.”

More than anyone, Johnson writes for Caribbean immigrants in England, who continue to encounter hardships and brutality, just as he did upon arriving in London, where he still lives, at age 11. Belying his higher education and mastery of the English language, his works exclusively use the Jamaican Creole dialect. This makes “New Craas Massakah” all the more heart-wrenching: “di heat / an di smoke / an di people staat fi choke / di screamin / an di cryin / an di diein in di fyah . . .”

Although this takes some getting used to for many readers, the mere recitation provides a deeper empathy with the various poems’ subjects, bringing closer the actions told in the stories. “When I began to write verse, it seemed to make sense to do so in the language of the Caribbean community there,” he says. “For me, one of the criteria for poetry is authenticity of voice.”

Despite his poetry’s highly specific context, Johnson believes everyone can relate. “America is a country of migrants, so I’m sure there are a lot of parallels. Migration itself is what the postmodern world is all about,” he says. “You begin with a particular and hope you arrive at the universal.”

Johnson seems to transcend country lines in everything he does, and speaks authoritatively on multiple locales. “I always have this attachment to Jamaica because that is where I was born, and I’m still very much a Jamaican at heart,” he says. Unfortunately, things have not improved since he left the small Jamaican parish of Chapelton in the early 1960s. “It seems to have gone from one crisis to another, and I think that the middle classes and the ruling classes have made a mess of independence,” he laments.

Johnson does see hope, though, in the United States’ presidential election. “Whether Sen. Obama wins the nomination or the presidency or not, he’s already won, because he’s broken the mold in terms of people’s consciousness,” he says passionately, “ensuring the possibility that someone of color could become the president of the United States of America—the possibility at least.”

This sense of enduring hope is the strongest motif in Johnson’s work, even amid heinous atrocities. “I’m an optimist,” he says. “I think without hope we’re completely lost as human beings. Without hope, we’re nothing.”

With Mi Revalueshanary Fren, Johnson is the second living poet and first black poet ever to be included in the prestigious Penguin Classics series. Still, he remains humble as ever. “If you’re around long enough,” he says laughingly of the accolade, “sooner or later, someone will take notice of you.”