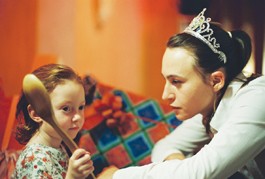 'Jellyfish' drifts along with the tumbling residents of Tel Aviv

So many movies try to get into the collisions and coincidences of city life, the little nicks and abrasions we inflict on one another. In Jellyfish, we get the God’s-eye view of connections, but that doesn’t weave this bright and fine film into a pat little daisy-chain of social mores.

Jellyfish is a 78-minute film directed by Israel’s Etgar Keret, a graphic novelist, teacher and littérateur. Previously, Keret wrote the novel Missing Kissinger as well as a graphic novel titled (in English) Pizzeria Kamikaze, which was adapted into the film Wristcutters: A Love Story. It, too, was a tale of collisions and coincidence, set in a purgatory for post-suicides. There, the newly dead worked the same dead-end jobs and puzzled through the same hard-to-suss-out relationships as they had on Earth.

The winner of the Caméra d’Or last year, Jellyfish is about a lot of misguided subjects looking for an object. It is consistently funny, both ha-ha and peculiar.Keret and Geffen’s version of Tel Aviv is a place where everyone is a natural, dry comedian, with a great gift for denial and a salesman’s ability to turn around any complaint. An example: The landlord comes in to raise the rent. The renter tells his landlord that the ceiling is leaking, and the landlord retorts, “What ceiling?”

That renter in question is the pretty, 20-ish waitress Batya (Sarah Adler), whose boyfriend just headed for parts unknown. She can barely bring herself to bleat out the word “Stay” as he goes, and then it’s time to cater to a wedding. Her point-of-view is a waltzing camera, moving among the guests to find the bride.

No bride. Keren the bride (Noa Knoller, above right) gets trapped in a toilet stall in the women’s room and breaks her leg crawling out. This cancels the honeymoon. Instead, Keren and her soulful Russian husband, Michael (Gera Sandler), go to a nearby, half-finished seaside hotel.

In the honeymoon hotel, Keren is prostrate with a bad leg and chronic dissatisfaction syndrome. This might have been an irritating plot thread if Knoller didn’t have such lush, satiny curves and such an adorable pout; at different angles, she reminds one of Gina Gershon and Amanda Peet. The new husband, baffled by his wife’s unhappiness, becomes friends with a female writer who is looking for help spelling the phrase “ending in disgrace.”

Israeli film is a cosmopolitan cinema, peppery and sophisticated, made by people too much under the threat of death to be trifling, and too harassed by the woes of modern life to be starry-eyed. Often, it’s a cinema with a testy relationship with God. It was bound to produce a crowd-pleaser for the aesthetic crowd, and Jellyfish might be it.