Get pickled, deviled, roasted at the Barlow 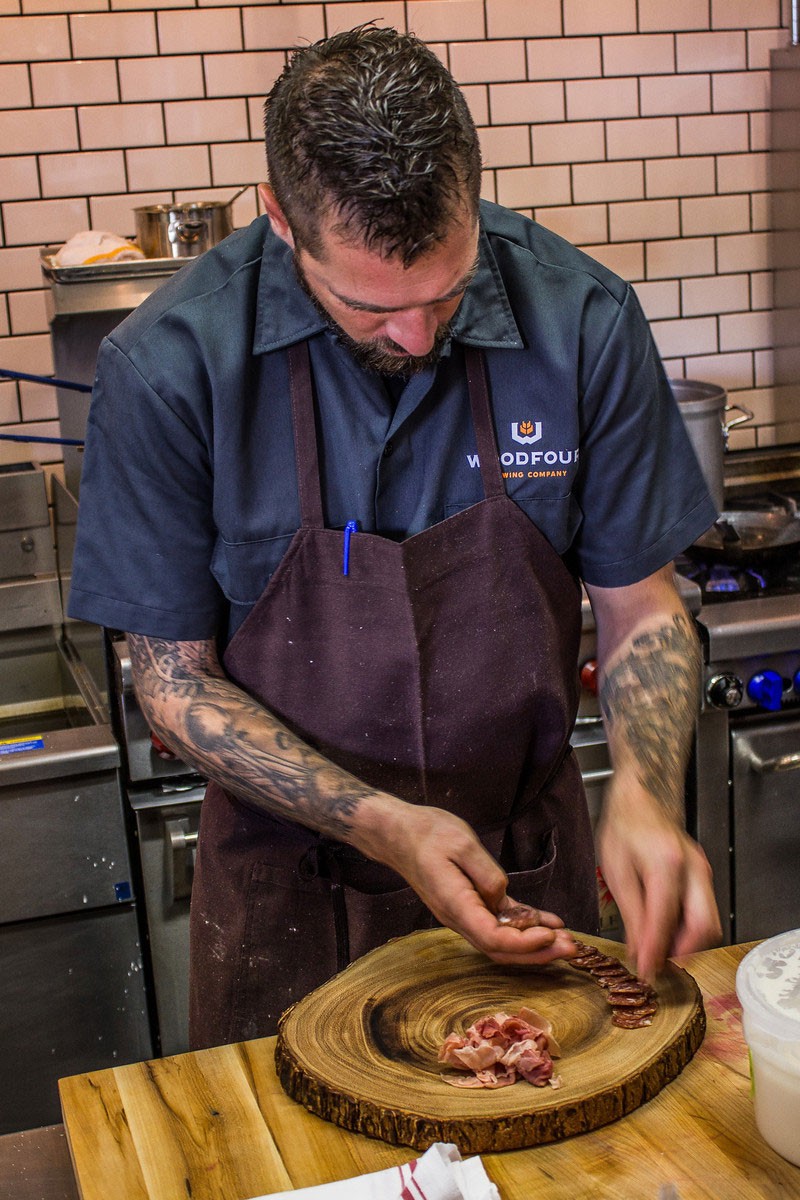 Goodnight, hot wings. So long, nachos. Farewell, burger and fries. How about yellowtail? Get your roasted padrons. We’re going to Woodfour tonight.

Anyone familiar with the gemlike food pairings now offered at wine tasting salons, or the “small plates” served at your better bistros, will recognize the fare at Woodfour, the long-awaited brewpub now open in Sebastopol’s food and crafts district, the Barlow. Anyone looking for a heavy basket of buffalo wings, on the other hand, might be disappointed.

The joint was founded by Seth Wood and Olav Vier, whose name happens also to be German for “four.” (Thus, if they open up an outlet in Germany, they’ll call it “Holzvier”). The interior is attractive and coherent, with views into the brewery and kitchen, and a hard-to-miss host station under a “wall of beer.” If there is a plasma panel tuned to a sports channel, I missed it (again, no buffalo wings). Instead, by way of explaining the menu, our server expertly animates a mental picture of shepherds scraping raclette by the fire. Now we’re hungry.

Heading up the menu, a decorative if lightweight plate of “bar snacks” ($6) includes an O’Keeffesque bouquet of undulating, oversize potato chips, dip and fried hominy corn nuts that, while making for bone-jarring chewing, are strangely addictive. A bowl of padrons ($6), the official pepper of the current era, is also tasty and diverting; pickled vegetables, spiced nuts and olives, too. As if wary of the smear of blue cheese at the bottom, fig and arugula salad ($10) huddles against one side of the bowl. Small plates of “animals” ($15) promise to similarly appeal to one’s higher functions.

For real nourishment, turn to Woodfour’s draft beer (8 ounces, $3.50; 13–16 ounces, $5). Like grapefruit juice in a kefir cocktail, the tangy, prickly, low-alcohol Berliner Weisse is easily taken for a probiotic health drink. The summer ale is exceedingly mellow, thick with mango and Meyer lemon flavor; the Roggenbier rye, cloudy and malty; the Belgian Dubbel, fermented in Pinot Noir barrels; the wheat stout, chocolatey, creamy, with vanilla pipe tobacco notes. Brewed with Taylor Maid coffee from right down the street, the porter tastes like a root beer float with coffee ice cream.

Alas, ask not for regular, “beer beer” here—even the pale ale is a “brett pale ale,” and quite sour—but hopheads craving an IPA might find one or two among the large, eclectic selection of international brews available by the bottle ($4.50–$22). Three snacks, four small beers and one tasting flight later, it’s goodnight, $48—but we’re not too sorry to see it go.