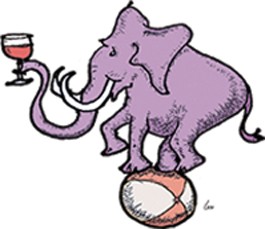 “The Point Reyes area is a foodie mecca, and when we’re out there, we meet people and talk to them,— says vintner Jonathan Pey. —Obviously there are a lot of whale and bird watchers, but increasingly, there are people out there to eat, too.— What there aren’t—in all of Marin, never mind the small jut of Point Reyes—are many places to drink, at least when it comes to winetasting. The Point Reyes Vineyards is a sweet family abode specializing in sparkling; the Ross Valley Winery sources grapes from Lodi and other areas outside of the North Bay and bottles them here. And, um, that’s it. Until now, with the storied Olema Inn providing the roost for the Pey-Marin Vineyards.

Opened earlier this month, the tasting room is actually a flight set up on the inn’s antique wooden bar, offering four Pey-Marin wines—Reisling, Pinot, Merlot and Syrah—for a nominal fee. Only the grapes for the Syrah are grown outside of Marin County; it thrives in Sonoma County. —We make bright, balanced wines that taste like grapes,— Pey says with a chuckle. —They don’t just taste like we can afford expensive barrels.— The Pey-Marin Tasting Room is open daily from noon to 4pm at the Olema Inn, 1000 Sir Francis Drake Blvd., Olema. $12 fee. 415.663.9559. . . .

In (loosely) related news, iconoclast, bassist and Primus singer Les Claypool has decided to expand his empire beyond mere stadium shows and marvelously strange films in order to hit the bottle with his new Claypool Cellars, a winery whose current motto is —Fancy booze for semi-fancy people.— Having already sold out the first run, the Pink Platypus (a Russian River Pinot Rose), he now offers his boutique 2007 Russian River Pinot Noir Purple Pachyderm. Those who purchase more than two cases at a time get the de rigueur discount, a bottle signed by Claypool and, sure, a T-shirt. Some fun dies hard. Wholesale and retail sales available. Visit www.claypoolcellars.com for more info. . . .

Raising funds for Napa Valley Jewish organizations has a nicely grape-drenched air about it, as the first Jewish Vintners Wine Trail launches July 26 with special treats at a number of area spots including Bighorn, Expression, Frank Family, Hall, Honig, Judd’s Hill and others not normally open to the public. Spend the day doing that comestible thing and then end it with more comestibles as Judd’s Hill hosts an alfresco dinner at the end of it all on Sunday, July 26. 1pm to 6:30pm. $75 drinker; $35, designated. For info, go to www.jewishvintners.org and follow the links.