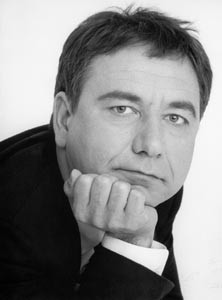 Will Rogers with fangs returns to the Mystic

WHATEVER else the historians end up saying about the year 2000, one thing is for damn sure: when we common folk weren’t crying or grimacing in disgust, we were laughing our butts off. It’s true. From Janet Reno’s outrageous Keystone Cop routine at the start of the year–remember the whole Elián Gonzalez affair?–to Al Gore’s revolving-door personality and George W. Bush’s valiant attempts to string three words together without hurting himself, to the never-ending Ping-Pong game of an election and all that scandalous talk of lost ballots and illegitimate chad pregnancies. . . hey, politics has never been funnier. Consequently, there’s never been a better time to be a political humorist.

Ask Will Durst. Possibly the funniest, and certainly the hardest-working, political humorist/standup comic today. Over the last year, the San Francisco-based Durst has been in constant demand, traveling the country from club to club, frequently appearing on CNN and Fox News to make wryly reasoned sense of the latest crazy governmental shenanigans–or at least to reassure us for being so confused.

“Yeah, I’ve had a very good year,” says Durst, calling from Austin, Texas. “I’m in the Belly of the Bush beast,” he boasts, about to conclude a lively weeklong engagement at the Capitol City Comedy Club.

“The whole Florida election mess is way cool. I thought my fun would end on November 8th, so this has all been gravy. Five weeks of gravy.”

Durst plans to serve up some of that gravy when he joins up with wife, Debi, and a cadre of friends for the third annual Big Fat Year-End Kiss-Off Comedy Show, an increasingly popular multivenue event that will land at the Mystic Theater in Petaluma on Wednesday, Dec. 27.

“It’s mostly a kind of company picnic,” he says of the free-form show that will include comics Johnny Steele, Deb & Mike, Steve Kravitz, Ken Sonkin, and the mythic Special Surprise Guest. “It’s always a blast. The whole reason we do it is to have fun, and we do have fun.”

The show is a mix of improv, standup, and wacky stunts, with Deb & Mike doing what Durst calls “their Siskel and Ebert routine,” and the motor-mouthed Johnny Steele doing, well, his Johnny Steele routine. And somewhere along the way, Durst will take the stage to put the year in some satisfying satirical context.

“I’ll even tell my horror story about how I screwed up on Who Wants to Be a Millionaire,” he teases, refusing to elaborate. He promises to also explain why George W. Bush reminds him of a stripper–“A stripper with hairy legs”–and to offer a few cogent observations about Gore.

“I believe everything Al Gore says,” he reveals, “until he says it.” Speaking of Gore, Durst does admit to being impressed with the way the VP handled himself during one incident on the campaign trail in New Hampshire.

“I saw the whole thing,” tells Durst. “Gore was in a crowd, holding this 2-year-old kid that somebody had handed to him, when the kid just throws his head back and falls over backward. But Gore had the kid’s legs, and he managed to get him upright again. He was so calm and cool. He never panicked. Can you imagine what would have happened if Gore had dropped the kid on his head? On the concrete? The campaign would have been over right then and there.”

Durst is similarly amused that Florida–“A state where people lose ballots and later find them under someone’s sink”–has been such a prominent player in the year 2000.

“The news this year has all been Florida,” he says. “We had Elián at the beginning and the election at the end. It’s like bookends.

“I think we’ll end up calling 2000 ‘The Year of the Penis,’ ” he goes on, “because Florida is the penis of America. Look at a map. Think about it. It’s hot, wet, and wrinkled. Personally, I think we should just circumcise Florida and kick it into the Caribbean.”

Bet the Texans loved that one.