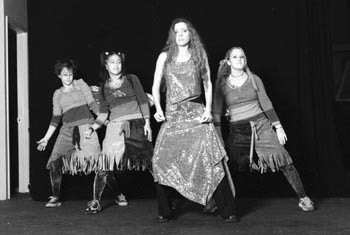 What the funk: The Cinderella story gets a new look in Glass Slipper Blues.

THE IDEA is as rich with possibilities as it is fraught with peril: Take the old-fashioned story of Cinderella and transform it into a funk musical with a feminist bent, complete with black lights, break dancing, and a playboy prince brought to heel.

One thing you knew going into Glass Slipper Blues, which recently finished playing to two weekends of packed houses at Kid Street Theatre in Santa Rosa, is that this production was likely to be either very, very good or very, very bad.

After all, few creatures in the theatrical world offer more potential for disaster than musicals, which need–among many other things–a cast that can both act and sing.

The cast of Glass Slipper Blues manages both feats, though it must be said that the voices are sometimes stronger than the dramatic talent. But the music itself may be the biggest star here, as you’ll be able to see for yourself if plans for a restaging early in the new year bear out.

You know the basic story–probably by heart. After the death of her beloved father, a mousy young woman seems destined to spend the rest of her life as an overworked domestic in her own house, toiling in the kitchen while her wicked stepsisters and cruel stepmother plot to catch a sugar daddy at the prince’s grand balls.

But Glass Slipper Blues has more than a few surprises in store.

With a face as lovely as her voice, Rose Logue is equally convincing as the timid little servant girl Rella and the bad-ass beauty she becomes after her fairy godmother (played by Nancy Pritchard, a talented singer with a fine sense of comic timing) answers her plea for help by “baptizing her into the nation of the funk.”

Rella’s first song, “Stay,” has an alarming Little Mermaid quality to it. But there’s nothing Disneyesque about her transformation into the hip-shaking, head-turning Funkarella, a pink-haired goddess who is unquestionably the “queen of the dance floor.”

Looking an awful lot like Cruella de Vil, Amy Rink out-evils Glenn Close as Gloria, the wicked stepmother. Her fine, full voice brought down the house during “Two Sides to Every Story,” in which she lovingly relates her black-hearted misdeeds to the audience.

After Funkarella gets her new look, she has to brave the perils of the outside world to make it to the ball, including a perverted singing sidewalk. Far more dangerous–and funnier–is a motorcycle-riding “wolf in wolf’s clothing” played with predatory relish by Mario DeGasperi.

Another standout in a minor role is the young Jessica Finn, a talented young dancer who has funky attitude to spare as one of the Fairy Godmother’s assistants.

Since this is not your father’s fairy tale, you might expect the royal love interest to be a bit less charming than Prince Charming. You’d be right. Played by Patrick Maloney (a Sonoma County musician who occasionally seems a bit uncomfortable as an actor), this royal playboy seems bent on bedding every fair maiden in the kingdom.

But his well-used golden boomerang, which he keeps tucked suggestively in the front of his pants, goes limp as a banana peel when he falls for Funkarella.

It’s not giving away too much to say that everything ends happily–though not without a few unexpected twists. The plot is reasonably compelling, though a little fat-trimming might be in order: it’s more than two hours before Funkarella and her prince hook up for good and “justice is served on a big silver platter” to the scheming stepsisters and stepmom.

This isn’t the first time Glass Slipper Blues has come to the stage–and it won’t be the last. Originally a collaboration between creator Bret Martin (who wrote the book) and musicians Manny Wolfe and Aaron Young, the production debuted last June at the Phoenix Theatre.

This time out, the team added Eileen Allen as director and Sarah Baker as musical director. Clearly evident in the new version is the touch of Baker, a multitalented blues musician who has polished the musical pieces here to a high shine.

According to Martin, a deal is now in the works to stage Glass Slipper Blues in San Francisco. There are also plans to restage it in Santa Rosa once Kid Street moves into its new home at the Lincoln Arts Center. But keep your eyes peeled, because wherever it pops up next, Glass Slipper Blues is likely to sell out faster than you can say “happily ever after.”