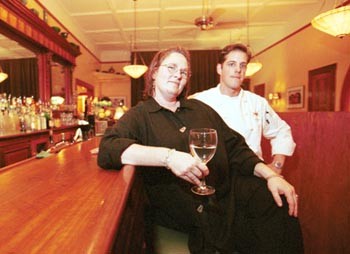 The Girl And the Fig

Girl and the Fig sprout anew in Sonoma

THREE YEARS ago restaurateur Sondra Bernstein created the Girl and the Fig in Glen Ellen, a restaurant that was determined to be different in several ways. First, there was the Rhône-oriented wine list, which eschewed the ever-popular cabs and chards, and instead featured viogniers, marsannes, syrahs, and mourvèdres, long before those became the trendy tipples they are today. The restaurant also offered flights of wines and ports, an artisan cheese menu and cheese-tasting bar, and a variety of dishes featuring Bernstein’s passion: figs in all their fleshy, chewy guises.

The Girl and the Fig enjoyed so much success that it has just expanded, moving out of its comfy digs in Glen Ellen’s gourmet gulch and settling into a new, more spacious home in the historic Sonoma Hotel on the town’s picturesque plaza.

It’s a move that may please some and infuriate others, but owner Bernstein vows to stick with her successful format.

“I suppose this decision [to relocate] may not please everyone, but wait and see!” she notes in the restaurant’s newsletter. “We are committed to re-creating ‘The Girl and the Fig’ in a more accessible location with all your favorites.”

The new space in the venerable old corner building, built in 1880, has been through many incarnations, most recently Heirloom Restaurant. The Girl and the Fig retains some of dining room’s elegant features, such as the huge, wonderfully preserved wooden and mirrored Italian bar (built in 1909), the ancient wooden floor, and the butterscotch-colored glass lamps hanging from the high ceiling.

Although the new setting is handsome and quite stately, with wood paneling, spaciousness, and full-length windows, some of the Girl and the Fig’s former cuteness is gone. I miss the old place’s country-bistro coziness, even those funky yellow and green fondue sets lining the upper shelves (maybe they are still working out the decor?).

But big afigcionados will still spy many familiar touches. The mismatched lemon-painted wooden chairs, silver fig paperweights, and papery long-stemmed crimson poppies on the tables are still intact, as are the Julie Higgins’ paintings of the voluptuous girl and her figs (although the art seems to be shown to less advantage in the larger space). Oh, and yes, the nailed-to-the-door Barbie and Ken dolls still quirkily grace the entrances to the men’s and women’s restrooms.

One note of concern is the skimpy tea-light candleholders on each table. We saw a a couple of candleholders tumble over during our visit, leaving the teal ight burning at an angle with wax pooling onto the butcher-block paper covering the table. More stable ones are definitely in order.

The restaurant’s wine list is still almost entirely Rhône-inspired, including some excellent flights for sampling.

What’s really different is the full bar–featuring French aperitifs and extended cheese and charcuterie platters–and the gorgeous patio out back.

The seasonally changing menu is still described as “country food with a French passion,” including, as always, several dishes containing figs in all their splendor. But is the food the same? Mostly, although we encountered a couple of hiccups. But to be fair, the chef is probably still settling into the new space.

A mushroom ragout ($10.95) is a taste treat. It features a hunk of Redwood Hill Camellia, a light and creamy cheese, melting with a tantalizing tang under a heap of sizzling garlicky sautéed wild mushrooms. Great with the crusty bread.

But a huge bowl of steamed mussels ($9.95) in a salty broth containing Pernod and chopped leeks, and served with two toasted baguette spears, is curiously blah. Too many mussels, not enough taste.

The signature fig salad ($9.95) is always a delight (although you should catch it earlier in the year when the figs are fresh-grilled and almost caramelly rather than the dried version served now). Still, the mouthwatering combination of arugula, figs, pecans, Laurel Chenel chèvre, pancetta, and fig and port wine vinaigrette makes this one of the loveliest salads around.

The low point of the meal is the lamb shank ($17.95). The plate contains a shrunken sinewy lamb shank–with no meat to speak of and a pile of very undercooked flageolet beans. The best parts are the glazed carrots and Brussels sprouts. Unusually disappointing overall.

But the ravioli ($16.95) is back to usual high standards. The pasta is beautifully presented in layers of eye-catching colors. The squares are filled with ricotta and spinach and layered with delicious chunks of roasted winter squash and wilted greens. It’s all fresh and rich and yummy.

Other entrée items include grilled pork chop in cider sage sauce with a Gravenstein apple-potato gratin ($16.95); calf’s liver in a Madeira mushroom sauce with mashed potatoes; and Arctic char, an unusual Canadian fish with a flavor like mild salmon, ($20.95), with French lentils and braised fennel.

With sugary smiles, the diners at the next table are exuberantly demolishing plates of puffy profiteroles, port and fig ice cream, and crème brûlées. We have room for just one dessert, but it’s a winner! Dubbed the “almost flourless chocolate cake,” it’s a dense sliver of fudgy heaven topped with clouds of fresh whipped cream and given extra distinction by two slivers of candied orange peel.

Service is well intended and professional, making this a very enjoyable excursion. Former Fig fans (and newbies alike) should definitely check out the new digs, which, after all, is just around 12 minutes away from the old place. Die-hard Glen Ellen supporters will have to wait till March, when Bernstein opens a new eatery–The Girl and the Gaucho-in the former space.