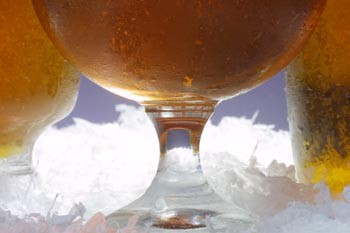 WINTER BEERS are a fairly new phenomenon stateside, but they have been a staple of European brewing for as long as beers have been brewed. Three distinct styles of winter brew are available to compare with the many domestic holiday brews. These beers raise the level of the art of beer making (and beer drinking) far beyond the ordinary to compare with fine wines.

Big, bold, and malty, English winter beers are probably the beer style that most people think of when they think of winter beer. J.W. Lees is a premium example of this style, with its strong, slightly sweet, and beautifully malty balance that is not only great for drinking now, but provides the strength of body necessary for laying down for several years like a fine wine. Taster and winemaker Rich Farnocchia states quite strongly, “Lay this one down next to your ’94 Cabernets.”

Fuller’s Old Winter Ale, a brew available on draft in many places throughout the Bay Area, is a truly classic winter ale with a perfect balance of malt and hops. If you take this brew and bottle-age it for a year (they did!), you wind up with Fuller’s Vintage Ale, a brew that perfectly exemplifies the quality, drinkability, and aging potential of high-end English ales. Fuller’s Vintage Ale–available in a beautiful red gift box–is the perfect example of English brewing art and a great gift for any real ale lover.

For two examples of the smoky style exemplified by Alaskan Smoked Porter, try Hecht Schlenferla Rauchbier and Special Rauchbier from Bamberg. Both of these brews, while slightly different in style, are big, round, smoke-filled brews that feel like sitting in front of a raging log fire while the snow pours down outside.

Three brews from Belgium provide interesting and unusual examples of holiday brewing that has been a Belgian tradition for hundreds of years.

Corsendonk Christmas contains a slight sweetness blended with the slightly sour note that is typical of the Belgian style of brewing. It is nicely balanced with a lingering finish.

With a gigantic flavor in a very light brew, N’ice Chouffe is an excellent example of what many of the lighter domestics are trying for without quite achieving it.

Finally, the pinnacle of Holiday beers, Scaldis Noël, comes in two sizes: a small bottle in brilliant blue wrapping that makes it look like a little Christmas present, and a large magnum size wrapped in red foil that grabs your full attention even before you pop the top. The smaller bottle provides a clean and bright flavor that one reviewer described as “savoring a fine cognac.” The magnum–an unfiltered version–is slightly sweeter and more malty than the small bottle. Both brews, more than any other available this season, reveal the true potential of the full reality of the brewer’s art.