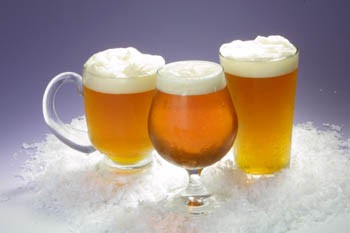 Hopping through the holidays

AS THE DAYS grow short and the nights grow long and the general population decks the halls and strolls the malls in search of holiday cheer, beer fans find another way to warm those cold winter hours, seeking out the proverbially perfect balance of malt and hops and spice that truly says Hoppy Holidays. As they have done in years past, a distinctive group of valiant beer nuts (not a formal designation) ventured into the fray last week at the Sonoma Wine Exchange on the Plaza in downtown Sonoma to provide you with a list of resources for your own party (public and private) planning.

This year’s selection of bottled winter brews is probably the most consistent since the microbrewing boom began nearly 20 years ago. For the most part, West Coast microbrews can’t compete with the age-old brews of Europe in consistency and character, but some of the beers at the top of the list definitely hold their own. To get a good sense of what’s out there this year, try several, or do your own tasting, and make your own judgments. I mean, what else are you gonna do on those cold nights, deck the malls?

As usual, the selections range far and wide, and even some of the losers in the tasting had their devotees. With the big winners listed first, here’s the list.

Anchor “Our Special Ale” Always at the top, this by now legendary brew always has lots of devotees (and usually a few strong dissenters). Too heady for some, too spicy for others, just exactly right for its many fans, Our Special Ale (the real name of “Anchor Christmas”) is Christmas to many people in the Bay Area. “Well balanced with great spice,” was what Dave Cohen, owner and winemaker of Moondance Cellars, had to say. This year’s brew is not quite as heavy as that of recent years perhaps in an attempt to win over those naysayers of years past. Anchor OSA is available almost everywhere in bottle and on draft.

Sierra Nevada Celebration Available in many locations in both bottle and draft forms, Sierra Celebration is one of the most beautifully defined and carefully perfected microbrew offerings of the season. If you get the chance, you really should try both. The draft version is crisp and clean, with the wintry lightness of an early morning above Lake Tahoe. The bottled version is a bit beefier, with an obvious hoppiness and a bit heavier malt profile that several tasters preferred over the draft version. Both versions of this brew are a golden amber color that really seems to add to the experience. Another superior brew from the always stellar Sierra Nevada brewery.

Lagunitas Lagunator “I’ll Be Bock” began several years ago as a fun attempt at a Solstice Ale from Petaluma’s Lagunitas Brewing and it won big at that year’s tasting. Well, it still pulls its weight since, as the label forthrightly declares, “no attempt has been made to futz with this recipe.” This is another brew that is available both on draft and in bottles throughout the Bay Area, and as with Sierra Celebration, beer heads should definitely avail themselves of the opportunity to taste both. The draft version has a brightness of flavor that is muted in the bottled version, but the bottle compensates with a little stronger hops character. A truly superior winter brew.

Third Street Barleywine From Santa Rosa we had a crack at last year’s Barleywine (the new one was not available at the time of our tasting) This beer tasted much as though it was approaching the classic slightly sour flavor of Belgian beers but didn’t quite get there (that can be a good or a bad thing, depending on your opinion of the Belgian style). Nicely balanced, Third Street Barleywine was very well received by the group. And if it is any indication of what’s on tap now (and it probably is), it would certainly be worth a trip to Third Street Aleworks to try out the new brew.

Pyramid Snow Cap With real dogs in past years, the folks at Pyramid have come up with a nicely balanced English-style beer. This is not the pinnacle of pyramid brew, but a fabulous improvement over previous years and a nice bottle of holiday ale to take home.

DeSchutes Jubelale Also showing a big improvement over past years DeSchutes (located in Bend, Ore.) brought in a nicely balanced brew with a cute skater label that was quite popular with several of the guys. As for the beer, it’s actually quite complex in character, with a malty body, good hop balance, and an extended finish. Again, not the best, but a darn good winter brew.

Alaskan Winter Ale and Alaskan Smoked Porter Two brews from Alaskan Brewing, both of them beautifully balanced with interesting and uncharacteristic flavors, were very well received by the panel. Alaskan Winter Ale is a nice slightly malty medium-bodied brown ale brewed with spruce tips (just like the beer served by Washington on that legendary Christmas night by the Delaware). The lighter body provides those who prefer less weighty beers something of holiday cheer, while at the same time giving ample room for the subtle spruce flavors to find their way through. On the heavier end, Alaskan Smoked Porter has always been a hit at the tasting, and this year was no exception. In years past there was a pronounced smoked-salmon flavor (something that many tasters loved but others found less engaging). This year there’s none of that fish flavor, and the smoky taste is a little lighter as well. It seems that Alaskan may be trying for a slightly wider market, and it works. A full-bodied dark beer with a strong smoky peat flavor, Alaskan Smoked Porter creates a marvelous balance that allows the smoke to come through without the drinker feeling as if he/she is standing in the middle of a campfire. This beer is one of the reasons to look forward to Christmas.

Moylan’s White Christmas Double IPA This is the beer to buy for all those hopheads on your Christmas list. A very nicely balanced IPA, with loads and loads of hop flavor but with a solid enough body behind it to hold all that flavor up, Moylan’s White Christmas is fantastic even if it is a little hard to figure out why they would call it a Christmas beer. . . . Perhaps it’s Christmas in Bombay–yeah, that’s it.

Moonlight Greenspan’s Tipple Sonoma County’s Moonlight Brewing offers up a new brew each year that is a sort of turbo-charged version of classic nonspiced bock-style Christmas brews. Originally called “Santa’s Tipple,” this annual holiday offering has made its way from last year’s “UPS Man’s Tipple” to this year’s economically hopeful “Greenspan’s Tipple.” Available only on draft (at the Sonoma Wine Exchange, San Francisco’s Toronado, and a few other multi-ap pubs), Greenspan’s Tipple is a brew that elicits holiday cheer–without the spices that have somehow become a requirement for most holiday ales–through a beautifully malted, carefully hopped balance.

And now for some of the losers:

Bridgeport Ebenezer A real Scrooge of a brew. OK, I know it’s a cheap shot (sorry, Chuck), but Bridgeport Brewing’s appropriately named Ebenezer was thin and bitter, lacking any kindness or good cheer, just like its literary counterpart. Several of the members of the tasting panel noted pronounced pineapple flavors (Christmas Island perhaps?). Bearing a slightly fruity nose and sour taste, Ebenezer lacked both the body and the fullness of flavor necessary to be considered a quality holiday brew. Skip it.

Marin Hoppy Holidaze This beer started out as a nice light approach to spiced beers but has somehow lost its way. Overloaded with spices but light on body, it was described by tasters as both “flabby” and with the distinctive label “zzzzzzzzz.” It could be good for those wishing to sleep through Christmas (it also might work for your Coors-drinking friends).

Marin Harvest Ale MBC’s other winter offering also leaves much to be desired. Described as “water & hops,” it did not carry the malty body and, like Hoppy Holidaze, dumped spice at you in place of true beer flavor.

Portland Brewing’s Bobby Dazzler Another light beer, this offering is described on the label as “Old London Style,” and in a way that’s true. The tradition of lighter “winter warmers’ is in fact an English tradition, but, frankly, Bobby Dazzler doesn’t make it on that front either. If you’re looking for a lighter holiday brew for friends who may be less than enthusiastic about the over-the-top taste of something like Anchor or Alaskan Smoked Porter, hand them an Alaskan Winter or even a Hoppy Holidaze. Send Bobby back to Oregon.

Full Sail Wassail The Flying Dutchman of the Full Sail brewing fleet. Described as “flat and funky” by winemaker Dave Cohen, the beer is thin, bitter, and unbalanced, its composition too light for a holiday ale and too oddly unbalanced to please even the light beer drinkers. Sail away; this is another one to skip.

Booneville Winter Solstice The ringer of the holiday offerings. It is a very odd beer. Winemaker Dave Homewood summed up most of the comments when he remarked succinctly, “I like cream soda.” Also described as a dreamsicle with a kick, owing to its heavy vanilla accent, this Anderson Valley brew is very light of body and without any distinct hoppiness at all. Buy a few bottles to pawn off on the folks who show up at your party asking for Bud Light, but otherwise look to some of the other beers on the list for true holiday cheer.