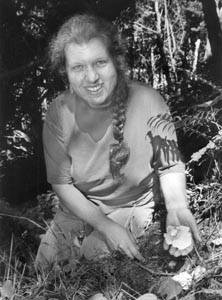 A quick-and-dirty guide to the velvet underground

THE SUN AT Salt Point State Park is strong. Even the cool air in the coastal woods has a toasted resin smell to it. But Pete Petersen, my contact at the Sonoma County Mycological Association and the planner of the day’s expedition 20 miles north of Bodega Bay, assures me that there already have been mushroom sightings here this season, so we may get lucky. Pete’s been ‘shrooming for 35 years, so I’ll follow his lead any day.

The rest of the party–Sue Davidson, Elissa Rubin-Mahon, and Elissa’s 13-year-old daughter, Ariel Mahon, all members of SOMA–are ready for the hunt, with wicker baskets, rusty knives, and well-worn guidebooks. And they are enthusiastic, even though their predictions have been dire about the likelihood of finding anything today.

“It’s very dry, much drier than last year,” says Elissa, who has been hunting mushrooms since 1981. “Last year was a really early year, and the mushrooms were abundant. This season at the places I was finding pounds of mushrooms last year, I’ve only found one very small one.”

This particular spot, known to generations of Russian- and Italian-Americans as a jackpot for succulent porcini and chanterelles, is seeing increased traffic as other hunting grounds closer to cities have been covered up by housing developments. “It takes generations of growth before boletes [porcini] and chanterelles come up,” Elissa says. “If you wipe out an area, they usually doesn’t come back for a while.”

Which is not to say that you need to travel to pristine wilderness to find good ‘shrooms. “I have a spot in my neighborhood that I check out now every year,” chirps Sue, a cheery older woman who looks as though she might teach home-ec when she’s not crawling around in the woods.

“Yeah, we have chanterelles that come up not too far from us in the winter,” Elissa answers absentmindedly from the little hollow to which she had made a beeline. She pulls up a stack of pine needles and lets out the first call of the day: “I found some!”

The creamy yellow lumps emerge under Elissa’s careful fingers. “They’re a little dry,” she says, “but they’re not old.” She cuts the two blooms free and hands the mushrooms over to Pete, who holds them up to my nose. They give off a faint apricot smell, overlaid by an irresistible aroma of dusty old velvet, and the pale skin darkens with exposure and handling to a burnished gold. Everyone is tangibly excited by this first find. “There’s a happiness in going out to the woods, hunting stuff,” Pete explains. “It goes back to when we were hunters and gatherers thousands and thousands of years ago.”

Sue nods her head vigorously. “You’re hardwired to do it. It feels really natural.”

AFTER THE THRILL wears off a bit, Sue and Ariel head off down the gully, while Elissa pares the stems clean. “Part of mushrooming is intuition,” she says matter-of-factly, scraping the tender flesh with casually perfect strokes. “I almost get a feeling in the pit, in the solar plexus, that something’s starting to happen, and I’ll come and look.”

Another part of mushrooming is, of course, practice, which is where SOMA comes to the rescue with frequent outings and workshops for dedicated seekers and curious members of the public alike. To ward off any mycological misadventures–every rainy season seems to bring on a small but well-publicized crop of ill-informed individuals in need of mushroom-related liver transplants–SOMA hosts a mushroom fair every winter, with mycologists on hand to indentify fungi, and the group sponsors a year-round helpline. Accessible through directory information, the recording gives contact numbers for some of SOMA’s senior members, outlines emergency procedures for bad- or worst-case scenarios, and reiterates the mushroom novice’s mantra: Don’t eat it until a pro says you can.

The pros on hand know exactly what we’re looking for. Elissa resumes her intent scrabbling around the pine trees, while Pete demonstrates the finer points of mushroom structure to the fascinated Independent photographer. I catch up with Ariel, who seems a precocious youngster indeed. Latin terms spring from her lips with unstudied ease, interspersed with gossip about other mushroom hunters and enthusiastic tales of her outings with mom. Ariel has been mushrooming since the age of 4. Sheesh.

I’m never going to catch up.

AS WE CLAMBER around the side of the ravine, the two older women exchange sites and recipes for their favorite fungi. We have covered a swath of hillside a couple of hundred feet long, and still I have found nothing.

I ask Elissa to come with me to the other side of the glen. By now, the bottom of her basket is thickly covered with chanterelles, and I harbor a vague hope of her mushroom magnetism rubbing off on me.

Then I look down at the base of a tree not 25 feet from the parking lot and see a glint of blonde in the dark forest floor. “Hey,” I call out weakly, the excitement mounting in my chest, “is this one?” The others come quickly, and Pete kneels down next to me for a closer look. Yes, it is a chanterelle. Grinning like an idiot, I wrap it proudly in paper towel and put it in Pete’s basket.

Back at the parking lot, my head fills with visions of a future full of wild, flavorful fungi. I could do this–a lot. But the logistics of mushroom hunting are daunting. Mushroomers can be secretive about disclosing their favorite spots–this group asked me to avoid naming the specific site that we’re hunting in–and in any case, only three public parks in Sonoma County are open for gathering: Salt Point, Tomales Bay, and Samuel P. Taylor.

“Basically you need to find people who own private property,” says Pete.

“We’re really trying to work toward getting all of the state parks open,” adds Elissa. “Right now, they’re saying, oh, there’s too much pressure, there’re too many people picking here. Our belief is that if they opened everything up they would spread the activity out.”

Potentially that leaves the gate wide open for commercial harvesters–who can pick up $2-$7 cash for a pound of chanterelles–for whom this particular group of mushroomers has a certain disdain. “The commercial pickers travel in caravans,” says Elissa. “They start in the summer in Alaska, in trailers and vans, and they work their way down. They’re not supposed to do it here. But I’ve seen at the north end of the park when bolete season is upon us, 20 or 30 vans of people.

“You know they’re out there doing it.”

Nods and murmurs from the others accompany Elissa’s complaint, but the conversation eventually turns back to recipes for the chanterelles in hand (general consensus calls for a quick sauté in butter).

It’s hard to stay worked up about porcini poachers after exercising one’s hunter-gatherer instincts, which are probably, as Ariel suggests, closer to the stomach than to the brain.

SOMA meets on the third Thursday of the month, from September through May, at 7 p.m. at the Sonoma County Farm Bureau (970 Piner Road, Santa Rosa). Membership is $15 per household. The mushroom hotline is 833-1097.