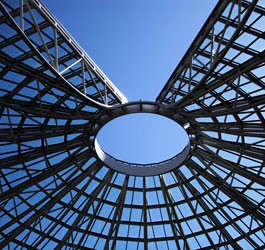 For climate and life protection, dress roofs in white. Seven hundred heat-related deaths in the 1995 Chicago heat wave may have been prevented by white-roofed buildings, according to physicists at Lawrence Berkeley National Laboratory. Famous among these scientists is Art Rosenfeld, who helped present the winning statistics now persuading cities all over the world to require light roofing materials in building codes.

Rosenfeld explained to a Berkeley audience last fall that dark materials absorb and hold heat, and that a nonreflective roof captures heat and transfers it to the entire building, increasing temperatures up to 50 degrees (!). Of the 737 Chicago heat-wave deaths, 700 were residents of upper floors in buildings with no air conditioning and dark roofs.

Climate scientists have long known that light-colored surfaces bounce sunlight back and dark surfaces trap light and store heat, forcing temperatures up. But Rosenfeld observed that this fact was not altering roofing codes; so he and others calculated dark-surface damages in terms of C02 rather than temperature, and got the world’s attention.

“Carbon dioxide [not temperature] has a price on the market,” Rosenfeld explained. Last year, it was about $250 per ton. “So we calculated that an average-sized house contributes 10 tons of C02 per year. Multiply by about 3 billion, because there are about that many roofs, and [by making roofs reflective] you would avoid the heating effect of 25 billion tons of C02. That’s over the life of the roof—about 20 years. It would be the equivalent of turning off the entire world for a month or taking 300 million cars off the road for 20 years.”

In 2005, California’s Title 24 building codes required that modified flat roofs be white, and in 2008 updated codes required the same for all sloped residential roofs visible from the street in the five hottest zones (the state has 16 “building climate zones”). The codes in 2012 are expected to be even tighter. (Opponents to white-roof codes might be consoled by the fact that light colored roofs and roads last longer and are cost-saving in addition to cooling.)

So far only Arizona, Georgia and Florida have followed California’s lead. But through an organization spearheaded by Rosenfeld and his colleagues, the world’s urban centers elsewhere around the globe (all urban roofs, collectively, would cover an area the size of California) have taken action via www.whiteroofalliance.com.

Actions to take at home include lightening roofs and paved surfaces, and planting trees.