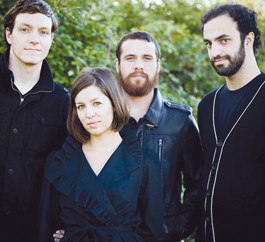 What Is Music For?

Not to Reason Why tackle the big question

The first time I saw Not to Reason Why, in 2007, they made my teeth hurt. It’s only gotten worse in the last two years. I’ve seen them in warehouses, in theaters, in living rooms and in barns, and their effect is always physical, centered at various body parts with fierce vibration. One area is always spared the jabbing effect of their orchestrated apocalypse, however, and instead filled with calm: the brain.

What is music for? It seemed only suitable to lob the most long-sweeping and epic question about music to the members of a long-sweeping and epic band. Not to Reason Why, who take their name from a roadside flower stand in Cotati, play condensed, opulent, distorted instrumental rock, sometimes with multiple drummers and always with piano. With the exception of guitarist Ian Simpson, who admires house parties and beer, they lead decidedly un&–rock ‘n’ roll lifestyles.

Bassist Navid Manoochehri is passionate about fine food and works at Thomas Keller’s Ad Hoc restaurant in Yountville; drummer and pianist Paul and Lauren Haile are newlyweds who like going to church and memorizing classical compositions by ear. The last time I saw the band, they ended their set by slowly rising from their instruments, gathering in a semicircle, and singing a reverent, four-part Renaissance-style solfège chorus.

What is music for? Escapism and communication, says drummer Paul Haile. “There is so much that music can do, and I feel like there is almost a type of music for every sort of situation you may come across in life. But a short answer to your question is that music is something that we do to escape reality. Something everyone can be individually passionate about, and really, a way to relate to other humans’ creative expression.”

What is music for? Construction and synchronicity, says Manoochehri, who once fronted his own band Allez-Cuisine, named after a recurring command on the television show Iron Chef. Taking a semi-scientific route, he says, “I think music is the ultimate form of self-expression, because it requires both the left and right sides of the brain to work in tandem to create one final, emotive product.”

What is music for? Beautiful numbness, offers Simpson, who racked his brain, before replying, “Iggy Pop said it better than I could ever say it: ‘Music is so powerful that’s it quite beyond my control, and when I’m in the grips of it, I don’t feel pleasure and I don’t feel pain. I just feel pure emotion.’ That’s exactly how I feel. The majority of our sets, I black out in the middle of them. I don’t know why it happens.”

Not to Reason Why have a new record out, Would You Hug Fire?, an invigorating set that, unlike their loud live shows, spares every body part. Musically, it can sit comfortably alongside evergreens such as Explosions in the Sky’s The Earth Is Not a Cold Dead Place or Mogwai’s Rock Action in the modern instrumental-rock canon.

Emotionally, the band has dedicated it to Phoebe Washer, the 20-year-old Petaluma artist who tragically died from a 2008 fall in the Marin Headlands; two songs, “Give” and “Her,” were written specifically in her remembrance. Artistically, Washer’s art is included in an elegant full-color portfolio of individual prints by local artists and photographers in the deluxe vinyl edition of the album, a defiant packaging that goes against the cold, digital age.

After two albums, two years of playing constantly and several short tours, Not to Reason Why have entered that realm of local bands more than deserving of the headlining record-release show. What is music for? On the first day of the New Year, find out for yourself.