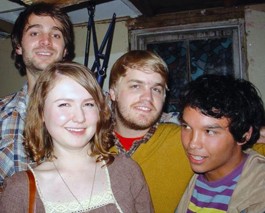 The Big O is a band from Cotati who instead of crediting Weezer as in influence—no doubt unable to hold back barfing at the thought of the band’s last few albums—simply cite “the Blue Album and Pinkerton.” Everyone knows that “the Blue Album and Pinkerton” means the good Weezer, before Matt Sharp left and it all went to novelty-rock hell where Rivers Cuomo is Satan and his fans are perpetual adolescents doomed to an eternity of tongue-in-cheek chuckles that got old 10 million years ago. To distance oneself from such a cynical posturing of post-post-irony is a good thing, and genuineness is a part of the Big O’s honest, unpretentious songs, which remind me of the band Girls, from San Francisco, or more loosely, the Velvet Underground. Jangly guitars support the well-constructed but weary-sounding melodies, sung as if up one too many late nights: “Turn around, love is really happening / You should know, I told you it would start again.” These are simple words that flashy, dressed-up arena-rock bands don’t sing anymore, and it makes sense that the Big O sing them in garages and living rooms over cheap beers and bad PAs.

The Big O play this weekend with Mumble Mumble (above), a young band from Oakland whose members weren’t born when the Fastbacks started rehearsing in 1979 but who capture the same melodic thrust of carefree optimism in female-vocal-driven songs like “Wow, It’s Summer.” Plenty of post-Gen-Xers have taken lately to the guilty pleasures of cornball ’90s groups like Ace of Base and Naughty by Nature for amusement; few, if any, make waves by capturing what was truly good about the millennium’s final decade. Raise a toast to the Big O and Mumble Mumble, and their inadvertent crusade, when the two bands share a “Christmas Hangover” bill on Saturday, Dec. 26, at the Black Cat. 10056 Main St., Penngrove. 10pm. Free. 707.793.9480.