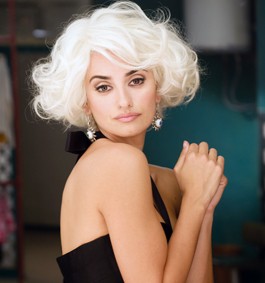 A sleek, twisty mystery, illuminated by the stunning Penélope Cruz, the new Pedro Almodóvar is also a sprawler. The James M. Cain&–style plot elements involve a blind film director from Madrid, most active in the 1990s (the balding but virile Lluís Homar). After losing his sight, the filmmaker took the ballsy new name “Harry Caine” and became a writer. Caine is doted on by Judit (Blanca Portillo), a mannish female assistant with whom he has some kind of past. News of the death of a corrupt tycoon sends Caine back to confront unfinished business, to retrieve the moment 16 years previously where he lost both love and sight.

Broken Embraces‘ well-engineered reveries over classic film are heightened by Almodóvar’s seriocomic additions. The dead tycoon in question, a cuckolded millionaire named Ernesto Martel (José Luis Gómez), is apparently modeled on Everett Sloan in The Lady from Shanghai. This dangerous man is a collector of pop art, and so his dining room is full of giant Warholesque canvases portraying rifles and guns. In a joke The Simpsons should steal for Mr. Burns, he has a framed portrait of one of his pet Dobermans on the window behind his desk.

Martel is also the producer of the last film Caine made. And the wealthy man unwillingly shared the love of Caine’s life, Lena, known as Magdalena, an actress, secretary and part-time prostitute, who took as her working-girl name Severine (a nod to Belle du Jour).

She, of course, is played by Penélope Cruz. No one but Almodóvar knows how to really make Cruz fascinating. She acts out a regular scene we used to see in ’60s movies, an auditioning actress trying on wigs, and we get to see this woman’s modes of glamour. Here is the frailty of Audrey Hepburn, the curves of Sophia Loren; in a turned-headed reveal, like that famous moment in Gilda, Cruz blazes the too-incandescent smile of Rita Hayworth. Capped with a tousled platinum wig, Cruz has something of Lana Turner in her mankiller parts. The spirits summoned up here aren’t travestied; they’re worshipped.

It’s odd that Cruz can be so really astonishingly beautiful and at the same time so asymmetrical. The liquid eyes don’t quite match, and the nose and mouth are oversized for such a tiny face and chin. When she tilts her head forward, you’ve got a Picasso. This wigging sequence can’t explain Cruz’s mystery; maybe it explains all the conventionally beautiful actresses who don’t have what she has.

Do we feel for Lena? It’s all a bit too stylized for that. She’s such an imago it’s hard to think of her as a character, despite the moments of love, anger and regret Cruz acts out.

In the press notes, Almodóvar comments about the last shot before Broken Embraces‘ coda. In it, a viewer reaches into the blurred, scrambled pixels of a video screen, trying to touch the untouchable past. Almodóvar says this is his way of dealing with the new methods for film watching: “I don’t want to be nostalgic. I’m willing to embrace the new techniques.” But what this image says is that even if one possesses a good home video library—with some of the films cited here, copies of Vertigo, Blow Up, Peeping Tom or a bootleg of 1954’s Voyage in Italy— it doesn’t get you closer to the essential intangibility of cinema.

A strangely feel-good ending recreates Almodóvar’s most internationally famous days in the 1980s. Having just hit age 60, the Spanish director seems to have gone valedictorian. Something comes along like Avatar or Transformers 2, and the world trumpets it as a new stage of cinema. If cinema means, in your estimation, something 90 minutes long with three-point lighting, starring a couple of actors hugging and kissing, and with a gold-wreathed lion roaring at the beginning, all that inescapable hype about the new is depressing. Imagine how depressed you’d be if you were one dedicated classicist of a film director, and suddenly Almodóvar’s act of raving cinephilia makes all the more sense.

He doesn’t seem to be completely losing himself in the past; he gives us some warm scenes of the enthusiasm of an old writer and a young writer brainstorming on the delightfully ridiculous plot for a modern vampire movie. But the way Broken Embraces splinters into such an array of memories, references and cul de sacs, it’s almost post the postmodern.