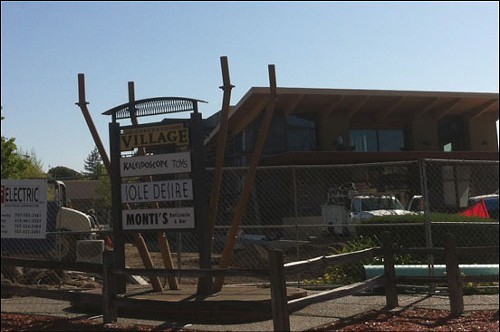 What Happened to the Covered Wagon at Montgomery Village?

A covered wagon’s sudden disappearance might not be news in other cities. But in Santa Rosa, it nearly stops traffic.

That’s what Santa Rosa residents discovered today, upon seeing that the iconic covered wagon, which for over 50 years has stood watch at Montgomery Village on the corner of Farmers Lane and Montgomery Drive, has been taken down.

I drove by Montgomery Village this morning, wondering why cars were moving so slowly. But as I got closer and noticed the wagon gone, I wasn’t the only one craning my head out the window to stare at the empty space. The wagon had been there my whole life. What happened to it?

The wagon was taken down yesterday, and it’ll be given to Cattlemen’s to use at one of their restaurants. But that’s not why the wagon was taken down. To hear Codding tell it, during the remodeling process of the northwest quadrant of the shopping center, Santa Rosa’s Design Review Board had told him to get rid of the wagon.

“They said, ‘We like the building and what not, we’ll approve the building,’” Codding told me today, “’but we want that wagon gone. It just looks ridiculous.’”

I knew Codding had some disputes with the city over his initial remodeling plan (disputes with city planners run in his blood, after all) so I wondered if this was all just residual sour grapes. But I called the architect on the job, Warren Hedgpeth, and another planner at city hall. Both confirmed that the city encouraged the wagon’s removal.

To longtime locals, hearing that the City of Santa Rosa wanted a landmark like the Montgomery Village wagon taken down is downright crazy. But here’s something to consider: the wagon that was taken down yesterday isn’t the original, historic wagon. It’s a replica. The original one was moved to the corner of Patio Court and Farmers Lane years ago—where it still stands, and where Codding says it’ll stay.

It took moving the wagon to show Codding just how much people cared about it. After he took over Montgomery Village and moved the wagon three blocks south, he got so many complaints from residents that he hired some Amish workers—“back in Utah or someplace”—to build another one for the corner at Montgomery Drive and Farmers Lane.

As for the future of that now-empty corner, a landscaped plaza is planned. Several bronze statues will depict children holding an American flag and, also, children feeding deer, Codding says. A sign telling the story of Montgomery Village will be set in a rock wall, with bas relief plaques of both Hugh Codding and village namesake Billy Montgomery, who was the first person from Santa Rosa to be killed in WWII.

The original, larger wagon has a special significance: it was a gift to Hugh Codding in the mid-1950s from Hollywood actor Fred MacMurray. As Codding says, “He called up dad and said, ‘You know, what you need at Montgomery Village is a covered wagon. I have a covered wagon at my ranch that would just be perfect.’ And Dad said, ‘That’s a great idea.’”

Here’s how the wagon looked in 1962, courtesy of the Sonoma County Library History Annex. Note the payphone and corner mailbox, things you don’t see much anymore, as well as the lack of sidewalks. (Zoom in and you’ll see signs for Hal’s Toyville, Eisenhood’s Deli and the Maple Shop… anyone remember these places?)

The original wagon has been through a lot over the years. Once, when maintenance workers were repainting it, they found arrows with charred tips inside. “I think kids, at night, they’d go and they’d pour gasoline on an arrow and shoot it at the wagon, trying to burn it down,” says Codding. “I heard another report that another kid, or group of kids, tried to put a detonation device in it, with wires—and it malfunctioned, obviously.”

Of course, what everyone really wants to know is: has anyone ever managed to climb up inside the wagon? “Yeah, I think some kids have climbed up into that wagon,” Codding laughs, “and God knows what they were doing up there.”