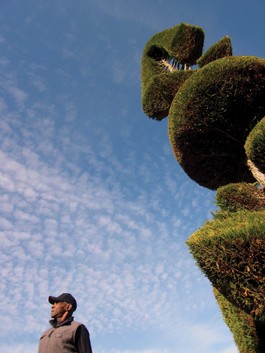 If this year’s movie-going “To Do” list contains only one documentary on an unusually named self-taught African-America topiary artist of retirement age from a small-town in South Carolina, it should be A Man Named Pearl. No contest.

And not just because there is only one such documentary. More to the point, A Man Named Pearl has no competition because it is not, by nature, competitive. This isn’t a film that was made to be sold. It was made simply to be seen.

In that regard, as compared with so much highly packaged nonfiction moviemaking on display in theaters today, Scott Galloway and Brent Pierson’s film is commendably unsophisticated—an antidote, almost, to the increasingly ubiquitous sort of “important” documentary whose only narrative energy comes from empty-calorie production values meant to mask tedious talking-head statements of the obvious.

Very little about Pearl Fryar is obvious. But don’t think that makes him coy or otherwise disagreeable. A sharecropper’s son in a town where mechanized farming wiped out nearly the whole labor force in one fell swoop, Fryar is the kind of man who will work 12-hour days in a can factory, then come home and get right to his gardening—trimming and sculpting trees and shrubs into curvaceous, vaguely Seussian abstractions well into the wee hours while his family and friends quietly worry that he’s lost his marbles.

That is, until they realize that he’s found his calling. As A Man Named Pearl nonchalantly but very effectively makes clear, Fryar has a unique aptitude for topiary invention. “You shouldn’t be able to do that,” more officially experienced plant handlers used to tell him. “I didn’t know that,” he now says. “One time in my life, ignorance paid off!” Literally, in fact: Fryar has become a one-man magnet for his town’s much-needed tourist dollars.

When Fryar first tried to buy a house in an all-white neighborhood down there in Bishopville, the reflexively racist neighbors worried that he wouldn’t bother to keep up his yard. So he moved to another part of town, and eventually became the first black man to win the community’s coveted Yard of the Month award. What’s so endearing about A Man Named Pearl is its way of not ever actually coming out and saying that he really showed those assholes.

And, yes, the man himself is plenty endearing, too. These days, the prevailing attitude toward Pearl Fryar is one of adoration. Friends appreciate his firm, working-man’s handshake. Students at the nearby community college art department find his DIY discipline inspiring. The manager at the local Waffle House lets him have breakfast there for free (Fryar’s landscaping efforts did much to enliven the parking lot).

Tourists see what they want to—Japanese garden motifs, totemic African sculptures—in the shapely, leafy forms he renders, and Red Hat Society ladies enjoy stealing glances at his own shapely, labor-toned form. (For the record, he is happily married; as his supportive wife recalls, “We might as well go get the blood test” was Fryar’s wedding proposal.)

Even the trees seem glad to know him: something in the caressing cut from Fryar’s hand tends to bring out the true and various nature of nature. His modestly straightforward but forceful artistic ambition always has been to create outdoor spaces in which, as he puts it, “When you walked through, you felt differently than when you started.” And his success cannot be denied.

A Man Named Pearl has a little trouble prioritizing its narrative nuts and bolts, but its thematic concerns—for a singular sort of ecological sensitivity, an exercise of casual portraiture—are elegantly expressed.

Galloway and Pierson wax just philosophical enough to let in a soft breeze of poignant irony: that the literal fertility of Fryar’s medium works directly against the possibility of artistic permanence. Unless he keeps after them with his saws and shears, each of his works will grow apart from him. And once he’s gone, without exception, so, too, will they be. That’s something worth documenting.