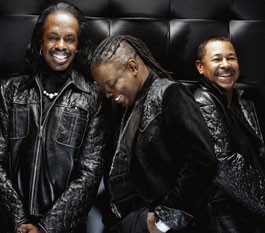 Way of the World

Earth, Wind & Fire give the people what they want

“I have to tell you honestly,” says Earth, Wind & Fire percussionist Ralph Johnson, “we don’t have a sense of urgency about putting out new material.”

This was evident in an article in Billboard last year, when singer Philip Bailey mentioned that the lite-funk juggernaut was planning a three-CD set with new and live material. But the mid-2009 target date for releasing the package came and went, and now that Earth, Wind & Fire are busy touring, Johnson says fans shouldn’t hold their breath waiting for the project.

“We’re always entertaining the thought of doing a new record,” Johnson insists in a phone interview. “The thing is, when people come to see our show, they don’t care about new material. They want to hear the stuff they grew up on. It’s not like we’re trying to establish our career.”

Johnson raises a valid point about where Earth Wind & Fire’s career stands. Formed in 1969 by Maurice White, the group made its breakthrough in 1974 with the album That’s The Way of the World, featuring the hit “Shining Star.” Over the next eight years, Earth, Wind & Fire reeled off a steady string of platinum albums (Gratitude, Spirit, Raise) and a basketful of slam-dunk hit singles before taking a hiatus from 1983 to 1987. By that time, the group had scored enough hits to ensure a viable concert draw for the duration of their career. They appear May 22 at Sonoma Jazz +.

Hits from the ’70s continue to form the bulk of Earth Wind & Fire’s live show. But these days, Johnson admits, the band can no longer afford to stage the visually spectacular concerts it did in the ’70s and early ’80s with pyrotechnics and lasers. “We’ve toned it down considerably, and now we’re really trying to give you more the personalities within the group and within the music,” Johnson says. “We’re not so much about what we used to call the ‘whiz-bang.'”