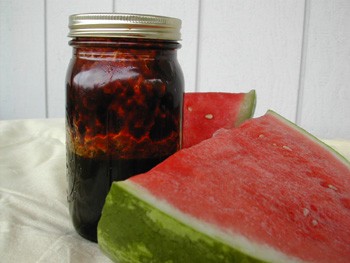 The Mysteries of Watermelon: Not exactly pretty to look at and not exactly obvious in its uses, watermelon molasses is a relic of church-basement recipes.

The mysteries of watermelon molasses, revealed. Sort of.

Watermelons are an icon of summer: the sitting out on doorsteps, the spitting of seeds into the thick summer air, and the slicing of cool, pink wedges for picnics and backyard cookouts.

Watermelon is not a condiment, nor a pantry staple–unless it is in molasses form, which not many people know about. This story tells why.

At a used book sale last summer I found an old self-published cookbook–Our Favorite Recipes, Compiled by the Friendly Aid Society of Free Evangelical Lutheran Cross Church, Fresno, California–whose 112 hand-typed pages had lain as a time capsule, now revealing recipes for things like leftover meat casserole, orange cheese salad, and mystery pudding. The cookbook itself is not that old, published in 1979; by that time, the majority of its luncheon jello salads and offbeat casseroles were already growing dated.

I became fascinated with this cookbook, which was initially unremarkable when compared to its plentiful spiral-bound kin–decades-old welfare-league, church-group, and investment-club cookbooks are hardly a rarity. But this one was different. It had typical recipes: classic “gimmick” cakes that feature mayonnaise or canned fruit cocktail as secret ingredients, and “international” casseroles from enchiladas to lasagna to Hong Kong pork chops, all requiring the addition of a can of cream of mushroom soup.

Beyond these charming throwbacks, though, were instructions for preparing some kind of fried pasties called grebbles (no fewer than six variations), savory dumplings called hava glase and merva glase, and berrocks (yeasted buns stuffed with ground beef and cabbage). The cookbook bothered with few explanations. Many times, half of the method would be missing, as if it was assumed the cookbook’s audience would instinctually know how to fry the batter for spatza grebbles.

The strangest discovery of all was watermelon molasses. Three coffee cake recipes called for its inclusion. Watermelon molasses? Where does one get such a thing, what on earth does it taste like, and why was an entire congregation of Lutheran women in Fresno putting it in their coffee cakes?

Combing through cookbooks of all ages and cuisines, no mention of watermelon syrup or molasses came up–not in The Fannie Farmer Cookbook, not in Larousse Gastronomique, not in The Joy of Cooking, not in any one of the dozen-plus Time-Life Foods of the World series.

Even the Internet yielded no insights, save a mention on the Watermelon Growers Association site stating that during the Civil War, people would boil down watermelon juice to use as a sweetener.

The whole concept sounded like something straight out of a Laura Ingalls Wilder book, with Ma boiling down gallons of watermelon in a cauldron over a fire so they’d be able to make cakes and sweeten their coffee when they couldn’t splurge on white sugar.

Our Favorite Recipes did contain directions for making watermelon molasses at home. Making it myself would be the only way to get to the bottom of the mystery. I felt it my duty as an amateur food historian to bring watermelon molasses back into culinary circulation, like it would suddenly become a hip, new ingredient for cutting-edge chefs to drizzle over foie gras.

Melons at Safeway were on sale for 59 cents a pound. I bought four. The cookbook said to mash the watermelon through a colander and then strain it into pots. This sounded a bit too old-world, so I roughly broke up huge chunks of blushing watermelon flesh with my hands and dumped it in batches into the blender, which I pulsed a few times before pushing the sludge through a strainer.

By the end of the hour and a half it took me to massacre four melons, the smell was overwhelming–a flash of memories smearing two and a half lost decades of sunburns, cutoff shorts, scabs on knees, firecrackers, and suntan lotion.

Watermelon, its flesh so wet and dense, bleeds and squirts upon every surface possible. The cabinets and walls were splattered with a rosy Jackson Pollock rip-off, and in the sunken pockets of our sagging kitchen counter were shallow, pink ponds floating black-seed canoes.

The book said to boil the juice down for seven hours, by which time I had just about finished cleaning up the kitchen. Perfect.

The two stockpots on the stove began with watery, translucent contents whose crest of foam was not unlike frappé. Tiny flecks of pulp dotted the surface. Just after the juice first reached a boil, it took on the deep orange hue of carrots and smelled undeniably vegetal. The evaporation from the stockpots hung balmy in the air, dampening the handrail on the stairway and rendering the kitchen an indoor jungle.

As the liquid reduced, its orange-rust color blossomed into a deep maroon, as saturated as Rit dye. It became opaque but no thicker, until it was just inches from the bottom of the pot; then, its simmering shifted from loose and rolling to sluggish and gurgling, bubbling densely like an alien caramel. It looked like runny strawberry jam–hardly the glossy-smooth mahogany molasses clone I had anticipated.

Once cooled and in the jar (a one-quart yield exactly), the stuff had the purple-red depth of a massive garnet. The stink of the whole operation still clung to the air, a puzzling approximation of the invisible cloud of scent a big field of squash, beans, and tomatoes give off when baking in the August sun.

The watermelon molasses confounded me. It was highly sweet and didn’t taste or smell of watermelon but of overcooked monster patty-pan squash. I made two of the coffee cakes from the cookbook, one yeasted and the other a quick bread. Their sweetness was subtle and their crumb was tinted the merest hint of ruby flush. The influence of watermelon was difficult to discern.

Ultimately, the vexing contents of the jar remain undisturbed on the highest shelf, only occasionally used or pondered–hardly the enlightening culinary discovery I was yearning for. I’ve come to appreciate the watermelon molasses’ confoundingly unfruity aromas and complex, otherworldly undertones in savory foods that beg for a kick of sweetness without the harshness of sugar. A tablespoon or two is nice in vinaigrettes, and a few random soups and barbecue sauces have been mellowed by its touch. But I see, smell, and taste the watermelon molasses on its own, and I wonder: Did I do something wrong?

Is watermelon molasses worth spending an entire day mutilating a stack of watermelons just to obtain this questionable nectar? Maybe if you’re Thomas Keller or one of his French Laundry externs, where watermelon molasses could meet its ideal application in a watermelon reduction sorbet or the vehicle for a pink peppercorn glaze on broiled quail.

But 10 years from now, when my quart jar finally runs out, you won’t find me boiling down any more batches. Not unless any of Fresno’s aging Lutheran community happen to be around. Then we’ll talk.