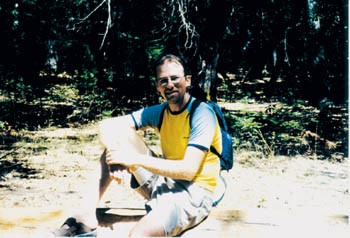 How does 25 years translate into human time?

The Bohemian, at 25, has gone through many changes but is still North Bay at its heart. As is Rory Lynch, who has called Sonoma County home for 25 years. Figuratively speaking, when Lynch was just a baby, so was the paper (as The Paper). They’ve grown up together–not exactly as brother and sister, but more as members of the same community and generation.

We thought it would be fun to bring a more distinct human element to the Bohemian‘s silver anniversary proceedings: Zero in on one case study, if you will.

And Lynch–raised in Sebastopol, schooled at Sonoma State University, and presently living in St. Helena–is our man. This dude surges with positivity, welcomes new ideas, makes a concerted effort to get involved with the community he calls home, and is open to the world beyond that home.

Though Lynch’s immediate roots are local, his family history reaches across the seas to Ireland, where both of his parents hail from. They met at a dance at an Irish cultural center in San Francisco. His mother, Ann Lynch, a nurse, came to the States when she was 25.

“My father’s family were farmers living on the west coast of Ireland–there were 13 of them living in the same house. He came over before the Great Depression. So in that sense, I’ve really appreciated what my parents have done.”

When Lynch was young, his father, Denis, came to Sebastopol and planted Gravenstein and Golden Delicious apple trees. “That was his retirement and his solitude in life–to get back to the land and working.” Lynch’s older brother Patrick still runs the orchard. “My brother’s made a great life choice to farm,” says Lynch, “and in this day and age, to do that is incredible.”

Lynch got his West County education at El Molino high school in Forestville, where he was enriched by “the standard of teachers I received–they’re just really well-experienced and had leading ideas in the community.” He then studied accounting and marketing at SSU, spending his junior year studying abroad in New Zealand. “I saw this opportunity and thought, ‘What the hell–there’s no price difference,'” he says. “It was really interesting in terms of different lifestyles and meeting such humble people.”

And what has a quarter of a century in the North Bay impressed upon Lynch? “I think we’re more free-spirited,” he muses. He notes that Sonoma County has a unique identity, “yet [the county has] taken the opportunity for development. I’d like them to co-exist. I think one can’t exist without the other.”

As far as media in the North Bay goes, Lynch says, “I think people are more aware and more informed from papers like the Bohemian. I think we have a great voice of the alternative. It’s overwhelming what the media does to people–it’s so influential and so powerful. It divides people, and it should be bringing us together.”

So now Lynch has been immersing himself in close-but-different St. Helena, where he’s lived since January, working as a CPA after entertaining job offers halfway across the country. “I had no idea I’d live in St. Helena before visiting. A friend of mine showed me the area, and he grew up here and lives in Santa Rosa. And when he comes back [to St. Helena], he says, ‘I love this place. It’s so good to me.’ So much of him grew up there. Which, certainly, for anybody, wherever they grew up, they want to go back. I think that’s a natural magnet. Sonoma County’s comfortable for me–that’s where I grew up, had my childhood. And now I’m kind of setting my roots here.

“Having grown up in Sonoma County, I always thought Napa was the rival. They were like the complete opposite. People say there’s nothing to do in Napa. You have to create something. For me, I’ve just gotten out and gotten involved. It takes time to give, to really make an investment. I wish everyone did it. People work hard, society puts so much pressure on the working class. There’s almost not time to relax and live like rural Sonoma County used to be.”

Lynch’s own travels didn’t end with New Zealand. He’s spent time in Ireland, Morocco, Italy, and elsewhere. A member of the international organization Servas (“serve” in Esperanto), which connects travelers with host households, Lynch has stayed with many families during his periods abroad, and now that he’s settling in St. Helena, he’s opening his own home as a Servas host.

“Going home to the farm, picking some apples–it’s great. And sometimes I don’t even need to go there–I just find places here in St. Helena, in Napa Valley. For me, wherever I go and wherever I live, I have to contribute my part to the community. I like that principle: Think global, act local. And I think we all have it in us.”

So thanks, Rory Lynch. You’ve been a sport.